With Biden’s Climate Plan, The Devil Is in the Details

The new U.S. president launched measures with the intention that the U.S. will lead the fight against the global climate crisis. But what is the fine print behind these measures? 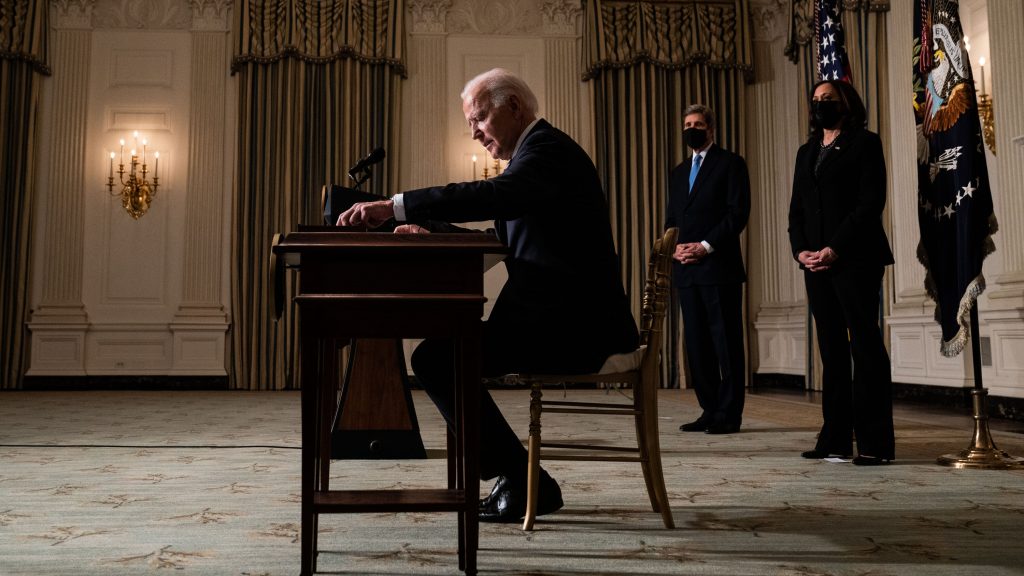 “We are not going to ban fracking, we are going to protect and increase jobs.” Joe Biden’s statement this Wednesday leaves little room for doubt. Although the recent “suspension of fracking” has made headlines, in truth he is doing nothing more than putting into practice what he declared during his campaign when he said, “I never said that I am opposed to fracking. I said ‘no to fracking on federal lands.’” That is a big distinction, as roughly 90 percent of fracking occurs on state and private land. Biden is leaving the vast amount of existing fracking alone.

The new Democratic president has an advantage when it comes to addressing climate change: he isn’t Donald Trump. When considering Trump’s outright denialism, any lukewarm action regarding the global climate crisis will be heralded as a brave action to address what scientists urge should be treated as a grave emergency.

At a press conference with Vice President Kamala Harris and the Special Presidential Envoy on Climate, John Kerry, Biden announced the creation of new climate roles in the government, thousands of jobs, and the restoration of “scientific integrity” in his administration.

Biden made good on his promise to rejoin the Paris Climate Agreement, which the U.S. had officially left in November after years of effort by the Trump administration. Additionally, he revoked the permit for the Keystone XL pipeline. Peter Kalmus, a renowned climate scientist and activist, responded to the announcement on Twitter: “If every day from here on out we make progress equivalent to shutting down the Keystone XL pipeline it might be OK. We need a Keystone a day. That’s what “out of time” really means.” According to Kalmus, the Paris Agreement, which is now five years old, is not “even close” to the actions that are really needed.

“We are running out of time” is one of Biden’s favorite phrases in regards to the climate crisis. With his recent climate directives, Biden is trying to assert his commitment, on behalf of the United States, to address climate change — despite the fact that the U.S is the second largest contributor to pollution in the world.

One of his goals is to “empower” U.S. workers and companies to lead what he calls “a clean energy revolution” so that the energy sector will become carbon free by 2035, and another is to commit the U.S. towards becoming a zero-emissions economy by 2050 — 30 years is an interesting conception of what it means to be “running out of time.”

After four years of underfunding environmental policies and promoting ecologically destructive practices (Trump’s final attempt at anti-climate policy was to approve licenses for oil extraction in the Arctic region), the White House’s recent press briefing emphasizes that Biden’s climate measures target the “talent and innovation” of workers to revitalize the U.S. energy sector, emphasizing the conservation of natural resources, the creation of well-paying union jobs, and the assurance of environmental justice for communities that have been the most harshly impacted by the effects of climate change and environmental degradation.

The United States’ Contribution to the Global Climate Crisis

This global imperialist power is the second largest polluter in the world, following China. The United States possesses the power to ruin global ecosystems and set off veritable “climate bombs” with a mere executive order. Barack Obama, under whom Biden was vice president, boasted of massive oil production under his presidency — for his first seven years in office, he presided over rising oil production in each year. And despite widespread condemnation of fracking for the risk it poses, including land contamination, environmental destruction, and increased seismic activity, he allowed its continuation during both terms.

Despite Biden’s recent suspension of new licenses, he has far from eradicated fracking. Since 2010, this practice has multiplied exponentially. In order to even come close to his commitments to “clean energy” and “zero emissions,” Biden would have to undo the detrimental harm of the previous Democratic administration, let alone the undeniable harm caused in the last four years under Trump. And that is only including what was done within the United States itself.

Even as the U.S. tries to adapt five years later to the weak objectives put forward in the Paris Agreement, experts agree that even if all the signatory nations fulfil their goals, warming would still be around 2.6-3.1° C by the year 2100. That prediction far exceeds the 1.5°C increase limit set by the climate treaty.

It is clear that Biden will need to do much more than simply not being Trump in order to combat a scenario of possible climate and ecological collapse. The insufficient, symbolic, and belated measures of the world’s greatest power only confirm what thousands of signs read during the massive climate mobilizations: “The system must be changed, not the climate.”

A version of this article originally appeared in Spanish on La Izquierda Diario.