House Democrats added $1.9 billion of funding to the violent Capitol Police that participated in the white supremacist violence of January 6, proving once again that they stand with the racist cops. Three members of the Squad abstained, ensuring the bill would pass. 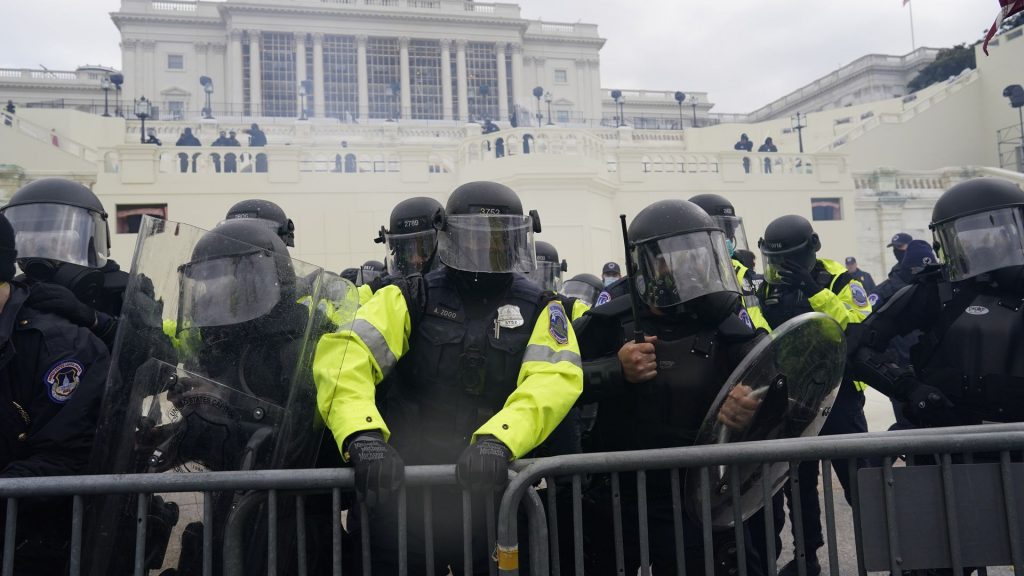 Last week, the House passed a bill that would spend $1.9 billion in supplementary funding to beef up Capitol security as a response to the January 6 riots at the Capitol. It passed by just one vote. While House members Ilhan Omar, Ayanna Pressley, and Cori Bush voted against the bill, Alexandria Ocasio-Cortez, Rashida Tlaib, and Jamaal Bowman voted “present,” ensuring the passage of the bill. This bill supports the expansion of the police force and increased funding for Washington D.C.’s repressive mechanisms. Democrats claim that this is necessary to fight the Right, while the cops worked as allies and accomplices to the right-wing white nationalists threatened the lives of AOC, Tlaib, and Bowman themselves.

The uprising at the capitol was carried out by both the white nationalists and the United States Capitol Police (USCP) working in tandem. The cops literally invited the mob into the buildings, moving barricades and taking selfies with them. Police in other local forces from all over the country attended, making it ever more clear how tightly the police and white supremacists are intertwined (and overlap). They did this with the full knowledge that they were being recorded and embraced the publicity.

The Wall Street Journal reports that the bill includes overtime pay, retention bonuses, and “trauma support” for Capitol Police as well as money for more “riot-control tools and training,” and the Capitol complex would get “new cameras, reinforced windows and doors, and a Quick Reaction Force to back up police in case of emergency.” In other words, this bill provides more pay and high tech tools for the Capitol Police— the same police force that repressed the Black Lives Matter protests only a year ago. The depiction assumed and upheld by the bill— that the Capitol Police are somehow vulnerable or victims in need of protection— is particularly galling. Compare their high tech gear to the healthcare workers wearing garbage bags as personal protective equipment.

So far, none of the three neutral members have issued any explanation about their decision. The bill passed 213 to 212, with every House Republican voting against it, in continuing denial of the menacing rise of violent racism in the country. House Democrats other than the six members of the squad all voted in favor of the bill. Had all six members taken a stand against it, the legislation would have been struck down.

Let that sink in. The DSA endorsed “democratic socialists” in Congress were the votes that ensured increased funding for the Capitol Police.

This neutrality on the part of three members of the Squad comes on the exact same day that all six members of the Squad signed a letter to House leadership, demanding that the process of “qualified immunity” — which would allow police to be civilly prosecuted after their all-too-common murders of Black and Brown people — be ended in the negotiations for police reform. The letter identifies police violence as “a weapon of structural racism” that “continues to have devastating and deadly consequences for Black and Brown lives across our country.”

The letter was a response to House senators stalling the George Floyd Justice in Policing Act.  Democratic Senator Cory Booker said he needs time to “negotiate” the issue of qualified immunity while the Democratic House Majority whip Jim Clyburn said, “I will never sacrifice good on the altar of perfect. I just won’t do that.”

So how can the same progressive politicians publicly affirm their dedication to ending police violence, hand their leadership a letter strenuously arguing for greater accountability and then, just a few hours later, shrink from confronting the issue at a legislative session? The contradiction is telling.

The only explanation given thus far has been Bowman’s, who, in a defense of his refusal to block the bill’s passage, said “There are some things about the bill that I support, like making sure our custodial staff and our cleaners have the resources they need to respond and deal with this trauma. But there are other parts of it that I don’t support, like adding more funding to police budgets.” Yet almost none of the funding went towards trauma counseling, and the three Squad members who voted against the bill pointed out that it dedicates “fifty times more money to the creation of a ‘quick reaction force’ than it does to counseling.”

The abstention on the part of the three Squad members reveals that, as they have many times before, the Squad as a whole often buckles under pressure from the Democratic Party leadership as well as following them into contradictions of their own stated goals, including ending police violence and combating racism. Ultimately, they side with the Democratic Party, betraying the primary demand of the Black Lives Matter Movement: defunding the police.

This reveals that these House members cannot resolve the tension between an understanding of racist police violence in this country and what they feel is a necessary use of this violence— protecting what AOC called the “Citadel of Democracy.” They seem to have forgotten what actually happened on January 6 when Capitol police invited armed right-wing protestors into Senate and House chambers. And while the violent rise of the Right is absolutely harrowing, her description of the seat of imperialism is entirely without merit.

The United States Capitol contains the forces that continue to not only support, but also justify the atrocities carried out by the Israeli state against the people of Palestine. It is the place where politicians devote over $700 billion dollars annually to “defense spending,” including billions used to bomb the citizens of other nations. This “Citadel of Democracy” struck down relief packages during the Covid-19 crisis,  spending relief money on the theft of indigenous people’s land and increased budgets for cops instead. It regularly carries out massive austerity programs. AOC’s profound and fundamental mischaracterization of the U.S. government is what leads members of the Squad to insist they can change the Democratic Party from within.

Indeed, police violence actually supports white supremacy, and it cannot be redirected or transformed into a weapon to defend the targets of racist hatred.

It is impossible for the racist U.S. government to police itself or to provide justice and protection to marginalized communities. The state, despite its protestations that it is simply trying to defend itself, does ultimately need this protection from our communities when inevitable uprisings break out as workers, especially BIPOC workers, stand up to defend themselves.