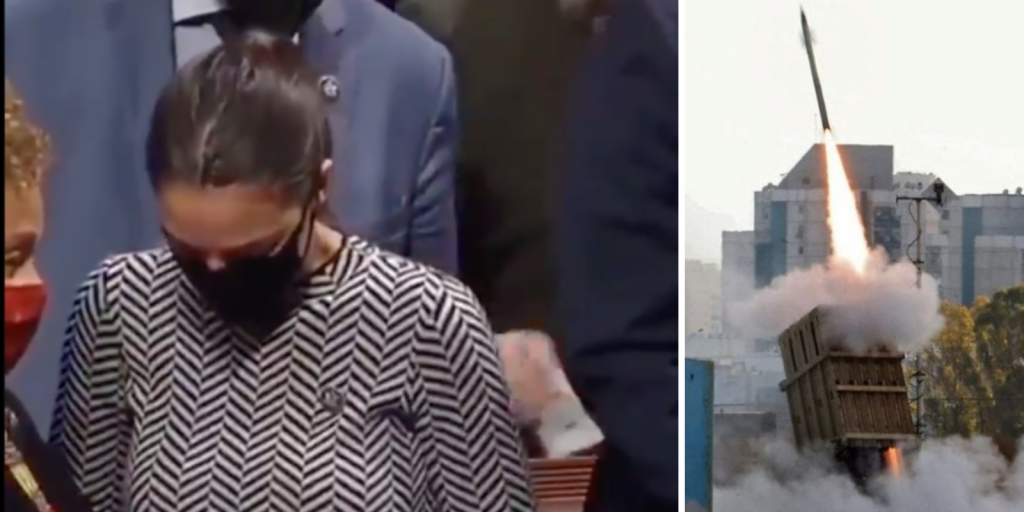 The final vote in the House was 420-9, with 2 people voting “present.” Notably, Jamaal Bowman, a DSA-endorsed representative from New York, voted “yes.” Alexandria Ocasio-Cortez (AOC) changed her vote from “no” to “present.” One Republican voted against the measure.

It’s clear that support for apartheid and the ethnic cleansing of Palestinians is bipartisan.

This vote comes after the House of Representatives voted 316-to-113 for a $740-billion annual defense bill, which was $24 billion more than President Biden had even requested.

The Iron Dome funding initially seemed to be in danger as members of the Progressive wing of the Democratic Party threatened to tank the bill it was attached to over increased funding for the Israeli army. However, only a day after the provision for military aid to Israel was taken out, it was back on the floor as a standalone bill. It was later revealed that Yair Lapid, Israel’s minister of foreign affairs, called U.S. House Majority Leader Steny Hoyer to demand that the funding be pushed through. Hoyer explained that the Progressives’ opposition to the bill was merely a “technical delay.”

This latest piece of funding comes only a few months after Israel murdered over 250 Palestinians, including at least 63 children. Israel’s bombs destroyed homes, buildings, and targeted hospitals. And the attacks haven’t stopped.

In just the last month, after 6 Palestinian political prisoners heroically dug their way out of a maximum security prison, there were three nights of airstrikes in Gaza in retaliation. Only two weeks ago, one Palestinian was murdered, and 15 more people were wounded at an Israeli checkpoint.

Israel is an apartheid state engaging in ethnic cleansing of Palestinians. Its goal is nothing less than the eradication of Palestinians from their land. The Israeli state organizes blockades to starve Palestinians and checkpoints to make life and mobility all but impossible. Palestinians are terrorized daily by Zionist soliders and bombs.

Of course, this campaign of murder and terror is executed with the military and political support of the United States. It would not be possible without the billions of dollars the U.S. government sends every year to its ally in the Middle East. In 2020 alone, the U.S. provided $3.8 billion to Israel. These policies are truly bipartisan. The Iron Dome project was created by the Obama administration, which provided $225 million for the endeavor in 2014. As Rhys Machold explains in Jacobin, “A single Iron Dome interceptor costs around $50,000, while each battery that fires these interceptors comes with a price tag of around $50 million. In the 2012 offensive alone, some estimates of the system’s cost ranged between $25 and $30 million. U.S. taxpayers picked up most of the bill.”

Progressives in Support of Zionism

New York State representative and DSA member Jamaal Bowman voted yes on this legislation to fund the Iron Dome project. He is the darling of the DSA, headlining this summer’s convention event entitled “Jumpstart Socialism for A New Tomorrow.” So far, Bowman hasn’t said anything about this vote, but it isn’t the first time he’s voted for military aid to Israel — In August, he voted for $3.3 billion in military aid.

While some members of the Squad, like Rashida Tlaib and Ilhan Omar, voted no on the Iron Dome, Alexandria Ocasio Cortez broke with the rest of her peers, changing her vote at the last minute from “no” to “present.” She was filmed with tears in her eyes as she refused to oppose sending money to Israel to murder Palestinians.

AOC released a letter today explaining that the bill is actually worse than we thought because it adds extra funds on top of what was already committed to the Iron Dome. She goes on to justify her decision by claiming that there were heightened tensions and a rushed vote, but she never explains why she changed her vote.

But it’s pretty clear what happened.

Jezebel reports that “many reporters speculated [the vote change] was a necessary strategic move to position herself to run for Senate in New York (The congresswoman said earlier this year that she’s “trying to decide” whether to mount a primary challenge to Sen. Majority Leader Chuck Schumer in 2022).”

The meaning of this is clear: AOC has no problem throwing Palestinians under the bus if it means furthering her career in the imperialist Democratic Party. So much for “pushing the Democratic Party to the left.” In fact AOC and the DSA are only being pushed to the right.

AOC’s vote comes just a week after the “Tax the Rich” dress scandal at the Met Gala. Apparently for AOC, we must “tax the rich” so that the United States can continue to spend billions to support Zionist ethnic cleansing.

But she isn’t the only member of the Squad who has a contradictory position on Israeli apartheid.

Although she voted “no” on the Iron Dome funding, Representative Ilhan Omar later stated, “This is not about one country. If human rights are truly to guide our foreign policy, we need to act like it everywhere. Otherwise, our words ring hollow.” This comes after she joined Jamaal Bowman in August to vote for more funds for the Israeli war machine.

When are human rights ever a guide to U.S. foreign policy, which organizes coups around the world? Are we really supposed to believe that a member of the Democratic Party — whose president is currently looking for people to facilitate imperialist terror at Guantanamo Bay — is actually concerned about human rights?

Where Is the DSA?

The DSA is being tied into knots by the contradictions opened by their representatives’ policy choices. On the one hand, the DSA claims to support Palestine and the BDS campaign; in reality, the DSA props up and canvasses for politicians who vote to send military funds to Israel. This isn’t the first time that DSA elected officials voted for funds for Israel.

The DSA international committee issued a tepid statement in response, stating: “Most disappointingly our DSA members in Congress like AOC and Jamaal Bowman—didn’t vote against this spending. It is up to us, as socialists, to build enough working class power to ensure that votes like this can never happen again.”

The statement also includes a link to a tweet saying, “We continue to call on all elected officials, especially those endorsed by DSA, to support the Palestinian call to defund ethnic cleansing and fully boycott apartheid.”

This response raises more questions than it answers. How will such a movement be built? Will it involve breaking with Bowman and AOC? Will it involve demanding that no DSA-endorsed candidate ever votes funds for Israel?

The International Fight Against Zionism and for a Free Palestine

Palestinian people, both in Paestine and around the world, have been on the front lines of the heroic struggle against Israeli occupation and for a free Palestine. From the general strike in May, to the six prisoners who dug their way of prison, to the consistant protests and actions against further encroachments on Palestinian land, they are fighting against Israel and its allies.