Women Across Europe Mobilize Against Gender-Based Violence and Neoliberalism

Hundreds of thousands of women across Europe participated in demonstrations against violence and economic oppression for International Women’s Day this year. These demonstrations took place in the context of incredible class struggle underway across the continent. Many of the mobilizations were subject to severe repression by the police, who fight to uphold the sexist and violent institutions of the state. 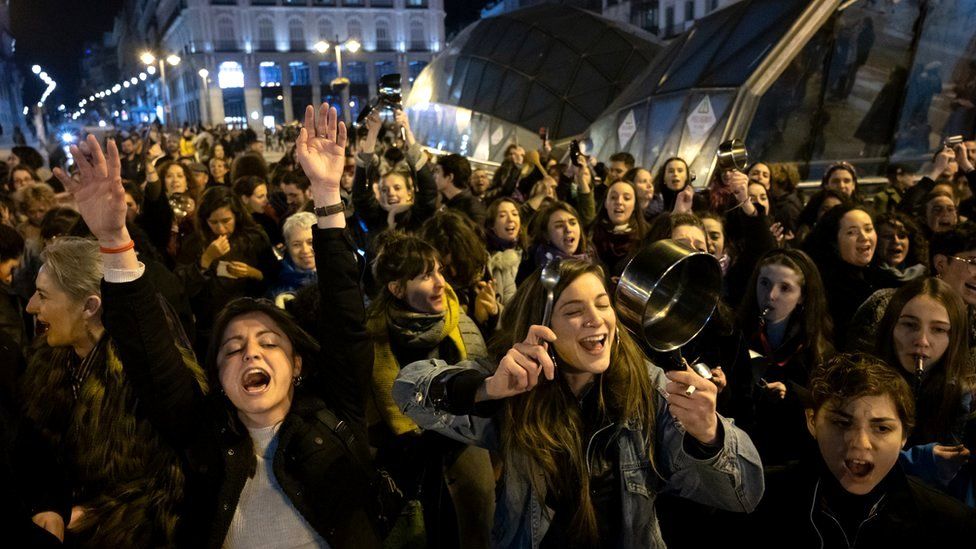 Joining millions of women across the world, hundreds of thousands of people participated in demonstrations across Europe on International Women’s Day to fight for the rights of women and highlight the injustices they experience under capitalism. These demonstrations took up women’s issues in every area of society, from the state and domestic violence to economic inequality and immigration. In the context of the crises created by neoliberalism and increased class struggle, these demonstrations illustrate the need for the fight for women’s liberation to link up with the wider struggle against capitalism.

The March 8 demonstrations in France this year were a continuation and reinvigoration of the strike movement against Emmanuel Macron’s pension reform plan that has mobilized millions of workers across different sectors. Women have played an important role in the mobilizations from the beginning, protesting not only the pension reform plan itself but also the high levels of precarity and unemployment that affect women disproportionately in France and around the world.

Prime Minister Eduoard Phillipe and the government claim that women will be the “big winners” if the reform passes, but the chants and marches against the plan by tens of thousands of women in the streets this March 8 told a different story. In addition to marches and other demonstrations, performances of the now-famous dance “À cause de Macron” (“Because of Macron”) broke out across the country, highlighting the ways in which the pension reform targets women. Connecting the strikes against the pension reform with the fight for women’s liberation, their message was clear: women must not only fight against a pension reform which will lead to generalized reduction in pensions but also against a president and government which endangers women’s lives and livelihoods.

In Paris, 60,000 people participated in actions across the city, including many workers in the education, law, and student sectors who have led the fight against the pension reform. However, as France’s major unions did not call mobilizations in solidarity with International Women’s Day, they marched as individual workers. In addition to economic demands, women also participated in demonstrations against gender-based violence, particularly domestic violence, which has reached high levels in France in recent years. The protests also targeted state violence after a traditional nighttime demonstration on March 7 was harshly repressed by club and tear-gas wielding riot police who injured dozens of people.

In Toulouse, people came out into the streets in record-breaking numbers. The local authorities prepared for a thousand people to participate in demonstrations, but nearly 10,000 people — including teachers, lawyers, and Yellow Vests — mobilized throughout the city. The socialist feminist organization Du Pain et des Roses organized actions and led substantial contingents in Toulouse and other cities, including Paris.

In the second year of International Women’s Day in Germany, women demonstrated in the country’s major cities, including Berlin and Munich. In Berlin, nearly 20,000 people participated in marches and a rally in Alexanderplatz. At the rally, speakers intervened against racism, for the rights of LGBTQ+ people, and against increasing precarity as a result of outsourcing and temporary contracts, demonstrating that the struggle for women’s liberation is unequivocally class struggle.

There were also large demonstrations in front of one of Berlin’s major hospitals in support of a facility workers’ walkout and strike that was suspended because of the coronavirus. The workers of Charite Facility Management (CFM), who are predominantly women, are fighting for better working conditions and higher wages in the face of a rising cost of living under the neoliberal regime of Angela Merkel.

Women demonstrated in Spain in massive numbers again this year, protesting economic inequality and gender-based violence. Though participation was lower than in previous years, close to 200,000 demonstrators (by conservative estimates) took to the streets. They marched to the beat of drums and under banners with slogans such as “Together against inequality and precariousness!” and “Feminist revolt. With rights, without barriers. Feminists without borders!”

The largest demonstrations took place in Madrid, where marches attracted over 120,000 people despite concerns over the spread of coronavirus. There were significant demonstrations in other areas of the country, including Barcelona, Zaragoza, and Bilbao, which brought tens of thousands of people into the streets to participate in marches, rallies, pickets, and partial strikes.

Contingents of the socialist feminist group Pan y Rosas, which has sister groups in France, Germany, and around the world, brought hundreds of people into the streets under an independent, anti-imperialist, and uncompromisingly socialist banner. In contrast to liberal calls for more opportunity and representation under capitalism or reformist calls to put the fight for women’s rights in the hands of parliament, Pan y Rosas demonstrated that the fight for women’s liberation is tied to the fight against capitalism.

Women across Spain marched against gender-based violence and the central role the state plays in perpetuating violence against women. Performances of “A Rapist in Your Way” (“Un violador en tu camino”), a feminist fight song that began in Chile and has since become a global protest against state-sponsored violence, were staged throughout the day. Despite high hopes in the reformist government of Podemos to better the lives of working class women, legislation has done little to end the gender-based violence that is ingrained in capitalist society. These demands were also linked to protests against anti-worker austerity legislation that affects women inside and outside the traditional workforce.

(A demonstration in Zaragoza marches behind the banner: “If we stop, the world stops.”)

Various groups also participated in partial strikes and pickets. The participation in and reach of such actions was lower than previous March 8 demonstrations, in part because the feminist and labor movements did not call for a general, coordinated strike and consequently work stoppages were mainly localized. However, even on a small scale, these actions demonstrate the power that women have as a crucial part of the workforce to put a stop to capitalist production and fight for the demands that affect women and the working class as a whole.

Women in Turkey’s largest city were banned by the government from participating in demonstrations for International Women’s Day. The authorities closed down Istanbul’s major streets to prevent mobilizations. In protest of these and other undemocratic measures that have escalated in recent years, over a thousand protesters attempted to march anway. They tried to break through police barricades and clashed violently with riot police. The several dozen women who made it through the barricades were severely repressed — police fired tear gas and blanks to disperse the crowd, and arrested demonstrators.

The demonstrations of March 8 this year took place in the context of incredible instances of class struggle that have erupted across Europe in reaction to the crises opened up by neoliberalism — from the national strike wave in France to the general strike in Catalunya last year. Women have been on the front lines of these struggles from the start, in their workplaces, in their schools, and in the street.

This phenomenon was expressed in the slogans of the various March 8 mobilizations which included critiques of generalized precarity, insufficient wages, and neoliberal policies that disproportionately affect women inside and outside the workplace. However, while many of the women who have lead struggles in their workplaces in recent years took part in International Women’s Day, they did so as individuals or in small, localized actions; there was no wider call from within the labor and feminist movements to coordinate strike actions to truly fight for the demands being raised by millions of women across Europe. In the spirit of the first International Women’s Day, we must recognize that truly advancing the struggle for women’s liberation requires linking up the feminist movement with the labor movement and other sectors of society in coordinated action — action that can confront capitalism and battle against it, united, from every angle.