International Women’s Day (previously known as International Working Women’s Day) was created by socialists to commemorate the women garment workers’ strike in 1908. These two aspects of March 8 — workers’ mobilizations and socialism — must be forcefully taken up in the Trump era. 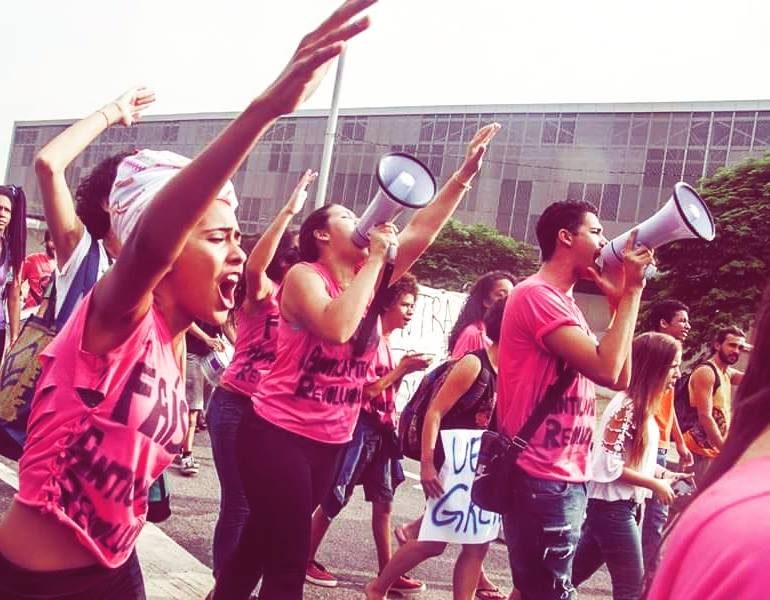 What is International Women’s Day?
In 1908, garment workers organized a mass strike in New York City to protest their working conditions. They demanded better pay, suffrage and shorter working hours. Most of these 15,000 women who mobilized were immigrants.

In 1909, the Socialist Party of America first called a day to honor the garment workers’ strike. In 1910, Clara Zetkin, a German socialist, called on the International Conference of Working Women to organize International Working Women’s Day, and her proposal was ratified by women delegates from 17 countries.

A few years later, in 1917, thousands of Russian women, workers, and wives of soldiers, took to the streets on March 8 to demand peace and bread. This event started the uprising that would overturn the Tsarist regime. Importantly, this year’s International Women’s Day will also mark the 100th anniversary of the beginning of the February Revolution.

It has been 100 years since the Russian Revolution that was led by the Bolsheviks who saw women’s rights as a central concern. They legalized divorce and abortion and discussed the abolition of domestic labor, the “invisible” unpaid work by women in the home. They also questioned the traditional family structure, which is ideal for capitalism but not for a society that centers women’s liberation. They believed in free love and the end to mandatory maternity for women. Only a few years after the Russian Revolution, women in Russia had more rights by law than most women in the world have today. The Bolsheviks aspired to even more than formal rights protected by law– they wanted to provide the material and structural conditions for women’s liberation.

The revolutions of the first half of the 20th century were betrayed by the Stalinist leadership. Consequently, the idea of socialism has been associated with Stalinist bureaucratization, which rolled back many of the victories of the Russian Revolution, including women’s rights. As Argentine member of the PTS, Andrea D’Atri argues, “Under the bureaucratic Stalinist regime, the Bolsheviks from the generation of the October Revolution were executed during the Moscow trials, and the Left Opposition was persecuted, on the charge of being “Trotskyists”. While they were sent to concentration camps and murdered, abortion became illegal, prostitution became a crime, and homosexuality was recriminalized. This happened in conjunction with a revival of traditional stereotypes about womanhood as delicate creatures who belong in the home…” Under Stalin, the women’s commission within the Central Committee of the Communist Party was dissolved, and in the 40’s the regime rewarded women for the number of children they gave birth to.

While there was then a partial return to the old patriarchal order in Soviet Russia, the Red Scare in the US deepened stereotypes about communism in the West. Many misconceptions are born of the idea that communism and Stalinism are one and the same, that under communism women have absolutely no rights or freedoms. However, the Bolsheviks of 1917 under Lenin and Trotsky had a truly revolutionary vision of women’s rights–one that we must take up today.

The imperative of remembering this vision and fighting for its realization is all the more evident since the feminism of the 60’s and 70’s that had the potential to be radical was co-opted by the Democratic Party in its commitment to capitalist interests. The feminism that once served as a challenge to structural inequalities was transformed into neoliberal feminism. Think of Gloria Steinem, a feminist icon who supported Hillary Clinton.

Part of the problem is that the very idea of revolution continues to be viewed as utopian, when in human history revolution has been the rule, not the exception. When oppressed people in the US have fought for rights within the limits of the capitalist system, they have typically ended being co-opted by the Democratic Party, as demonstrated by to some degree or another by the Civil Rights Movement, the women’s movement and the LGBT movement. This shows that the real utopianism is believing that the Democratic Party and its immense political machine can be put at the service of the oppressed and the working class. It is therefore essential for the feminist movement to realize that the struggle for women’s liberation must be a revolutionary struggle not only against sexism and discrimination but against the capitalist patriarchy and all forms of oppression. There must be a material basis for women’s liberation–it should not only be reflected in the laws but it must be rooted in the structure of society.

At the same time, it appears that the so-called millennial generation does not share their parents’ fear of the word socialism. The surprisingly massive support for Bernie during the 2016 election campaigns illustrates this trend. This is encouraging, especially in the current context of the rise of the right around the world — from Brexit in the UK, to the right-wing coup in Brazil, to the rise of Trump in the US. The present moment, then, is a critical one. 100 years since the Russian Revolution, and after four decades without a revolution, we are entering the age of Trump, which seems to have produced an even sharper increase in mobilizations across society but notably among the youth and women.

So, in this moment, with this history, what kind of March 8 do we need?

We must take up the historical socialist meaning of International Women’s Day by not only making demands that will truly liberate women, but by pursuing the socialist strategy of building towards a general strike.

When we call for a strike, the word should mean something. It is not just a protest. It means stopping labor. Yet, it’s more than just individual women walking off the job. It means organizing at our workplaces and places of study — not as individuals, but along with our co-workers. It means engaging in a political struggle side by side with our co-workers to demand that the union call a strike.

Union bureaucrats, who for the past decades have allowed attack after attack to pass without a struggle will not easily call a strike. That is why we must build power with our co-workers in the struggle against apathy and stagnation in our unions. Enough pressure will force the unions to cave, or be replaced by radical rank and file leadership.

It is neoliberal feminism that asks us to liberate ourselves as individuals. The idea of individual mobilizations has permeated even anti-capitalist feminism that similarly does not put forward a strategy for us to mobilize in the places where we are directly tied to capitalist production: the workplace.

Too many times, we go to a protest with our friends, chant in a sea of strangers and then return home. Organizing at our workplace means building power to continue to fight Trump; it means building political experiences with our co-workers, the people we see every day. We know the attacks will continue, so it is essential that we build political power with people who will fight back quickly, who will discuss politics regularly and build towards more radical ideas. Organizing in the workplace also means shutting down the very systems that make capitalism function- the places of capitalist production.

The right to strike, our basic right as workers, has been badly curtailed in the United States. In New York City, the Taylor Law keeps public employees from being able to go on strike. Such laws have been passed around the country. The strike, the most basic tool of working class resistance against the bosses, is being taken from us — usually without a fight. The strike is a basic right of the working class. We must fight to get back our right, and we must organize this fight with the rank and file members of our unions.

We must also reclaim the legacy of revolutionary socialism. During World War I, Rosa Luxemburg wrote that the choice was “Socialism or Barbarism.” At a recent march, a sign read “Socialism or Trump,” and there is much truth to this. The misery that capitalism brings is clear — the destruction of the environment, the absurd inequalities, the drone bombings abroad (three per hour in 2016), and the police murders and mass arrests domestically. And let’s remember that the Democratic Party (including Barack Obama, Bernie Sanders, Keith Ellison and Elizabeth Warren) implemented and supported these policies. The Democratic Party, just as the Republican Party maintains a political, social and military hold on Mexico and Latin America as a whole. It has devastated the Middle East with its bombs and helped create the global refugee crisis. In the US, our fight must be for an anti-imperialist movement, as Rosa’s was in World War I.

Some class reductionists argue that discussing women’s issues in the socialist movement divides the ranks of the working class. However, it is sexism that hurts and divides the working class, first and foremost by hurting working-class women. It also drives wages down for everyone when women and other groups are paid less, in particular immigrant women and women of color. It is the capitalists and the state who perpetuate and inflict sexist violence through the direct violence of police brutality, mass imprisonment or through the violence of poverty and debt. It is the state and the capitalists who perpetuate sexist ideas through schools and the media, which is in the hands of just 6 corporations, as well as by structuring society so that nuclear families are needed for our very survival.

On this March 8, we must remember the history of International Women’s Day. We must remember the power of women organized to strike, as women did in 1908. We must remember the power of the working class, who can overthrow the political regime, as the Russian people did, following the women’s uprising. The working class can overthrow capitalism, as the Bolsheviks did after the October Revolution, and begin to build a society that provides women with all the rights that capitalist democracies refuse us, and the material basis for true liberation. We must begin to organize, not as individuals, but as workers and students in our workplaces and schools.