Women’s Health and the Implosion of Trumpcare

The failure to repeal and replace Obamacare marks a major defeat for Trump and the Republican Party. The debate about women’s health was central to the debate and the disagreements among the Republicans. 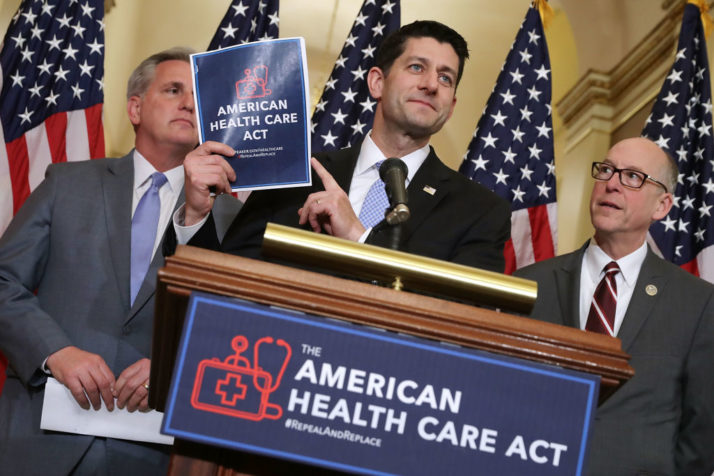 Being President is not going very well for Donald Trump. From Michael Flynn’s resignation, to the repeated court rulings against the Muslim Ban, to James Comey’s confirmation of an FBI investigation of the Trump team in relation to Russian interference in the 2016 election, Trump’s Presidency has been marked by failures and scandals. The latest defeat was a centerpiece of Trump’s campaign promises- to repeal and replace Obamacare, also known as the Affordable Care Act.

After weeks of deliberation and tweaks to the original Republican proposal, Trump announced that the House of Representatives would vote on Friday, March 24. The vote was an ultimatum to the Republican majority in the House: vote for this bill or live with Obamacare. But on Friday, instead of overseeing a vote, the Speaker of the House, Paul Ryan, pulled the bill to prevent an embarrassing showing for the doomed legislation.

Repealing Obamacare was a central promise of not only Trump’s campaign but of hundreds of Republicans in the House and the Senate. This was their big chance to deliver their promise, and they very publicly choked. How could this happen?

Paul Ryan provided some answers in his announcement to the media after deciding to pull the bill. He said, “This issue had a big difference of opinion not whether we should repeal and replace Obamacare, but just how we should replace it. And that is the growing pains of governing. We were a 10-year opposition party, where being against things was easy to do. You just had to be against it. And now in three months’ time we tried to go to a governing party where we actually had to get 216 people to agree with each other on how we do things and we weren’t just quite there today. We will get there, but we weren’t there today.”

The process of coming up with and voting for legislation highlighted divisions between a strong ultra-right wing in the Freedom Caucus and a more moderate wing of the Republican Party. According to the New York Times, 33 Republicans stopped the Trump health care plan, including 10 moderates, 15 hard line right wing people and 8 “others.” Jessica Glenza of the Guardian describes the situation “a lot like a tall man trying to stay warm under a short blanket. When Republicans pulled in one direction, they lost coverage at the other end.”

Despite saying otherwise, Trumpcare would leave millions of people uninsured and include many changes that would have particularly affected women. Cuts to women’s health services were at the heart of the Republican health care plan but were also part of the push and pull within fractions of the party. Trumpcare would have changed access to abortion coverage by tightening Hyde amendment restrictions, thereby making health care plans that cover abortion move expensive. It would have partially defunded Planned Parenthood by cutting the federal funding that could be used for services there. It would not allow women to use Medicaid at Planned Parenthood, which would disproportionately affect low income women. These cuts were too much for the moderate end of the Republican Party and insufficient for the right wing.

On Thursday, the day before the vote, the Freedom Caucus had a meeting with the White House where Trump agreed to remove federal health insurance requirements for basic benefits. These include maternity care, emergency services and mental health. By removing the essential benefit provision, he removed the provision that required plans to cover maternity and newborn babies, most likely leaving them without health care. Another change to appease the Freedom Caucus was the “manager’s amendment”. It included the ability to revoke Medicaid from new mothers who do not find work within two months of giving birth.

Jen Psaki of CNN says, “For the millions who marched in the streets the weekend after the presidential inauguration as a part of the Women’s March this should be the next thing that gets those pink hats out of the closet.” Even a sector of Republicans agreed that these cuts were too much. Many of the defectors from the Trump-care plan came from the “centrist” group, the Tuesday Group, who balked at the Medicaid cuts.

Caught between the right wing and the moderates, Donald Trump was handed his first legislative defeat on his first major legislation presented to Congress. Even Ryan had to concede that Obamacare would stand for the foreseeable future and that Republicans would have to move on to tax reform and securing the border. In other words, Republicans will move on to attacking immigrants and poor people in other ways.

Some have focused their critique of the Trump plan on the fact that many of these plans were made in committees and meetings where there was not a single woman present.

This lack of women’s representation demonstrates a complete disdain for women’s perspectives and the sexism of the Trump administration. However, as Ivanka Trump moves up in the ranks to having a White House office, the critique cannot be simply that there were no women present. The presence of Ivanka Trump and Kellyanne Conway would not have changed the character of this health care plan.

Thus, the fight cannot be just for women’s representation. It must be for health care that covers all people and gives particular attention to women’s health. The problem is not only that there were no women present at Trump’s meetings. It is that the US is the only industrialized country that does not have free, universal health care. The problem is that people continue to suffer under Obamacare’s overpriced premiums that guarantee the profits of the insurance industry. After the massive January 21 Women’s March protests and the more radicalized March 8 Women’s Strike, we need a movement to go beyond stopping Trumpcare to fighting for free universal, quality health care.