Women, the Bolsheviks and Revolution

On this International Women’s Day, we publish an interview with Wendy Goldman, author of Women, State and Revolution, about the Bolshevik’s ideas of women’s liberation after the 1917 revolution. Particularly, she addresses how the Bolsheviks sought to change women’s material conditions as the basis for women’s liberation. This debate could not be more relevant in a time when despite equality in law, there is no equality in life and a time when female Presidents around the world are no guarantee of women’s basic rights. 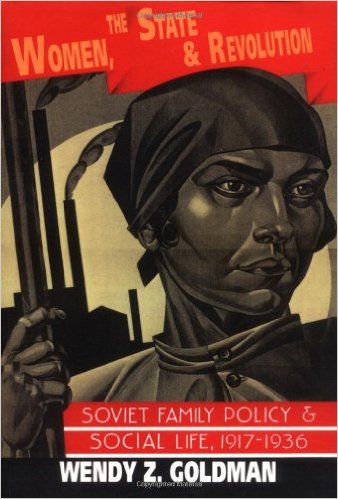 In the first chapters of Women, State and Revolution, one of the main subjects is the innovation resulting from Russian Revolution regarding to civil rights, especially for women. Which are the most important ones for you?

At the time, in 1918, the most important rights for women included equality under the law, the right to divorce, and the right to free and legal abortion. These rights were essential to women’s ability to become independent of patriarchal institutions such as the Orthodox Church and other religious authorities, and the control of their fathers and husbands. Equality under the law gave women the right to control their wages and property, maintain a claim to their children in the event of divorce, and to decide where they wanted to live, go to school, and to work. These rights did not exist before the revolution. Today, in many parts of the world, many women still do not have basic civil rights or equality with men. I think that basic civil rights – the right to be treated equally with men in terms of employment, political participation, education, social roles, and opportunities – are still a pressing issue. Under capitalism, the right to a living wage is an essential right for both sexes. If men and women throughout the world had the basic right to employment and to a wage that could support a family, many current social problems would disappear.

Besides basic formal rights, Bolsheviks believed that women liberation would be impossible if they weren’t able to socialize housework. This is a very interesting approach; even today it remains as a debate within Feminism (Marxist and non-Marxist). Why do you believe they focused on this problem?

The Bolsheviks focused on the socialization of housework because they believed that women’s liberation depended on their economic and financial autonomy from men. If a woman had to depend on a man to support her, her ability to make her own choices and decisions in life would be limited by his financial control. Yet the Bolsheviks believed that if women were hobbled by responsibility for housework, they would not be able to enter the waged labor force on an equal basis with men, or attain educational equality and opportunity. To be equal with men in the public sphere, women had to be freed of their unequal burden for household labor. Cleaning, shopping, cooking, washing, and care of small children, in short, all the unpaid labor that goes into what Marx termed “the reproduction of labor” on a daily basis, take a great deal of time. The Bolsheviks hoped to free women from the more boring, burdensome aspects of this labor to enable them to participate fully and actively in society. The Bolsheviks did many work/ time studies of the daily number of hours that working-class men and women devoted to household labor. What they found was that after work, men read the paper while women washed the clothes. Men socialized with friends while women took care of children. Men played chess, joined clubs, talked politics, played music, read books, and went for walks, while women did the cooking, cleaning, and shopping. In short, men were able to develop themselves as human beings while women served the family (and men.) The Bolshevik solution was to socialize as much household labor as possible: to create public dining halls where people could take their meals, to build laundries to wash sheets and clothing, to create daycare centers or nurseries for children, and to reduce household labor to a minimum. People who worked in these enterprises, both men and women, would be well paid and respected as workers. Household labor, or a good portion of it, would be socialized and paid. Women would be free to pursue waged work, to go to school, and enjoy leisure time on a equal basis with men. The Bolsheviks had an excellent idea, although the state was too poor to make it a reality.

It is remarkable that Bolsheviks had held such an open politics regarding personal relationships, especially considering the backward social and cultural frame. Why do you believe they decided to include free love or questioning hierarchic parents-children relationships?

The idea of “free love” goes back many hundreds of years. It has a long history! Many movements for social justice, including early Christian sects, dreamed of the idea of love unfettered by economic considerations. The Bolsheviks came from a long line of socialist thinkers and activists, both utopian and Marxist, who sought to create better and freer lives for women. They were also aware, at a very early stage, of the need for “children’s rights,” or the right of young people to be free of the tyrannical or abusive power of parents, and fathers, in particular. In a patriarchal culture, fathers exercise tremendous control over mothers and children. They make decisions about marriage, education, and work. The Bolsheviks wanted to abolish this control in favor of individual, human rights. Coming to power as the result of revolution, and filled with hope about the possibility of building a new world, many jurists, educators, and others dreamed of new possibilities. They questioned hierarchies of many types, not only those within the family. The Red Army was rebuilt under new more democratic rules in terms of the relations between officers and soldiers. Schools were made coeducational, and teachers, students, janitors, and workers created soviets to govern them. Jurists discussed the “withering-away” of law and the state, and crafted laws aimed to encourage this goal. Even hierarchies of art and music were challenged. In the 1920s, Soviet musicians experimented with the “conductor-less orchestra”! It was a time of great leveling and exciting experimentation in every area of life.

One of the conclusions in your book, is that the reversion driven by Stalinist bureaucracy wasn’t only material (considering tough economic situation) but ideological. Which are the main bases for this conclusion?

Many of the Bolshevik attempts to create more freedom for women were challenged by the poverty and ruin created by years of war and Civil War. The 1920s were a period of high unemployment, especially for women. The idea of women’s independence from men could not be realized simply by making divorce easier because women had no way of supporting themselves and their children. Many women also had to support elderly parents and disabled family members. Yet the state’s attitude toward women’s liberation changed at precisely the point that industrialization began, and the Soviet Union became a full employment society. Huge numbers of women entered the labor force in the 1930s, many in good paying industrial jobs. It was precisely at this point that the vision for women’s liberation could have been realized. Although the Soviet state did strongly encourage women’s education, skilling, and employment, and it created a massive system of day care institutions and workers’ dining halls, it also reverted ideologically to traditional gender roles in the home. Women, in addition to working, now also were strongly encouraged to assume complete responsibility for creating a cozy domestic space. The state criminalized abortion in 1936 and made divorce far more difficult to get. In this sense, the Stalinist state adopted a hybrid of women’s labor force participation coupled with traditional family gender roles. The criminalization of abortion placed a terrible and dangerous burden on women, who continued to get abortions but to do so illegally. The hospitals were filled with women with hemorrhages and horrible infections. The abortion rate briefly declined in 1937, but then rapidly began to climb again. Women have always tried to control their fertility (this is essential to their ability to live freely and make choices about their own lives.) The lesson was that women, deprived of the right to legal and safe abortion, continued to abort, but resorted to dangerous methods.

To finish, we would like to know your thoughts on women’s participation in recent demonstrations around the world.

Marx, Engels, August Bebel, Clara Zetkin, Lenin, Aleksandra Kollontai, and many other socialist thinkers believed that waged labor created the preconditions for women’s emancipation. An independent wage would liberate women from the family as an economic unit and provide the basis for their economic independence, which in turn, would allow them to choose freely. I believe that these thinkers were essentially correct. Today, many battles still need to be fought even in industrializing and post-industrial countries. In many countries, women work but they do not have access to a living wage. Ideas about women’s roles in the family, women as sexual objects, and lack of respect for women as people still need to be changed. However, women are active everywhere in new and exciting ways. They are demanding punishment for rapists in India and education for girls in Afghanistan. In Saudi Arabia, they demand the right to drive on the streets. In Latin America, too, there are new struggles and new demands. My daughter and son have come of age in a new era. They believe that young people, regardless of gender, have equal rights and opportunities. They support the right of people to choose their own sexual orientation and to marry who they please. They will of course face many of the same problems that their mothers faced: how to combine work and family, how to create a loving home for children in which men do an equal share of the childcare and household labor. We fought these battles, but I think that the younger generation will do better. Our girls everywhere will demand more. And they must if things are to change.