Discrimination towards women has always had a significant place in AKP’s brand of political Islam, yet young female workers are coming to the forefront of class struggle – as is the case with the picket line outside the Avon warehouse in Gebze. 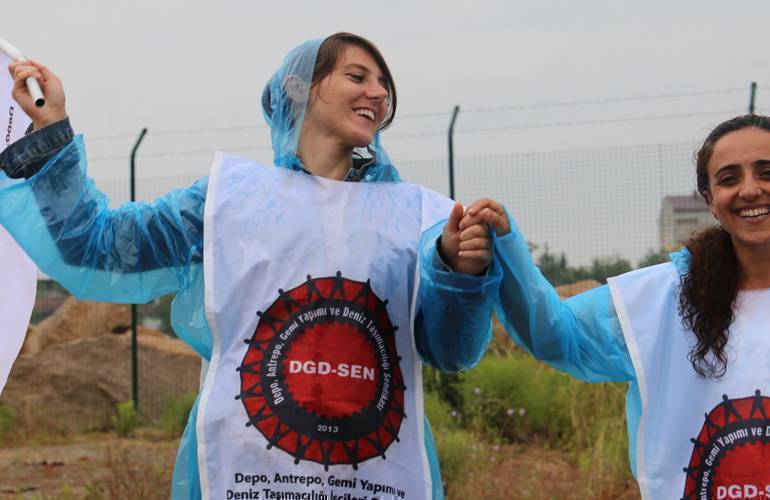 Our first printed issue, A New Generation Rises Up is out! Order online here . For shipping outside the US, please write us at [email protected]

Gebze is among the country’s main industrial districts, lying 50 km to the east of Istanbul. Its Organized Industrial Zone is home to huge international investments subsidized by the government. Among these companies is U.S. cosmetics giant Avon. As in other workplaces across the region, the workers of Avon are subjected to harsh working conditions. When some decided to join the independent, grassroots trade union, Depo, Antrepo, Gemi Yapımı ve Deniz Taşımacılığı İşçileri Sendikası (DGD-SEN – Warehouse, Ship Building and Maritime Transport Workers’ Union), eight of them were fired on May 19. Four days later, they began to picket outside the warehouse.

Unionization is the sole reason for their dismissal. None of the fired workers received any warning for “unethical behavior.” Indeed, some had been previously rewarded by the company for their diligent work. They were fired simply for rejecting the conditions imposed by the outsourcing system: lack of job security, low pay, excessive overtime, health problems. The German company Klüh, which entered as subcontractor in December 2015, made things worse at Avon, obliging all subcontracted workers – newly recruited or senior – to pass a two-month trial period. It also gained the right to transfer the workers to any other facility it served. This was the final blow that drove the workers to organize.

The workers are keeping their vigil under the scorching sun, yet morale is high thanks to numerous visitors from other striking workers’ and women’s groups. Banners read, “Our beauty comes from strength, and our strength from resistance,” and, “Wipe off your lipstick, raise your voice.”

The workers have criticized the cosmetic giant for claiming to empower women: “Avon’s independent sales representatives, who are supposedly ’empowering’ women, are actually integrated into a system that places the whole risk of distribution on their shoulders.” The company’s workers, on the other hand, are subjected to “excessive overtime work, heavy and unhealthy working conditions, occupational illnesses in the joints of the back, neck and wrists, mobbing, harassment…” Many are paid the minimum wage despite having worked as long as ten years with the company .

One of the workers was quoted saying,”I’d won two staff awards, and been elected best ‘team member’ because I was good at communicating with people. I didn’t enjoy working in the factory, because it was tiring work and the breaks were so short. You never knew when you were going to get home, because so often they made us work overtime.” She also reports that while Klüh employees (who number around 160) are paid the minimum wage (around $450/month), the 58 workers employed directly by Avon take home $860.

Avon does not want “strong” women anywhere in the world: At the Calamba Industrial Zone in the Philippines, halfway around the globe, Avon employs 120 workers directly, while 350 workers are employed by subcontractors. The latter perform the same tasks, but for the minimum wage of $146. When they unionized, 16 union representatives who denounced these illicit working conditions were fired a few days before Christmas 2015 .

In fact, Avon sees the women of peripheral capitalist countries as nothing but an endless pool of cheap labor. In this sense, the “socially conscious” cosmetics company from the “civilized” West is in perfect harmony with authoritarian, neoliberal Islamists: Recep T. Erdogan, Turkish president and leader of AKP, has repeatedly urged women to have at least three children, and recently went on to suggest that “Family planning and contraception are not for Muslim families.”

Avon workers fiercely reject the straitjacket imposed upon them by capital, state and patriarchy. Their vigil has been going strong for over 20 days. On June 10, they went to the company’s head office to air their demands, where they were harassed by male officials telling them to “cut the bullshit and go find yourselves husbands.” The workers responded with an impromptu sit-in in front of the head office.

The workers are also organizing a social media campaign around Avon’s own hashtag #BeautyForAPurpose and ‬have started an online petition in English.

Turkey’s labor organizers must turn to this new generation of young workers under precarious working conditions if they ever hope to present a challenge to the AKP government, which has grown its hegemony over the state apparatus and population to unimaginable levels during the last twelve months of its 14 years in power.

Barış Yıldırım is an activist in Istanbul.