Solidarity for fired railway union activist Éric Bezou is coming in from many political and social personalities in France and internationally. In the midst of the pandemic, France’s Ministry of Labor is enabling his unfair dismissal. 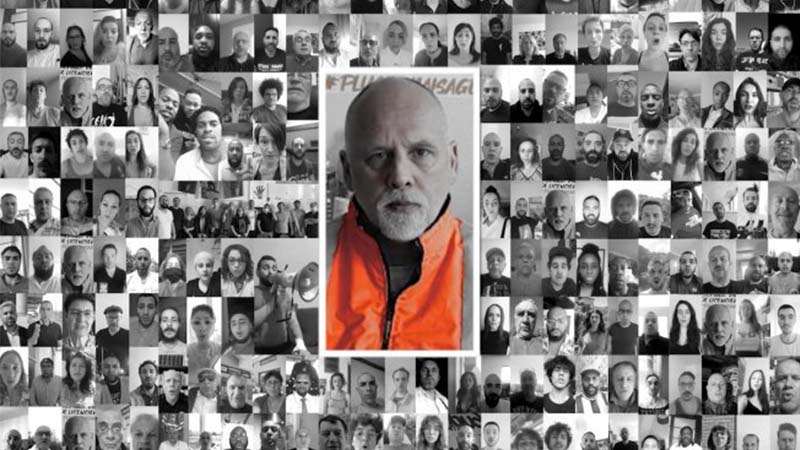 Éric Bezou has been working in the railway industry for nearly 30 years, and he has a more than 20-year track record as a fighter. A year ago, in a meeting with bosses, he literally knelt on the floor before them, demonstrating his understanding that the company wants workers who are docile and willing to subject themselves to constant humiliation. This earned him the persecution of SNCF management, which has been trying to throw him out ever since.1

Now the French Ministry of Labor has taken a further step to allow the company to fire him. The ministry seems determined to annul the decision of the Labor Inspection agency,2 which had previously prevented the SNCF from dismissing Éric.

The ministry’s decision is scandalous, especially in the midst of an unprecedented health and social crisis during which railway workers — including Éric himself — have been on the front lines, ensuring the continuity of public services.

Éric has already received a great deal of support from other railway workers and from social and political activists in general. This has made it possible to publicize this employer repression widely and strongly denounce it. A petition launched by the Sud Rail Saint Lazare union, of which Éric is a member, has already collected more than 6,500 signatures demanding that his firing be stopped.

A video published in Éric’s Twitter feed was viewed more than 50,000 times in just a few days. Among others, it features political figures from the Left such as Olivier Besancenot and Philippe Poutou of the New Anticapitalist Party (NPA); Eric Coquerel, a member of parliament for La France Insoumise (LFI), an organization led by Jean-Luc Mélenchon; Anasse Kazib of the SUD rail union and one of the main figures in the recent strikes against the pension reform; Gäel Quirante, a postal worker and activist with Sud Poste and the NPA; Nathalie Arthaud from Lutte Ouvrière; Raquel Garrido from LFI, Julie Garnier, national spokesperson for LFI; Jean-Pierre Mercier, leader of the CGT Peugeot trade union; Assa Traoré, an antiracist fighter for the Adama Committee; the well-known doctor Jerome Marty; and Antoine Boudinet from the Yellow Vests.

(Translation: Thank you to everyone involved in this campaign of support. If this can bring us together and put a halt to this authoritarian and repressive surge, then it will not have been in vain. Thank you for spreading #NonAuLicenciementDeEricBezou)

After the video was released, many demonstrations of solidarity and support began to come in. For instance, the intellectual, philosopher, and economist Fréderic Lordon made his own video in which he strongly denounced the government and Éric’s firing. Oil workers from the CGT and FO trade unions at the Total group oil refinery in Grandpuits also showed their support for Éric in a very emotional video; they had fought side by side with him in the strike last December against the Macron government’s pension reform.

During the most acute moments of this pandemic, thousands of railroad workers such as Éric have been on the front lines, maintaining essential services. Through their work and through their union activity, workers like Éric have made it possible to ensure the safety of staff and users during this unprecedented period when SNCF management revealed that it could not manage the crisis. Whether by proposing ideas (based on technical and regulatory knowledge that only experience in the field can provide) or by asserting and respecting the rights of withdrawal from work when basic safety conditions were not met,3 these workers helped establish health and safety procedures and conditions that were of tremendous aid in helping save lives and in limiting the spread of the coronavirus. What is the government’s response? To speed up Éric’s firing.

In an interview published in Révolution Permanente, Eric explains that this persecution he is facing is not an isolated case, and is a measure of political and union persecution.

This is, of course, an eminently political move, since the ministry is once again validating the firing of a union activist against the advice of the labor inspectors. This has happened more than 20 times with this government, which to me is scandalous. It is obvious that campaigning against the privatization of public services is a political process, and I have been fighting for more than 20 years against management reforms and successive governments. My case is linked to the breakup of public services, since I fought against the hardships at work brought about by the transformation of the SNCF. And of course, I am also a longtime strike activist, having struck in 2018 against the railway pact and in 2019 against pension reform. But today, after having worked on the front lines during this period of confinement, I am no longer a “hero” but a man to be executed. Nothing surprises us about this government, but it is clear that the time for hypocritical speeches to congratulate the health workers and all the other workers on the front lines is over. The time for repression has come, even before the health crisis is over.

After the government’s disastrous management of the health crisis, they are trying to repress us because they know that we will not let them attack our rights and our working conditions, and that we will be there to denounce every injustice against our coworkers.

The campaign against Éric’s dismissal is growing and now spreading internationally.