As Striketober continues to grow, unions are taking up the fight against the two-tier wage system. To put an end to the divisions between generations of workers and ensure equal pay for equal work, it is essential that unions continue this fight until they win. 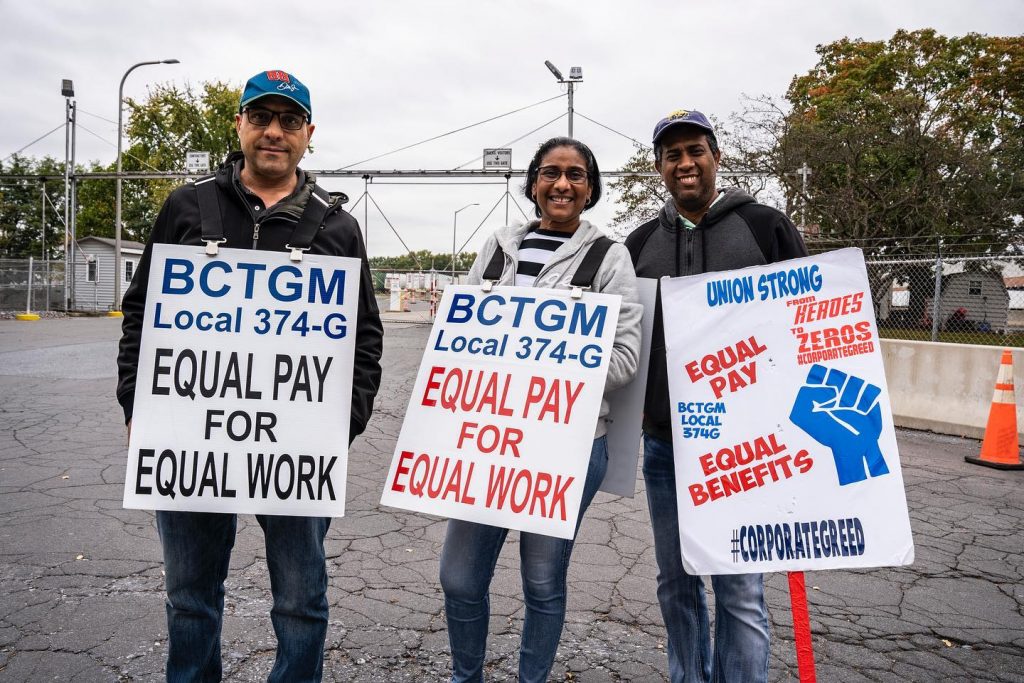 At the picket lines of striking Kellogg’s workers, sign after sign read the same slogan: “equal pay for equal work.” It is a sentiment a number of workers described to us when we asked them what they’re fighting for. They stressed that they’re fighting against a two-tier system that has divided workers since their last contract was implemented six years ago. They spoke of how unfair it is that more recently hired workers doing the same work alongside older workers on the production line make significantly less in wages and benefits. While senior Tier 1 workers get to choose whether or not they do overtime, overtime hours are forced upon Tier 2 workers in chronically understaffed facilities, many of whom are forced to work 16-hour days, seven days a week. At a rally at the Lancaster ticket in Pennsylvania on Saturday, October 9, a worker, Andrew Johnson, described how Kellogg’s hired new workers with the promise of higher pay and the same benefits that Tier 1 workers get. Yet, after joining, they soon saw how empty those promises were, as there were little to no opportunities for Tier 2 workers to advance. Now, faced with new contract negotiations, Kellogg’s workers are emphatically declaring their solidarity with their more junior coworkers and their right to earn equal pay for equal work. It is a fight they all see as their own.

But this isn’t a fight isolated to Kellogg’s. Earlier this week, healthcare workers at Kaiser Permanente facilities in California and Oregon overwhelmingly voted in favor of a strike authorization after months of negotiations for a new contract. Workers, organized in the Alliance of Health Care Unions, authorized the strike in the face of Kaiser’s attempts to impose a two-tier wage system in the new agreement. According to this agreement, beginning in 2023, new hires will make almost 26% to 39% less than older workers. Kaiser Permanente has pushed for this two-tier system with the usual excuse of a fall in profitability and business not doing well. But these claims are patently false. The healthcare giant, even in the middle of the pandemic, has reported billions in profit.

That workers today are taking up the fight to smash the two-tier system is a remarkable development. For years, the two-tier system has been used by companies to weaken organized labor. Newer workers, left without the same protections that higher tier workers receive, essentially become a “second-class” on the shop floor. Although it is being waged as part of contract negotiations, the fight against the two-tier system is a huge show of solidarity by senior workers with better working conditions. It is a fight against divisions in the ranks of the working class and one that requires close attention.

What Is the Two-tier System?

For decades, workers bargaining for contracts have been faced with a wave of attacks on their rights and hard won benefits. This was especially stark in contracts after the Great Recession, where workers were forced to pay for the capitalist crisis. Following the crash of 2008, the Obama administration spent over $1 trillion bailing out big banks and corporations while millions lost their homes. In workplaces, the capitalists pushed for concessionary contracts under threat of layoffs and plant closures. Companies were able to preserve their profitability at the expense of the very workers who kept them running and on whose backs they made those profits.

Central to this was the two-tier system which is one of the most important concessions extracted from unions and has had structural implications for the labor movement. The tiered work system divides workers into separate wage and benefit tiers depending on when they are hired. So although all workers are union members, they make significantly different benefits and pay.

Lower tiers usually comprise workers who are either to be hired after contract negotiations and consequently have no say at the bargaining table, or workers who were hired more recently and thus form a minority in the bargaining unit. This means they are not equally represented in contract negotiations. Contract negotiations are, thus, disproportionately skewed towards the interests of veteran workers and protecting their gains while providing less guarantees for newer workers and those who are incoming. Two-tier contracts come with the promise that conditions won’t get worse for older workers — but the flip side is that these contracts come with adjustments for workers who come later.

These concessions, furthermore, were pushed on workers with the help of the union bureaucracy. Instead of fighting back with the full strength of the working class against layoffs, outsourcing, and shut downs, the union bureaucracy capitulated to pressures from the bosses and acted as their agents among workers to sell these concessions. They worked hard to convince many workers that it was necessary to increase profitability in order to save jobs.

One of the most significant examples of such a sellout in recent years is the fight for the latest UPS contract in 2018. The union leadership, led by Jim Hoffa Jr., not only overruled a strike authorization vote, but also overruled a membership vote that voted down a contract which sought to impose a two-tier wage system. In order to ratify the contract, they used bureaucratic loopholes to maneuver around the lack of support from rank-and-file workers.

In 2019, furthermore, during one of the largest auto strikes in the United States, 50,000 workers at General Motors went on strike for a new contract. Central to their demands was the fight against the two-tier wage system which divided workers. Workers took to the pickets with years of pent up rage: in 2009, the Obama administration bailed out auto companies like GM who nevertheless forced workers to take drastic cuts. After years of working for lower wages, the workers were prepared to strike for what they deserve. They stayed out on the picket lines for a month. Yet the final contract they voted for was filled with concessions to the bosses. The new contract not only capitulated to GM’s promise to close two plants, but also maintained the tier structure and allowed GM to hire more temps, creating yet another tier of precarious workers. In order to sell their tentative agreement, the union bureaucracy worked overtime to paint the concessions as a win. They used a combination of disinformation and scare tactics to sell the contract. At a facility in Tennessee, leaders even called the cops on workers who were organizing for a no vote.

Under the guise of protecting union jobs, the union bureaucracy has led the charge to weaken the labor movement, maintaining its alliance with capitalists and the state and ensuring that workers only win a small fraction of what they can win.

As the ones who make everything of value, workers don’t simply deserve a piece of the pie — they deserve the whole pie.

The last year and a half has led to a dramatic shift in the subjectivity of workers, who now see that they are the ones who run everything. Through the pandemic, while workers were forced to report to work every day and work overtime in unsafe conditions, the bosses could stay and work from home and give themselves millions in bonuses for doing nothing. Workers see that they are the ones who are essential, not the bosses.

The fight for a new contract at Kellogg’s is an instructive one. Workers, while fighting for better wages, are also fighting against plant closures and the offshoring of jobs. The fight against the two-tier system combined with the fight against factory closures is an inspiring example that shows that workers don’t have to choose between demands. As workers at the picket line told us, companies like Kellogg’s will continue to make millions in profits even if they grant all the demands workers are fighting for.

Against capitalist greed and to demand what they rightfully deserve, tens of thousands of workers are currently on strike across the United States, and many more are likely to join them in the next few weeks. That workers are not only fighting for their gains, but for younger workers and the generations to come, is an immense show of solidarity and points to a key lesson for the fights ahead: when workers fight together, they can win.