Workers at video gaming company Activision Blizzard entered a five-day work stoppage and are making moves to unionize. This worker action could have powerful effects for the industry. 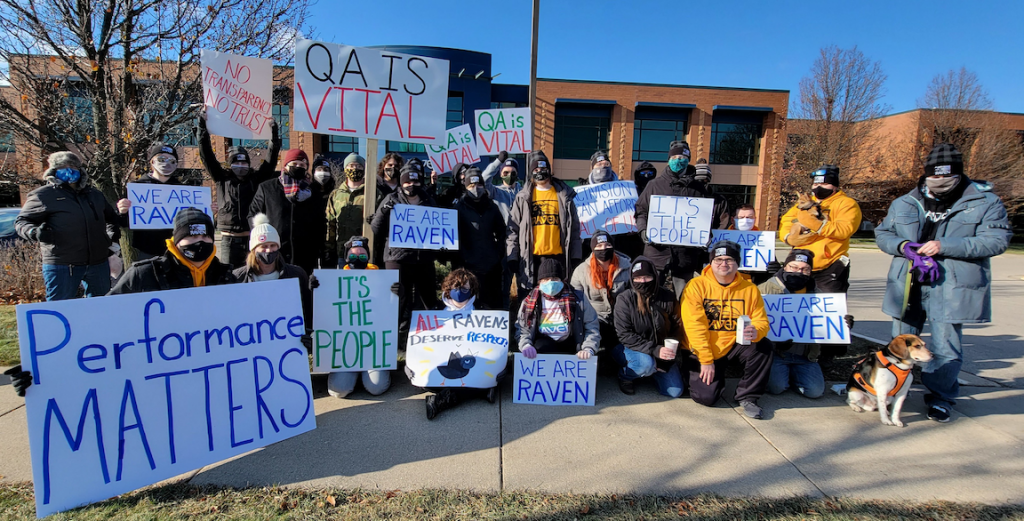 On Friday, workers at video gaming company Activision Blizzard entered their fifth day of a work stoppage in response to layoffs at one of the company’s subsidiaries. The stoppage comes on the heels of revelations of sexual harassment and descrimination at Activision Blizzard and amid fierce resistance to staff unionization efforts.

The work stoppage began on Monday when quality assurance (QA) workers at Raven Software, one of the main developers behind the hit Call of Duty video game series, began being laid off. Employees are demanding that these contractors be reinstated and given full-time contracts. The exact number of workers participating in the work stoppage is unclear, but hundreds of both remote and in-person employees across studios and states participated, with many walkouts occurring virtually.

Activision Blizzard is one of the world’s largest gaming companies, with a market capitalization over $45 billion. In 2020 alone, the company’s revenues exceeded $8 billion and its CEO, Bobby Kotick, is one of the highest-paid executives in the United States, earning nearly $155 million in 2020. Meanwhile, the QA workers at Raven Software were making $17 an hour. Although business is booming, Activision Blizzard’s bosses are still trying to squeeze every penny of profit from their exploited workers.

Last week’s walkout at Activision Blizzard is the third in 2021, and just the most recent blow to the embattled company. In July, California’s civil rights agency sued the company alleging that sexual harrassment is rife in the workplace amid a “frat boy” culture, claims which are being investigated by the Securities and Exchange Commission. Last summer, thousands of workers signed an open letter denouncing the company’s actions and demanding restitution for the victims and accountability. Kotick knew about the allegations before they came out, including instances of rape, and has repeatedly been accused of harrassment himself. He is facing calls to resign.

Workers at Activision Blizzard are also pushing to unionize with the Communication Workers of America (CWA) and have begun to sign union authorization cards. If 30 percent of workers sign union cards, the National Labor Relations Board could conduct a union vote. Speaking with The Washington Post, one worker said that unionization is “the only option,” and asked, “Do we want to work for a company that has a history of not only sexual abuse and protecting abusers but also sporadic layoffs that may hit us at any time, especially as a contract QA worker? Or do I risk losing my job to try and make a change?”

But the company is pushing back against these unionization efforts. In a letter to employees on Friday, Chief Administrative Officer Brian Bulatao tried to intimidate the workers, writing, “We ask only that you take time to consider the consequences of your signature on the binding legal document presented to you by the CWA … Achieving our workplace culture aspirations will best occur through active, transparent dialogue between leaders and employees that we can act upon quickly.”

A unionization effort at Activision Blizzard could have important effects on the entire U.S. video games industry which, as a whole, is not unionized. This fight should serve as an example to other tech workers and, if successful, would be a landmark for an industry which relies heavily on precarious contract labor. Gaming workers’ labor keeps the industry running and is the source of its staggering revenues. These workers should continue their work stoppages and keep the pressure on the companies to hit the bosses where it hurts: their profits.