Workers’ Control Against the Pandemic

Argentina has a long tradition of workers occupying their factories and producing under workers’ control. In the crisis, workers who once had to sew police uniforms have taken control of their workplace and are now making surgical masks. A U.S. hotel worker currently in Argentina reports. 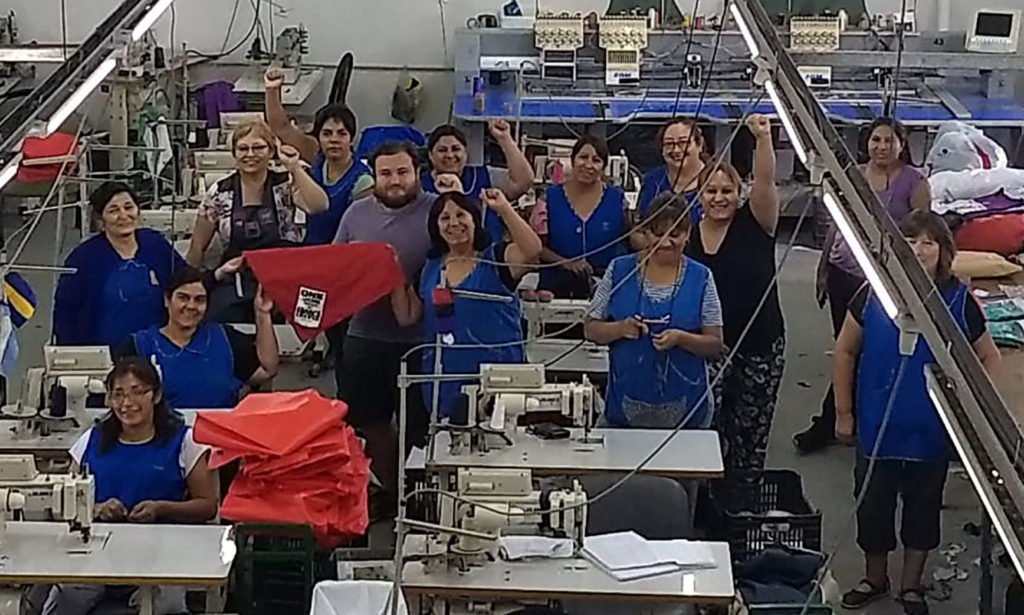 It is becoming clear to people all around the world that the leaders of our society — the presidents and prime ministers, the billionaires and boards of multinationals, the celebrities and talking heads — have few solutions to the twin crises of the coronavirus and the economic slowdown. In most countries the response to pandemic has been too little, too late, and the masses are paying the price.

The incompetence of the ruling class stands in sharp contrast to the heroism and creativity of the workers of the world. With many non-essential workplaces closed or people working from home, social media has been full of praise for the medical, service, sanitation, transit, retail, and other workers who are slugging away under terrible conditions and risk to provide necessary goods and services.

In Argentina, there is a tradition of worker-controlled factories that emerged from the crisis in 2001. In that year, as companies shut down, workers took control of 200 plants and restarted production. In the years following, these initial examples were taken up by workers in various industries fighting against closures and layoffs. But not only did these struggles mean the continued employment of workers who would have otherwise been on the street — they provided proof that bosses could be replaced by workers’ management. Now, many of these factories became integral parts of their communities.

In this time of the coronavirus, these “recuperated” factories are doing their part to stop the pandemic. They offer a peek of what production for need, instead of greed, might look like.

The textile factory Traful in Neuquen was put under workers’ control in 2017 after the owners, the Huerta brothers, removed most of the machines in the dead of night. This was not as easy as it sounds, as the workers were tipped off beforehand and blocked the road going into the factory. They were joined by their fellow workers from the Zanon factory, which has been under workers’ control since 2001. It was only with a police escort after many hours of stand off, that the Huertas was able to transport machines at around 3AM.

The workers inherited a mostly empty shop. Though disappointed, they were not defeated and went to the community. The industrial washing machines that were left were used for laundry. Sewing machines were donated, and when workers armed with signs and banners took to the highways and roads to ask for donations, they were overwhelmed with support.

Now, they are returning the favor with the production of face masks and scrubs. Though practicing social distancing, they are risking infection in order to produce badly needed supplies. In their press statement, they explain that they “are convinced that in the face of this crisis, it is we, the workers, who must intervene with concrete measures in health and economic initiatives to confront the pandemic.” They demand that the government fund a production plan while keeping non-essential workers home and paid. By their statements and actions, they demonstrate that good health should not be held hostage by speculation and profit-motive.

A factory that once supplied police uniforms to the provincial government is now under workers’ control and producing the supplies needed to stop the coronavirus.

In the U.S., healthcare workers at Providence St. Joseph Health in Washington likewise are making masks to protect themselves while they work on the frontlines against the pandemic.

Worker-controlled laboratories and food processing plants are producing badly needed sanitizer, such as at FarmaCoop in Buenos Aires province and La Terre in Mendoza province.

Even in workplaces not yet “recuperated,” the workers are producing vital supplies. The workers of the state-owned shipyards Astillero Río Santiago, who have long been under revolutionary socialist leadership, announced that they will use their laboratories to produce sanitizer.

In the city of Rosario, the teachers at San Jose Technical School have utilized the many laboratories to produce over 40 kilograms of sanitizer. Unfortunately, provincial authorities are making it difficult to distribute the sanitizer.

Technical schools in Mendoza are following the examples of San Jose. In Jujuy, teachers and students at the Institute of Higher Education No. 11 are producing the much-needed face masks while the response of the authorities has been purely punitive with no plan for health and welfare.

Capitalism has produced the means to make so many things easily and efficiently. And yet, the system is finding difficulty in the simple things such as putting face masks in the hands of healthcare workers and sanitizer in the hands of people trying to stop a pandemic.