Workers in France Take Over McDonald’s to Distribute Food

Workers at a McDonald’s in Saint-Barthélemy, France took the restaurant under their own control so they could distribute boxes of food to people in the neighborhoods of north Marseille who have been living in increasing misery since the beginning of the Covid-19 confinement. The management of McDonald’s in France opposes the action, while at the same time they want to reopen restaurants everywhere with no regard for employee health. 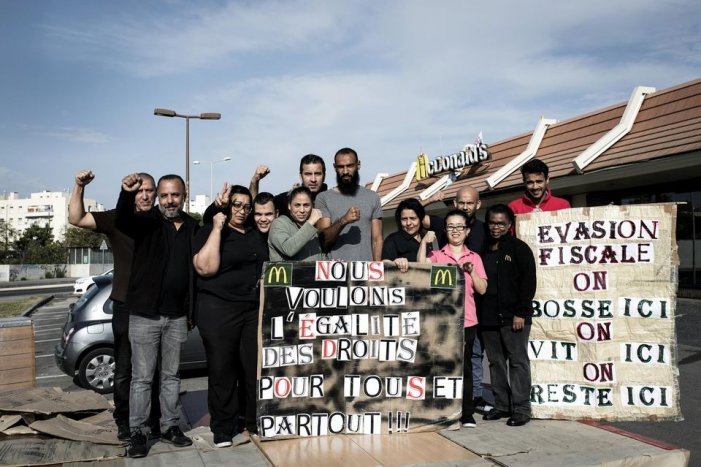 McDonald's workers outside their neighborhood workplace. The sign on the left reads, "We want equal rights for everyone, everywhere." On the right, calling McDonald's a tax cheat, it says "WE live here. WE work here. WE are staying here." Photo by Libération.

Since the beginning of the health crisis, people in the already extremely precarious northern neighborhoods of Marseille have been plunged into poverty. The unemployment rate in these neighborhoods are 25 percent, compared to the national average of 8.5 percent, and 39 percent of the population lives below the official poverty line.

Confinement, with its layoffs and with wages for those working in the informal sector grinding to a halt, has only worsened this precarious situation. Today, an increasing number of people in these neighborhoods are unable to meet even their most basic needs, such as food. As Nair Abdallah from the Maison Blanche neighborhood association put it, “Families are starting to tell us that they no longer have anything to eat. One mother said she and her children had nothing but onion soup to eat for more than three days.”

Many collectives have begun to distribute boxes of food to the most impoverished. Each day, more and more people are asking for help. Government Social Services have even begun to refer people to these collectives.

To help meet the surge in demand, workers at the McDonald’s in Saint-Barthélemy, supported by a number of collectives and associations including the Syndicat des quartiers populaires de Marseille (Union of the Popular Quarters of Marseille), decided to take over the restaurant so it could be used to help in addressing the crisis. Shopkeepers, residents, and the food bank send food, which is stored in the restaurant’s walk-in cooler. The restaurant is also being  used to prepare and distribute boxes to associations and collectives, which are then brought to apartment building lobbies or left on front doors. All this is done with full personal protective equipment, including masks and gloves. There are also hand washing, coughing and sneezing protocols. For Kamel Guémari,  union member in the caucus Force Ouvrière (Worker’s Strength) said, “In this state of emergency, if we don’t take action for our neighborhoods, who will?”

McDonald’s management opposes this action and has condemned it. As Ralph Blindauer, lawyer for the Saint-Barthélemy restaurant workers, told La Marseillaise newspaper, “We would have preferred to do this with an agreement from McDonald’s France, but they said no, citing liability.” And he added, “They are devoid of the slightest bit of humanity, so the workers just decided to ignore them.”

McDonald’s France has positioned itself as an obstacle to addressing the crisis. The Saint-Barthélemy workers realized they could only count on themselves to help support the Marseille community.

Indeed, McDonald’s as a brand is hardly known for its compassion. Just a week ago, the multinational announced that it wanted to reopen its restaurants for drive-through ordering and home delivery — to the detriment of employee health. And even if resuming work is voluntary, Dramé, a union member at SUD Hôtellerie-Restauration (Hotel and Restaurant Union) in Paris, claimed that “employees who refuse to go back to work will be tagged as enemies of management, and risk reprisals.” The company is known for retaliating against “undesirable” employees. Last year, the Marsactu newspaper reported that McDonald’s paid 25,000 euros to solicit false testimony so it could fire union activist Kamel Guemari.

As for resuming work for the company’s employees, Dramé explains that “the kitchens are very small, it would be difficult to socially distance. Also, there is the issue of masks. The priority should be to give them to nurses who desperately need them.” Selling hamburgers to line McDonald’s pockets is nonessential. What is essential for responding to the health and economic crisis, though, is taking over restaurants to help the community, as the Saint-Barthélemy workers have done.

At a time when the French state is leading workers into slaughter with its catastrophic management of the crisis, when employers want to reopen businesses and restart nonessential production at the expense of the health of thousands of employees, the workers at McDonald’s in Marseilles have picked up the tools of their work so they can be put to use to help confront the crisis. They are in the best position to reorganize distribution, not to profit the employers but to help relieve the current crisis.

First published on April 9 in French in Révolution Permanente.