Workers in Sri Lanka Strike Against the Government

On Monday and Tuesday, Sri Lankan workers mobilized to confront the aggressive authoritarianism of the country’s president and the government’s new offensive against the working class. 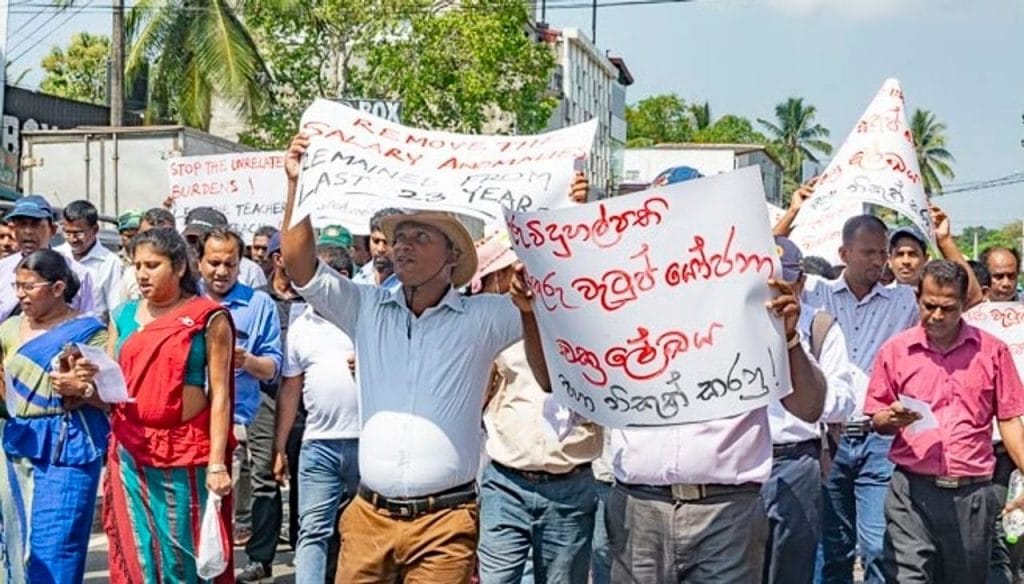 Sri Lanka is facing a serious economic crisis. The country’s masses lack basic commodities, including food. Supermarket shelves are empty, and many basics such as powdered milk and kerosene are nowhere to be found. The government has declared a “state of food emergency” despite continuing to deny that there are any shortages.

A Determined Fight for Higher Wages and Better Working Conditions

This is the backdrop for a recent wave of demonstrations. On Monday and Tuesday, more than 100,000 workers across a wide range of sectors — from health care workers to teachers to railroad workers — took to the streets against President Gotabhaya Rajapaska’s social offensive and for better wages and working conditions. These protests came on the heels of demonstrations last week by electricity, longshore, and oil workers against the privatization of these sectors.

First, about 50,000 community development workers organized a national demonstration for higher wages. The next day, nurses and paramedics were in the streets with the same demand. Teachers then followed suit. After a four-month strike over wages, the latest mobilizations were an opportunity for teachers to challenge the repression that has been unleashed against them and Rapajaska’s increasing authoritarianism, as well as the lack of resources being deployed to fight the Covid-19 pandemic in schools.

Meanwhile, farmers continue to mobilize, demanding the products they need to grow their crops.

Thus, the strikes and demonstrations in Sri Lanka have a particularly broad and diverse character, crossing many parts of both the public and private sectors. Nevertheless, the government — aided by the trade union leaderships — show no intention of giving in.

At the root of these mobilizations is the growing authoritarianism of the Sri Lankan government and its increasingly antisocial attacks. Rajapaska was elected in 2019, defeating an incumbent known for austerity and repressive policies against workers, at a moment of tension after several waves of strikes. He is a military general known for his nationalism and for the accusations of war crimes levied against him during the civil war (1983–2009) with Tamil separatists from the country’s ethnic minority.

Rajapaska immediately consolidated his victory with policies favoring the military, appointing army officers — including other war criminals — to head various administrative departments. He established a series of tyrannical security policies aimed at bringing Sri Lankan workers to heel, and adopted Islamophobic and anti-Tamil rhetoric. With the arrival of Covid-19, Rajapaska took advantage of the health crisis to impose a quarantine and curfew, but implemented no real health measures to fight the pandemic. His government arrested 50,000 people for “curfew violations,” using this crackdown to mask arbitrary jailing of political prisoners.

The lifting of the quarantine took place under army control as part of the state’s ongoing militarization. Soldiers were placed in schools, train stations, and on the streets to reopen businesses.

Now, post-quarantine, protests are back in full swing. Strikes broke out in the garment and oil sectors on the very first day of reopening. Repression became more severe, with numerous reports of abuses and even murders by police. The authorities have justified the crackdown as a way to fight drug trafficking and the pandemic.

The authoritarianism of the Sri Lankan government succeeded in stifling the mobilizations briefly, but the underlying social problems have not disappeared: the rising cost of living, layoffs, and shortages. But the government has made no concessions, unleashing brutal attacks against this week’s protests and using Islamophobic rhetoric and finger-pointing against the Tamils to justify the response. Meanwhile, the trade union leaderships have been betraying the workers in the streets.

It is time for the world to express its full support for the Sri Lankan workers mobilizing for higher wages and better working conditions in the face of this repressive, racist crackdown.

First published in French on November 17 in Révolution Permanente.