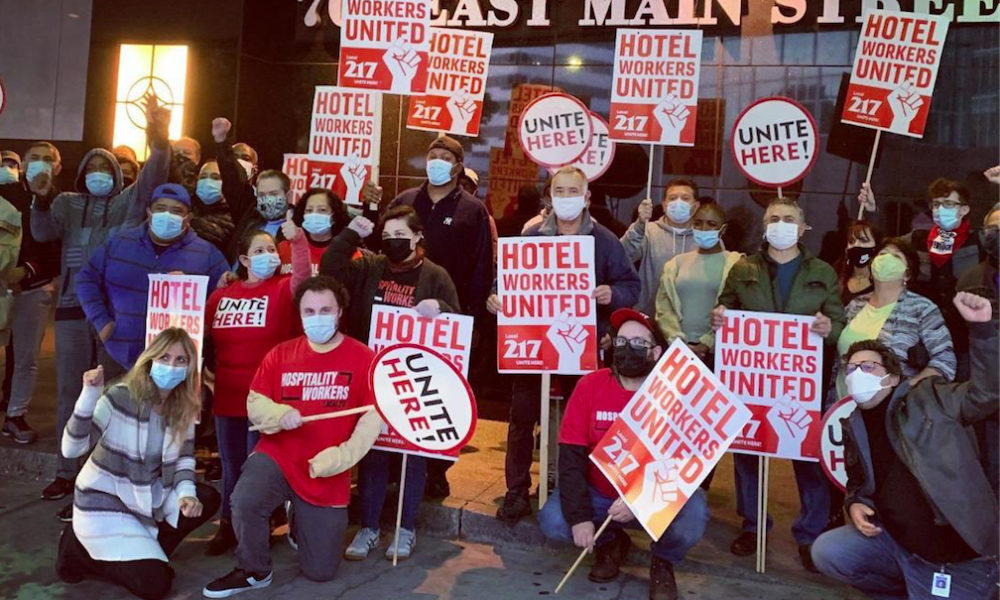 This article was originally published October 29 on Socialist Resurgence.

“No Justice, No Peace!” was chanted by roughly 50 union workers from the Sheraton Stamford Hotel, members of Local 217 Unite Here, community activists, and politicians, while walking a picket line on Wednesday, Oct 28. The workers are demanding that hotel owners be transparent and respect the workers’ years of service following the closing of the hotel.

A year after a vicious round of lay-offs that came in the middle of contract negotiations, Rockbridge Capital LLC, a private equity firm and owner of the Stamford Sheraton, has sold the hotel. It seems they are dodging contractual obligations and have given zero information about the new owners. Rockbridge is also refusing to offer severance or payout accrued sick and vacation days. Through its managing partner Davidson Hotels, another multi-billion dollar hospitality firm, the few workers who remain on the job following the COVID crisis were given short notice that their jobs were terminated.

Workers were devastated to learn the news. Ramona Valdez who works in housekeeping, said, “I’ve had multiple surgeries to cope with two decades of backbreaking work at the Sheraton. One surgery was for the toll of years in housekeeping, and the other was for overworking my body in the laundry. I gave my body and my life to that hotel. Now they give me nothing in return.”

Francisco Sanchez, also working in housekeeping, says, “Even trying to stay safe with a COVID test, I get slammed with bills I can’t pay because I have no insurance. Now my hotel is closing and my job is never coming back. I worked hard for the Sheraton. I deserve better.”

Maruicio Velez, a veteran bartender, said, I’ve been with the company 26 years. I did a lot for them. When they needed someone to come in, I was there. When they needed someone to do inventory, I did it. We stayed until 2 A.M. cleaning the bar. With no complaints! I’m ashamed of this company and what they’re doing to us. It’s not fair. We deserve some type of severance package.”

Workers were angry but have come to expect this foul treatment from a company that spent hundreds of thousands, if not millions of dollars, to try and stop their successful organizing drive in 2018. In general, the fight to unionize Stamford hotels has clearly exposed the brutally aggressive drive for profits by companies like Rockbridge/Davidson (Sheraton), Atrium (Hilton), and the Hyatt.

Following Local 217’s first successful Stamford organizing drive at the Hyatt in 2014, workers led a rank-and-file campaign to organize hotels across the city. But today, they found another roadblock in the form of Covid-19. Hotel companies are now using the Covid crisis to try and turn back the clock on workers who fought hard to raise wages and improved the working conditions for all Stamford hotel workers.

Sheraton workers at the Oct. 28 rally (see video below), Dan Piper, a union teacher and Socialist Resurgence candidate for State Representative in Hartford, Conn., explained how he and his coworkers first came together expressing their solidarity for the Sheraton union drive in 2018.

Piper said, “Other workers can learn from your fight. What the company is doing is criminal. Every union should be out here today. This is not the end. This is the beginning. Companies are going to use this crisis to try and kick union workers to the curb. And this is going to keep happening until workers realize they need to organize as a class.”

Watch a clip from the Oct. 28 rally, including Dan Piper’s remarks.