In a historic work stoppage on Juneteenth, members of the International Longshore and Warehouse Union (ILWU) are leading a day of action that will shut down 29 ports along the West Coast in solidarity with the movement against police terror across the country. 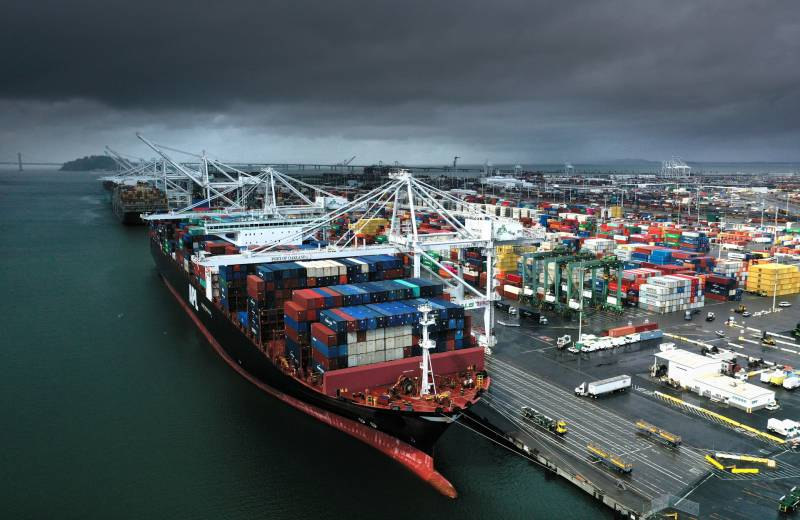 These are the words of Keith Shanklin, the first Black president of the International Longshore and Warehouse Union (ILWU) Local 34 in Oakland and one of the organizers of the ILWU’s largest coordinated work stoppage in over a decade taking place today. On the occasion of Juneteenth, members of the ILWU are shutting down all 29 ports on the West Coast, from San Diego to Seattle, for eight hours. No cargo will come through the docks, no trucks will leave to distribute goods. Over 58,000 workers are expected to participate. As Shanklin’s statement makes clear, this historic event is not only an incredible act of solidarity with the uprising against police terror currently sweeping across the United States, but marks a decisive step in labor’s participation in the movement so far. This is the largest coordinated action by any union in direct support of the Black Lives Matter movement, bringing the fight against institutionalized racism to a new front.

Starting at 8 a.m., dockworkers will lay down their tools and join in a day of action, participating in rallies and marches with other organizations up and down the coast. Though the Juneteenth mobilizations originated with the demand for justice for George Floyd, like the uprising across the country, they have taken up more sweeping demands against racism and state violence. As the union’s press release for the action states:

On June 19, ILWU workers and their local unions up and down the West Coast will take action to reject racism, hate, and intolerance at this unprecedented moment in time amid a global pandemic, domestic unrest made worse by a President who sows the seeds of division for his own personal gain, and systematic racism laid bare by the recent brutal murder of Mr. Floyd.

The action explicitly links the fight against police terror to the systemic racism ingrained in U.S. history and its institutions, racism that has been exposed for all the world to see in the midst of this unprecedented pandemic and economic crisis. In Seattle, workers will join a march with community organizations and MLK Labor — the union that recently voted to kick cops out — and march on the Seattle Department of Corrections in solidarity with “victims of the criminal justice system while incarcerated” who are forced to work for million-dollar companies for miniscule wages and without proper protective equipment. In Oakland, workers will join a city-wide demonstration in a march to City Hall, and Angela Davis and filmmaker Boots Riley will give speeches.

The work stoppage is being spearheaded by Locals 10, 34, 75, and 91 of the ILWU, as well as the union’s Committee Against Police Terror. These locals, many of them Black-led or with a primarily Black membership, have a long history of combative commitment to anti-racism and Black struggle. Before organizing today’s Juneteenth action, these branches led other ILWU locals in a nine-minute work stoppage on June 8 in honor of George Floyd, stopping all work for the amount of time that killer cop Derek Chauvin had his knee pressed against Floyd’s neck.

But this is not the first time the ILWU has organized actions to protest police brutality. In 2010, Oakland dock workers shut down the city’s port after a transit cop shot 22-year old Oscar Grant on a subway platform. The union shut down ports again in 2015 on May Day after the police killed Walter Scott in South Carolina. But today’s work stoppage is on a scale not organized by the union or the wider labor movement in decades. More than that, it is a direct challenge by rank and file workers to large unions’ decisions — including that of the AFL-CIO — to protect cop unions. But ILWU members know that cops uphold the racist laws of the capitalist state, and as a result, are no friends to workers. As former longshoreman and member of the ILWU Jack Heyman told the Nation, “if you look at ILWU locals’ bylaws, many of them explicitly ban police from membership. That’s because the police have always been used as tools in the fight against the working people.”

But the roots of the ILWU’s struggle against the police and racism go even deeper, all the way to the union’s inception. The ILWU was founded during an 83-day long strike of dock workers down the West Coast who were fighting for better working conditions and the ability to form a union. In the middle of the strike, during a confrontation between strikers and company-hired strikebreakers, police shot into a crowd and killed six workers. The outrage sparked the historic  1934 General Strike in San Francisco and eventually led to the formation of the ILWU in 1937. While many other unions actively banned Black workers from joining their ranks, several ILWU locals were made up of Black and white workers, desegregating work gangs and fighting for better working conditions side by side.

The ILWU has retained this militant legacy, linking labor struggles with broader social movements across the world. From refusing to process goods from apartheid South Africa to refusing to unload cargo destined for Mussolini-led Italy in Ethiopia, dockworkers have shown the incredible power that the working class has to stop the necessary operations of capitalism’s profit machines. In more recent history, the ILWU famously staged protests in California to protest the Iraq war and refused to unload a ship from Israel in solidarity with Palestine.

Today’s work stoppage is another chapter in this history, made all the more significant by being held on Juneteenth, the day when enslaved people in Texas were first informed of the end of institionalized slavery, two years after the Emanicpation Proclamation was first put into effect. It is a day symbolic of both the racism embedded in the U.S’s past and present, as well as the heroic history of anti-racist struggle led by Black people and radicals for generations.

In the context of the current uprising — which has exposed the rotten, racist heart of U.S. capitalism — today’s work stoppage has the potential to mark the opening of a crucial phase in this historic moment, one that could link the struggle against violent police terror and systemic racism in the streets to the strategic power of workers in the labor movement. Just this single day of action will cost U.S. companies and the state that defends their profits billions of dollars. Imagine what could happen if dockworkers, transport workers, and other key sectors took up a work stoppage from coast to coast and joined the hundreds of thousands of young people protesting in the streets. Such an alliance would hit this system of exploitation that profits off of the lives of Black people across the world where it hurts the most.

For this movement to continue, more actions like this — a fight against the police and the state, and against the corrupt union bureaucracy that protects police unions — are vitally necessary. As ILWU members Trent Willis and Keith Shanklin wrote to the president of the ILWU: “It is urgent that unions respond to the racist upsurge. In fact, it is a matter of life and death.”