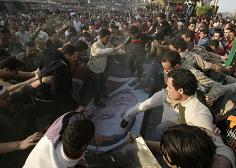 Sunday, April 6, a general strike against the [price] rise in bread,
the increasing cost of living, and in favor of wage raises took place,
called by the textile sector workers, especially the combative Ghazl
al-Mahala factory, and oppositional groups. In several of the
demonstrations, slogans against the reactionary Hosni Mubarak regime
were chanted. According to several international media analysts, the
result of the strike was uneven. In the north of the country the
strike enjoyed more compliance than in the south.

This was owing, not so much to a diminished spirit of struggle, that
the Egyptian workers have maintained for more than a year, but rather
to the terrible repressive measures that the government preventively
deployed to hinder any demonstration of opposition. Militarized
streets, factories occupied by cops, massive arrests of unionists and
oppositionists, and even deaths in the few demonstrations that dared
defy the presence of the forces of order. At press time, the murder by
paramilitary forces of a youth and a nine year old boy who were
participating in a march to repudiate the repressive and
pro-imperialist government of Mubarak, was reported.

The “bread crisis” and an unusual big wave of workers’ struggles

The so-called “bread crisis” has its origin in the spectacular price
increase registered by this basic component of the diet of the
majority of the population. In spite of being subsidized by the state,
the price has increased by 50% so far this year. This has caused
scarcity and long lines in front of bakeries, and even battles among
residents to get themselves a piece of bread, which left dozens of
wounded and deaths in a war of poor people against other poor people.
To this can be added the fact that inflation has made the prices of
other vital consumables sky high and has driven rents up, which has
now become a structural problem, where thousands must live in the
streets, for lack of housing.

This strike is the outcome of more than a year of different
experiments in struggle that Egyptian workers have been carrying out.

Without a doubt, the textile workers of the state-owned Ghazl
al-Mahala factory, located in the north of Cairo, the capital, are the
vanguard of this movement (according to the daily Il Manifesto of
April 8, 2008, this is the biggest workers’ strike of the last 30
years in the Arab world). These workers have been mobilizing since
December 2006. The workers of this plant managed to wrest certain
concessions from the government, including a wage raise. According to
the Egyptian site arabist.net, the Mahala plant has become a symbol
for workers. The same site reports that in the first six months of
2007, 350 strikes took place. Cement factories, railway workers,
subway drivers, and other textile factories followed the path of the
Mahala textile plant. This is no small matter if one takes into
account the fact that the Mubarak regime has governed with a state of
emergency for four years. ETUF, the only trade union center, is
completely subordinate to the government, and for a strike to be
legal, it has to be supported by the majority of the leadership of
this state-controlled center. Nor is it a small matter that women are
the vanguard of this struggle, since the labor force in the textile
industry is fundamentally female. This question, together with unity
between Muslim Arab workers and workers from the Christian minority,
called Copts, has no immediate precedents (see “La ola de luchas
obreras que sacude Egipto” on www.egiptoantiguo.org). In addition,
the big strike wave during the last months of 2007 spread to part of
the private enterprises. It is also noteworthy that professors and
university students from Cairo joined the general strike of Sunday,
April 6, with directly anti-government slogans like “Down with
Mubarak!” and “Mubarak, thief!,” showing a widespread feeling for
struggle for political liberties.