Capitalism craves the certainty of a steady rate of profit, based on assurances that exploitation can chug along from day to day as it always has. The uncertainty of the U.S. presidential election, with no winner declared, is creating much-despised volatility in markets across the globe. 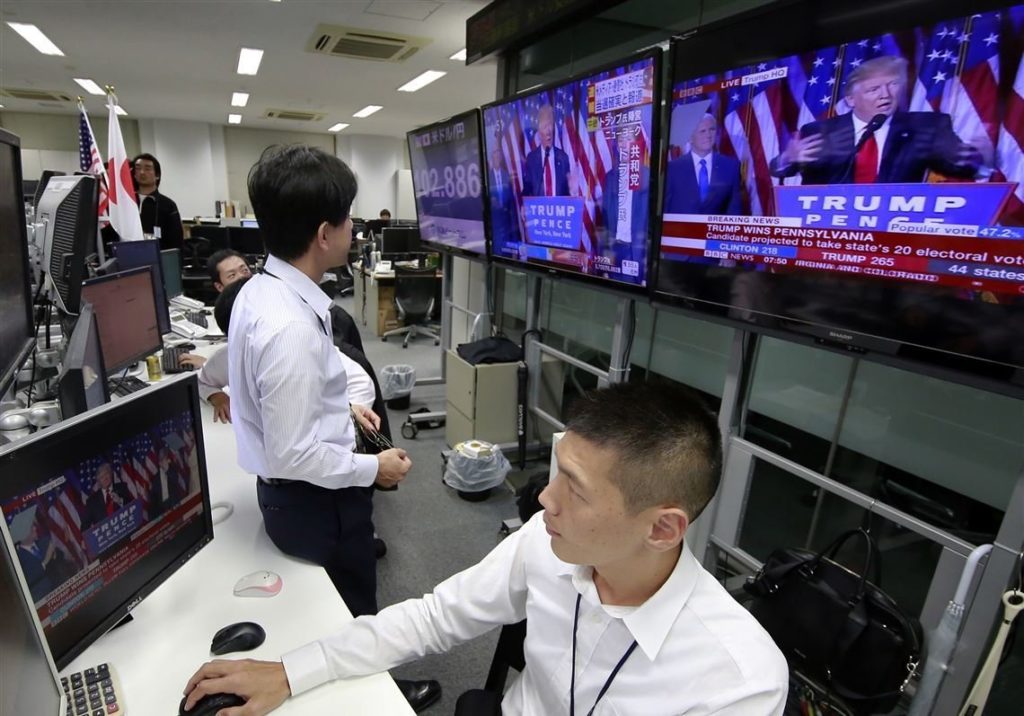 The world’s financial markets are a good indicator of how global capitalism views the U.S. elections. In the absence of a clear winner, the U.S. markets woke up today to what had already rattled overseas markets beginning Tuesday night. As the New York Times reported, those foreign markets “swung wildly as voting results indicated that the outcome of the U.S. presidential election could remain unclear for longer than investors had hoped.”

Wall Street had broken for Democratic candidate Joe Biden in the final weeks and days of the campaign, a signal that finance capital was willing to trade more tax cuts and deregulation for less chaos and volatility and a return to “normal” international relations. The barons of finance also bet that the Democrats would be more likely to enact a big pandemic relief package soon after the first of the year that would boost the sagging economy ahead of the forecast recession.

And yesterday, on Election Day itself, stocks had surged in anticipation of the “blue wave” that would carry Biden to the White House and give Democrats control of both Houses of Congress. But the optimism that induced Tuesday’s market results faded away as the night went on.

“Futures on the S&P 500 Index oscillated between gains and losses as East Coast tallies came in, after the index gained 1.8 percent in regular U.S. trading on Tuesday,” the Times added. “But by about 10:30 p.m. in New York, stock futures were sharply higher. Government bond yields plunged before beginning to bounce back.” That’s the kind of volatility they’ve been yearning to see disappear.

The Nikkei, Shanghai, and Hang Seng markets were fluctuating rather wildly after U.S. polls closed, and ultimately closed with mixed results: the Hang Seng Index in Hong Kong lost 0.2 percent, China’s SSE Composite Index gained that same amount, and Japan’s Nikkei 225 posted a bigger gain of 1.7 percent. But the volatility — which always spells uncertainty —  was unpleasant for the capitalists.

Investors might “be wary that delayed vote counts could lead to a long period of uncertainty,” the Times wrote.

The unclear outcome is what Wall Street least wanted but was bracing for. MarketWatch called it the “worst scenario” and compared it to the volatility of the markets as the 2000 election dragged on: from November 17 through December 15 of that year, the S&P 500 went up and down like a yoyo, ultimately declining by 8.4 percent.

The fear of uncertainty “is reflected in part by elevated volatility measures,” and the Volatility Index — a measure of expected S&P 500 volatility over the coming 30 days, looked bad. “VIX futures contracts show investors don’t expect volatility to subside right away.”

The flip in the Asian markets led to jitters in the European markets that opened shortly after Trump claimed victory, demanded a halt to the counting of votes, and called the election a “fraud on the American people.”

Neil Wilson, chief analyst at Markets.com, put it this way shortly after Trump’s comments. “Donald Trump just declared war by declaring victory in the election before all the counting is over. He’s played the voter fraud card and this has undoubtedly unsettled markets as a long and protracted battle in the courts is precisely what investors do not want.”

Dow futures dropped 442 points within 15 minutes of Trump’s declaration, and some traders predicted an “ ugly tantrum” in the world’s biggest bond market — for U.S. Treasury Bonds.

Craig Erlam, senior market analyst at OANDA Europe, was more blunt, characterizing the night as “arguably the worst possible outcome for both the markets and the prospect of a peaceful outcome.” He added that he feared unrest.

What Does This Mean for Workers?

Why do these market reactions matter to working people? The main reason is not that our pensions and retirement funds suffer from the volatility. As I wrote late last week, “When the stock market falls, the bosses aim to push the losses they suffer onto our backs.” And right now, the context for any losses is the current expanding economic crisis, one that “was already on the horizon before the pandemic began. In fact, the main institutions of global capitalism had already been forecasting a downturn (some even dared suggest a ‘recession’), and earlier this year, the World Trade Organization forecast a decrease of between 13 and 32 percent globally just this year.”

When the capitalists take a hit, they inevitably try to push it onto the backs of the working class.

At this writing, only a few minutes after the U.S. markets opened in New York, it’s too early to tell what things will look like at the end of the trading day. The election results remain unclear, and as the news unfolds with more and more votes counted while trading continues volatility could increase. But shortly after the opening bells, the Nasdaq — with its technology-heavy listings —  jumped 2.6. percent, the Dow Jones Industrial Average was up 233 points, and the S&P 500 had gained 1.54 percent. Uber and Lyft were both watching big surges in their share prices after they bought a victory in California’s Prop 22, which will allow them to continue to classify gig workers as contractors and deny them labor rights.

What appear to be early gains on Wednesday morning “came on the hopes that a clear Biden win would remove the uncertainty of a prolonged disputed election,” reported the Wall Street Journal. The Journal pointed to Biden gains in swing-state votes during overnight counting to explain the rise.

“Maybe the stock market cares more about the presidency and is thinking that if it’s Biden at least we get a resolution,” Priya Misra, head of global rates strategy at TD Securities, told the Journal. She said that if the Republicans retain the Senate it will make it harder to “juice the economy with more stimulus.”

If it looks to Wall Street that it won’t get the aid program it wants for the United States to help shore up its own fortunes, that will be trouble for working people. “It very much looks that whoever wins the White House, we face a divided Congress,” Stéphane Monier, chief investment officer at the private bank Lombard Odier, told the Guardian. “ This has far-reaching implications for markets, mostly because it means that any kind of pandemic recovery package is still tough to approve.”

The markets, in other words, are getting more uncertainty — the thing capitalism hates more than almost anything.