Writing for the Revolution 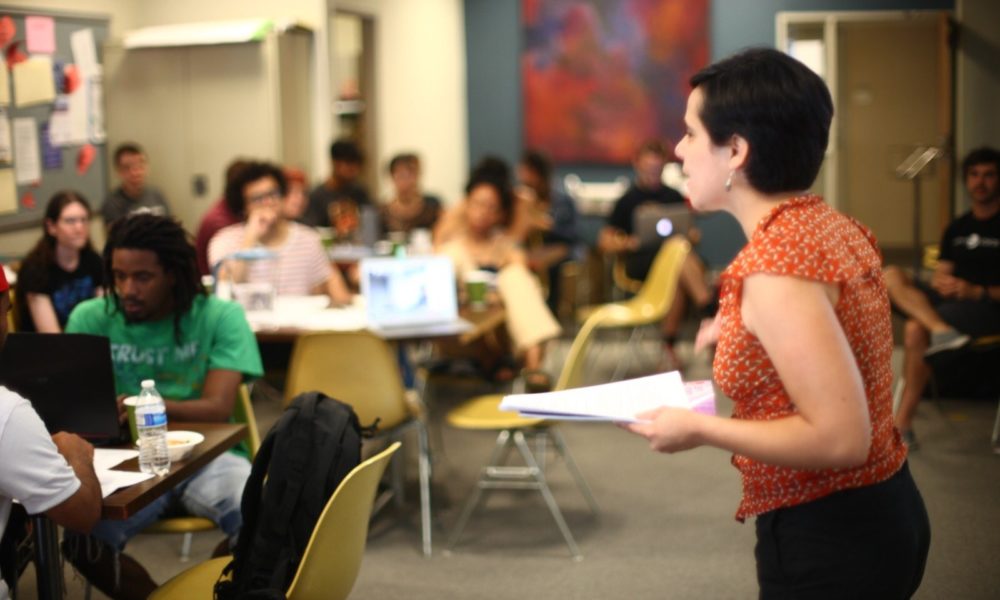 It was a warm summer Sunday, with fewer people in the streets of Manhattan than on any weekday. A few minutes before 11 am, a group of young leftists began to trickle into the CUNY Graduate Center, looking through the labyrinthine hallways for the room where the journalism school would take place.

Members of Left Voice’s editorial board shared the vision and purpose of this publication and led workshops on different topics for those interested in becoming regular contributors. With 35 people in attendance, and a few more connected via video conference, the school kicked off with the first talk, “What is the Role of a Publication in Revolutionary Politics?”. The speakers, Juan Cruz Ferre and Jimena Vergara, drew on past experiences of the revolutionary press such as Iskra and L’Ordine Nuovo to highlight their role as “collective organizers.” These publications set political priorities, opened new relations with workers and intellectuals and worked for to the consolidation of a coherent political force.

Jimena Vergara presented Left Voice’s international network of revolutionary publications, which includes twelve publications in eight different languages: from Brazil, Argentina, Mexico and other countries in Latin America, to Italy, France, Spain and Germany in Europe. She also stressed the importance for today’s reemerging socialist movement of building a publication that puts forward the ideas of class independence, anti-imperialism and revolution.

After this came a workshop by James Hoff providing tools and tips for before composing an article: brainstorming topics, our editorial approach, and article structure. After lunch, Nathaniel Flakin led an imminently practical session, “How to Write an Article in 45 minutes.” That is very little time, but before the last bell rang, many participants had workable drafts.

At the end of the school, Olivia Wood explained how to fine tune an article with a professional yet accessible session about editing. Luigi Morris gave the audience an overview of visual media techniques and their mighty potential in the age of social media.

Left Voice is becoming a household name for the U.S. left. The rebirth of socialism in the U.S. underscores the need for a publication that does not settle for reformist crumbs and instead argues for uncompromising revolutionary politics. If you are interested in collaborating with Left Voice by writing articles, editing, translating, or helping with visual communication and social media, send us an email.