After being called “essential” during the pandemic, another set of workers is being offered an insulting contract by management. In response, they are preparing to strike. They deserve the support of every union in Philadelphia. 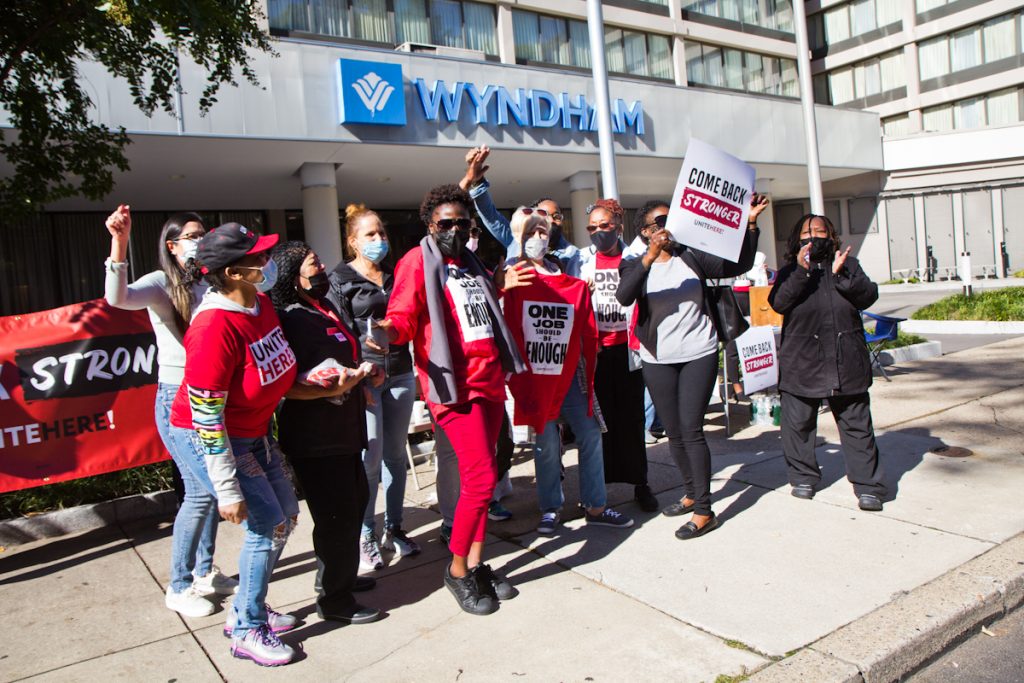 On October 29th, food and hospitality workers at the Wyndham Hotel organized in UNITE HERE Local 274 voted unanimously to authorize a strike.Pickets will start on Nov. 8 and 15, leading to a possible one day strike after that.

The Wyndham workers have been working without a contract for years. Management has been refusing to negotiate a new contract since 2019. More than this, since the pandemic hit, the staff at the Wyndham has been cut almost in half — from about 100 to 57. This has meant ramping up the workload of the remaining workers.

After being called “essential employees” while working in a deadly pandemic — which so far has claimed 750,000 lives in the United States alone and five million globally — management’s offer to the workers is insulting at best. Servers would see a dollar more an hour. Bar tenders would see just a fifteen cent raise — and that would drop to a dime more in two months, increasing in tiny steps afterwards.

The struggle at the Wyndham is far from alone.

Tens of thousands of union workers across the United States are facing a similar battle — and going on strike to fight for what they know they deserve. At the Kellogg’s factory two hours away in Lancaster and at Kellogg’s factories across the country, as well as at several John Deere plants, workers are fighting back after working in a deadly pandemic and then being handed punishing hours and insulting offers from management. And in fact, the UAW union rank and file at John Deere — making up the biggest strike of Striketober — just voted down a second, woefully inadequate contract offer from the bosses.

These strikes reflect something crucial: the leverage that workers have in the current situation.

Workers always occupy the essential place in their workplaces and in the economy as a whole: we’re the ones who flip the burgers, drive the busses, serve the drinks, drive the cabs, and keep the production lines running.

But this leverage has increased in recent months. Workers are in short supply in many sectors, while the bosses are eager to increase profit rates after the pandemic shutdowns.

A strike by the Wyndham workers in this situation, in other words, would mean a strike when they have far more leverage than at any time in their ongoing contract negotiations so far.

What’s more, a strike even by a small workforce like that at Wyndham would place these workers at the forefront of the worker struggle across Philadelphia — precisely because they’re fighting to improve conditions that large sections of Philly workers face too. Striking, and wringing real concessions from the bosses — not just a dime more an hour — would be a win for workers in Philly generally, showing what’s possible and how to fight for it.

All of this suggests that it’s key to connect the brewing hotel strike to other workplaces — solidarity strikes and walkouts by other unions to coincide with and reinforce the potential strike at the Wyndham. That kind of real connection and solidarity would increase the power of the Wyndham strike by giving it muscle to affect the Philly economy more broadly — and with it, the pressure on the bosses to settle. It could empower worker struggles across the city, too — showing what militant action can do. And wider solidarity means bigger pickets that have a better chance of scaring off, or winning over, scabs.

It is important now for the leaders of UNITE HERE in Philly to prepare solidarity actions — and they’re perfectly positioned to do it. The union represents 4,000 workers across the city, from the airport to other hotels. And Philly is a union city, with tens of thousands of union members in the PFT, AFSCME, and beyond. The SEPTA transit union itself is one of the most militant transit unions in the country: it has gone on strike more times than any other such union in the last few decades.

The reality, though, is that it will take rank-and-file fighting from below — from the workers in UNITE HERE and beyond — to push the union in that direction. In recent years, union leaders avoid solidarity strikes like the plague. That’s in part because these types of strikes are illegal, and it’s in part because of the fear of upsetting Democratic Party “allies.”

But the fact that those kinds of actions are illegal and that they terrify politicians — what better proof of their power? The fact is that when a strike is strong enough to win, it doesn’t have to worry about the law: it already has the leverage to make its power felt. And that kind of strike shows that labor law is just a tool to try to keep the working class from fighting back.

In other words, building the strongest pickets and strikes possible will mean the self-organization of workers themselves — real, bottom up union democracy — to decide where, how, and how long to strike, and to reach out beyond union boundaries for the widest strike actions possible.

Readying for a strike, UNITE HERE workers are also preparing to stand at the front lines of the labor movement here in Philly. It’s a struggle that deserves the fullest, and most militant, support of every union in the city.