“Yes 4 Minneapolis”: Reforming an Uprising, but Not the Police

Minneapolis voters now may have a few different police-reform options to consider in the upcoming city elections in November. Despite promises to dismantle the Police Department, the proposals on the table will do nothing to stop police violence. 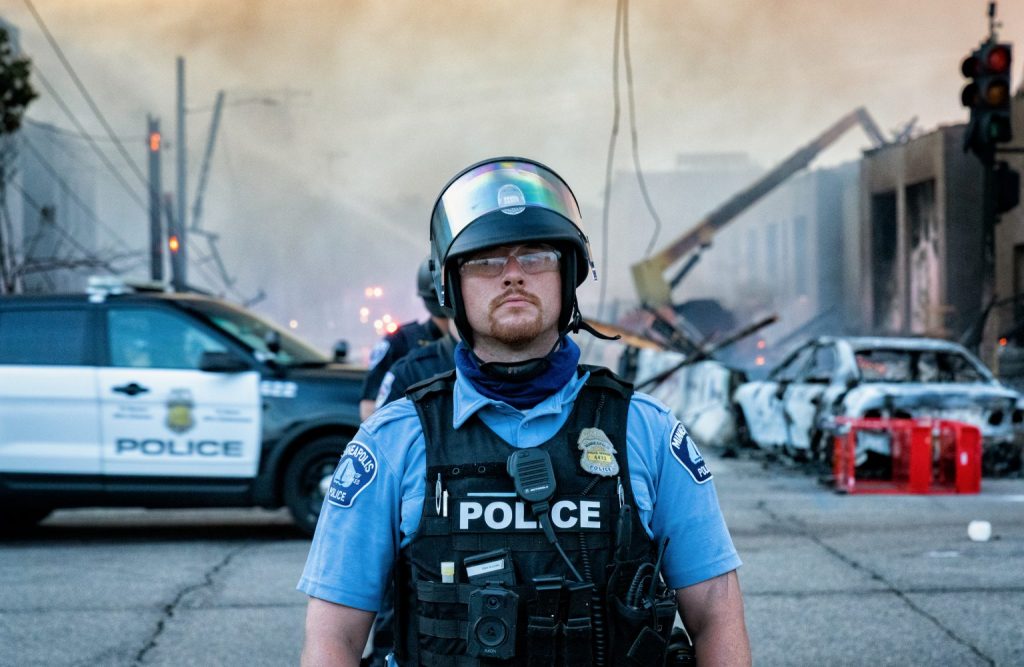 As the Derek Chauvin trial continues, Minneapolis residents witness the militarization of their city. Fearful of another uprising, terrified lawmakers have erected barricades and razor wire fences around the Government Center, City Hall, and police stations. The fortification is estimated to cost $645,000. Additionally, law enforcement has been using surveillance planes to look for signs of unrest. After backlash from community members, Minneapolis officials dropped their plan to hire social media influencers to share state-sanctioned messaging about the Chauvin trial.

On March 12, 2021 — as the jury selection was underway — the City of Minneapolis agreed to pay $27 million to George Floyd’s family to settle a wrongful death lawsuit, raising concerns from Judge Cahill and Chauvin’s defense attorney that the jury might be swayed against Chauvin.

Immediately after Floyd’s murder, the Minneapolis City Council publicly vowed to dismantle the Police Department, a pledge from which it later backed out.

Minneapolis voters now may have a few different police-reform options to consider in the upcoming city elections in November.

The City Council and Yes 4 Minneapolis (a coalition of advocacy groups) are each proposing separate but very similar plans to establish a Department of Public Safety, which would replace the Police Department. Meanwhile, Twin Cities Coalition for Justice 4 Jamar (TCC4J — an anti-police-brutality community group formed after the police killing of Jamar Clark) is proposing a Civilian Police Accountability Council, which will have oversight over the Police Department.

The three proposals have slightly different paths to the November ballot. Under the city charter, there are three ways to get an amendment on the ballot: through the Charter Commission (an unelected body of 15 members appointed by the Chief District Court Judge), through the City Council, or through a citizen petition. The City Council proposal would have to go through the Charter Commission and then the mayor before being submitted to voters. Both the Yes 4 Minneapolis and CPAC proposals would require 5 percent of registered voters to physically sign a petition by May 1. These options would go before the City Council and then the mayor before getting on the ballot. Organizers for CPAC, however, do not think they will meet the deadline and are exploring the possibility of qualifying for a special election.

All three proposals will eventually have to be either accepted or vetoed by the mayor before being put on the ballot. The mayor’s decision, however, can be overruled by a vote of nine out of 13 City Council members.

The most radical of the three options is to establish community control of the Police Department. Proposed by TCC4J, this option would elect a 13-member Civilian Police Accountability Commission (CPAC), which would control the police. It would have the power to hire the chief of police and take disciplinary actions in cases of police misconduct. It would also be able to determine the police budget.

Community control of the police is not a new idea. It was first proposed in the 1970s by the Black Panther Party as a response to police violence toward Black people. It is rooted in the principle of giving power over police to the community members most affected by police violence. Proponents of CPAC claim that under civilian control, it would be ultimately up to them (the community) to determine the police budget and to dismantle the police.

Yes 4 Minneapolis is proposed by a new group that goes by the same name. Little information is available as to what exactly the proposal hopes to accomplish besides changing the name of the proposed new entity. Both the City and Yes 4 Minneapolis have responded to requests for the full amendment legal language by directing people to the Yes 4 Minneapolis website, which does not say much.

Philanthropy Will Not Dismantle the Police

Yes 4 Minneapolis calls its petition “The People’s Petition,” but based on its philanthropic roots and lack of transparency, it seems anything but.

Not much is known about the origins of Yes 4 Minneapolis. At the bottom of its website, it says in small print, “Made in [solidarity fist sign] with Color of Change.” Color of Change has a history of running counter-campaigns and using email blasts and social media to gauge and tweak their messaging. It is a powerful racial justice nonprofit founded by Van Jones and James Rucker. In 2016, it also received a five-year $9.25 million grant from the Ford Foundation, which has a history of cooperating with the CIA to suppress radical movements1Frances Stonor Saunders, Who Paid the Piper: The CIA and the Cultural Cold War (London: Granta, 2000), 134–35, 139.. Color of Change also received grants from Open Philanthropy Project and Open Society Foundation.

Recently, Yes 4 Minneapolis reported a single donation of $500,000 from George Soros’s Open Society Policy Center. This is more than twice the amount of money Mayor Jacob Frey (an opponent of replacing police with a Department of Public Safety) has on hand for his reelection campaign.

Curiously, despite the vagueness, Yes 4 Minneapolis has garnered support from prominent groups such as Reclaim the Block, ACLU MN, Minneapolis Federation of Teachers and Educational Support Professionals (MFT 59), and Twin Cities DSA. Many people from these organizations have been at the forefront of social justice and abolition work. To understand how a multiracial uprising turned into a philanthropic petition, we need only look at Ronald Duchin’s tested formula to divide and conquer movements: isolate the radicals, cultivate the idealists, educate them into being realists, and then finally co-opt the realists.

In the book The Revolution Will Not Be Funded,2INCITE!, The Revolution Will Not Be Funded: Beyond the Non-Profit Industrial Complex (Durham: Duke University Press, 2017), 79–87, 85. Tiffany Lethabo King and Ewuare Osayande discuss philanthropy’s use of people of color to its advantage in maintaining the status quo. The Grassroots Institute for Fundraising Training (GIFT) model teaches that most funds come from individual donors rather than foundations, which have limited funds. While advising activists to raise money from their communities, the GIFT model also encourages activists to develop relationships with wealthy individuals. As a result, these activists become beholden to the interests of the donor class.

Grant money from the ruling class will not dismantle or even substantively reform the racist institution of police. Rather, it is a recipe to keep things as they are. A year into the pandemic, as the rich have gotten richer and the poor have gotten poorer, the ruling class is afraid of any semblance of police defunding or dismantling taking place in Minneapolis — the birthplace of the George Floyd uprising — and spreading like a pandemic across the globe.

The movement for defunding or abolishing police seems to have fallen victim to elite capture, the ruling-class influence on well-intentioned activists through propaganda and public-private partnerships.

An often-overlooked function of public-private partnerships is their policing work. A recent example of this is the emergence of groups like Minnesota Safe Streets. Safe Streets is a coalition of nonprofits that are partnering with the YMCA to provide “boots on the ground” (including, during the Chauvin trial, “creation of Critical Incident Response Teams for rapid deployment following the eruption of violence in the metro area”) and coordination with law enforcement.

Safe Streets is only one example of how the state delegates policing to other institutions. A more sinister and well-funded example is the Target Corporation. With its  state-of-the-art forensics labs in Minneapolis and Las Vegas, Target has collaborated with law enforcement to surveil and incarcerate young Black people. Using facial recognition technology and collaborating with other stores and across state lines, Target also lets shoplifters steal from them until there is cumulative evidence to charge someone with a felony shoplifting crime. Notably, Jim Rowader, the Minneapolis City Attorney, also happens to be a former Target executive.

No Peaceful Way to Police

Police, whether or not they are under community control, will act exactly as they do now (and as they always have) when it comes to protecting capital. The police are the descendants of slave catchers and have not strayed from their roots. They suppress rebellions just like they did in their slave patrol days. Slave patrols terrorized and disciplined runaway slaves, eventually returning them to plantations. Today their descendants, the police, spread racial terror by arresting and brutalizing Black and Brown people to fill up the prison industrial complex.

The problems of racist policing we face today are inseparable from capitalism. Racist cops or lack of antiracism training are not what make the police racist. The institution of police — true to its origin — is a living example of maintaining a racialized capitalist system. The police or public safety officers will not hesitate to brutalize or kill workers taking over a factory. There is no peaceful way to evict unhoused people from an encampment or to deport undocumented immigrants seeking refuge or to bust a union of predominantly Black and Brown Amazon workers. More “good cops” or cops in T-shirts will not stop “illegal acts” that result directly from capitalism’s exploitation of us for profit.

People often feel compelled to choose an option on the table in the interest of wanting to “do something.” But we must be mindful that capitalism will not solve the problems it has created. The call for police reform is a prime opportunity for the Democratic Party, one of the two parties of capital, to co-opt and infiltrate activist work through nonprofits and philanthropy.

The solutions on the table, all too often, cater to the interests of the capitalist ruling class rather than the people most affected by these problems. A fight against violent racist policing cannot be had without an understanding of the police’s fundamental capital-protecting function and how it cannot fulfil that function without being racist. Our abolition work must be centered around organizing the working class and oppressed people to rise up against the injustices of racialized capitalism and imperialism everywhere.

Left Voice welcomes discourse around these ideas and welcomes people from the Twin Cities to reach out.