You Can’t Be Neutral on a Moving Train: It’s Up to Us to Fight Fascists

One year after the right-wing attacks at Charlottesville, it’s up to us to fight both the white supremacists, as well as the capitalist state in the streets. 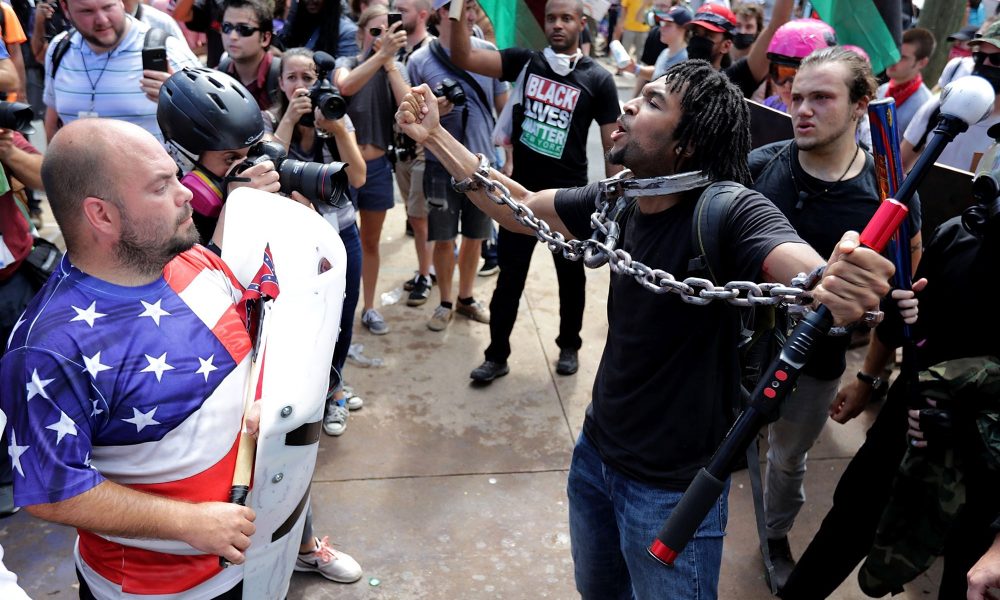 On August 12th of last year, fascist mobs descended upon the University of Virginia, carrying torches and chanting “Blood and soil” and “One people, one nation, end immigration!” Their brazen invocation of white supremacist and Nazi slogans and symbolism was lost on no one.

Their “Unite the Right” protest was called ostensibly to oppose plans to take down a statue of Robert E. Lee, the Confederate leader who fought to maintain slavery. In actual fact, however, the protest was meant to terrorize people and to demonstrate the fascists’ growing strength. However, they did not march unopposed. Thousands stood opposed to their race hatred including Heather Heyer, who was murdered by Neo-Nazi James Alex Fields when he drove his car into a crowd and also injured 35 people.

Heyer, a paralegal, whose favorite motto was “If you’re not outraged, you’re not paying attention,” was murdered in just one more example of the very real and virulent hatred of the right wing against the left, people of color, and immigrants.

That was the response from the President of the United States, equating the hate-filled white supremacists who beat up protesters and injured 35 people with those who opposed their brazen violence.

After 48 hours of a media frenzy and political crisis in the Republican Party, Trump was forced to retract. But the message was clear. As The Guardian stated: The U.S. President is a neo-Nazi sympathizer.

The response from people all over the U.S. was overwhelming. The so-called “alt-right” had called a march in Boston a week later, and 15,000 showed up to shut them down. Left groups, non-profits, unions, and independent people disgusted by the display of hatred in Charlottesville showed up to dwarf the neo-Nazis.

Since then, there have been several mobilizations and confrontations with fascists. Last weekend, there were right-wing marches called in Portland, Berkeley, and Washington D.C. In Portland, the “Patriot Prayer” rally was met with hundreds of protestors. At Berkeley, the protest entitled “No to Marxism in America 2 / Exposing Communism” was also met with hundreds of counter-protestors.

You may be interested in: Noam Chomsky and Chris Hedges Are Wrong – Antifa and Nazis Are Not the Same

“The riots in Charlottesville a year ago resulted in senseless death and division,” Trump posted on Twitter Saturday morning. “We must come together as a nation. I condemn all types of racism and acts of violence. Peace to ALL Americans!” While less inflammatory than last year’s remarks, these words show that Trump continues down the road of equating counter-protestors with neo-nazis, and condemning division rather than white nationalism.
There is no moral equivalency between those who advocate the eradication of immigrants, people of color and leftists and those who take the streets to fight them. US history has been on the side of white supremacists; the capitalist state does the work of persecuting and terrorizing immigrants, people of color and the left.

White nationalist groups have coexisted peacefully with the government and often collaborated with them throughout U.S. history. We know what the state does when it wants to dismantle something — just look at the Black Panthers. The FBI imprisoned, killed, and infiltrated the Panthers until they were a mere shadow of their former power. And yet, the KKK and other white nationalist and alt-right groups are not only alive and well, they have most recently found political representation in the form of Donald Trump, who separates immigrant children from their parents. Quotes like this would make any white nationalist proud: “We have people coming into the country, or trying to come in — and we’re stopping a lot of them — but we’re taking people out of the country. You wouldn’t believe how bad these people are. These aren’t people. These are animals.”

Whether headed by Barack Obama or Donald Trump, the state enacts nationalist and racist policies. It was true when Obama was locking up undocumented children, as well as when Trump did the same. It was true when the police murdered unarmed people–Eric Garner, Mike Brown, Tamir Rice, Philando Castille– under the Obama administration, and it is the same under the Trump administration.

The police have demonstrated over and over again their sympathies with white nationalists standing by while neo-nazis attack counter-protestors. After last week’s “No to Marxism” protests, 20 counter-protestors were arrested— many for “working with others to commit a crime.” What crime? Protesting and protecting themselves against hate groups. Within hours, police published a list of the names of protesters online, and even the photos, names and neighborhoods of individual protesters–placing an easy target on their back.

In California, three anti-fascists who were charged after an anti-hate rally in Sacramento demonstrated that “California police investigating a violent white nationalist event worked with white supremacists in an effort to identify counter-protesters and sought the prosecution of activists with ‘anti-racist’ beliefs, court documents show. The records… also showed officers expressing sympathy with white supremacists and trying to protect a neo-Nazi organizer’s identity…”

The police are not independent mediators who can protect us from the dangers of white nationalists and fascists. The state is the problem, not the solution.

Trump’s “Make America Great Again” is a nostalgic slogan for white nationalists, harking back to the good old days of more open racism and legal segregation in the pre-civil rights era, or even back to slavery. Trump’s famous MAGA rallies fuel his supporters with vitriol and have explicitly encouraged violence against those who oppose Trump. During his campaign run, he was endorsed by KKK grand wizard David Duke, an endorsement Trump refused to disavow until public outcry forced him to.

The only people who seem to agree with Trump are white nationalists. David Duke tweeted his thanks to Trump.

Thank you President Trump for your honesty & courage to tell the truth about #Charlottesville & condemn the leftist terrorists in BLM/Antifa https://t.co/tTESdV4LP0

Trump’s policies, as well as his rhetoric, have followed suit. The Muslim Ban, the DACA repeal, and the family separations are perhaps the most atrocious examples.

Under his purview, white nationalism has grown and flourished. According to the Southern Poverty Law Center, formally organized hate groups have increased by 4% from 2016 to 2017 to a total of 954. Hate crimes reported to police in America’s ten largest cities rose 12.5 percent in 2017– the highest total increase in over a decade.

No “Free Speech” or “Love Thy Neighbor”: United Action Against Neo-Fascists

We must reject the liberal idea of “protecting free speech” embodied in the absurd positions of the ACLU. The ACLU’s determined stance to protect “free speech,” despite the planned and targeted aim of inflicting violence is another example of the failure of our legal system, the nonprofits, and the universities to keep us safe.

We must also reject the liberal rhetoric of “loving your neighbor”– a language used by Donald Trump himself. This moment does not call for more love and passive coexistence with those who wish to annihilate us people of color and immigrant women. This moment calls for hate against the state that locks us up and murders us. It calls for hate against the President who sexually assaults women while calling Mexicans rapists. And it calls for that hate to be transformed into organizing in our workplaces and in the streets.

Because the problem is the capitalist state, we can’t fight the neo-fascists by voting in Democrats who hold up the same institutions of systemic violence. We have to organize our power in the streets and in our workplaces. The massive counter-protests in Boston last year are an example: there are more of us than them. We can stop them in the streets. Washington DC’s march today also demonstrates this.

The Washington D.C. area metro workers also provide an example. Amalgamated Transit Union (ATU) Local 689 were informed that they were to give three private metro cars to neo-Nazis. The union promptly responded, “Local 689 is proud to provide transit to everyone for the many events we have in D.C. including the March of Life, the Women’s March and Black Lives Matters. We draw the line at giving special accommodation to hate groups and hate speech.”

Similarly, the Sioux Falls AFL-CIO passed a number of amendments banning anyone in a white supremacist group from holding a leadership position in the union. Their statement reads “It is our duty to let our fellow workers know that Fascism, White Supremacy, and its organizations have only ever existed to divide us as workers and do the dirty work of the Boss Class. The White Nationalists have always been bought and paid for by those in power, they exist not to fight for any ideal, but to destroy the progress made by us as working class people. That is why the SIoux Falls AFL-CIO voted to Ban all Fascists and White Supremacists from our organization.”

In addition to taking the streets against the right, we can and should provide a response as a class — we don’t serve neo-Nazis. Not only will we refuse special trains, we can refuse them accommodation at hotels and gas at gas stations. The capitalist state has shown that they will protect and defend neo-Nazis. We, the working class can, will, and must fight them in our workplaces, as well as in the streets.