Across the Spanish State, young people have been protesting the arrest of rapper Pablo Hasél and facing heavy police violence under the command of a supposedly “progressive” government. These young people need a revolutionary party that fights against repression, the monarchy, and the whole Regime of ‘78. 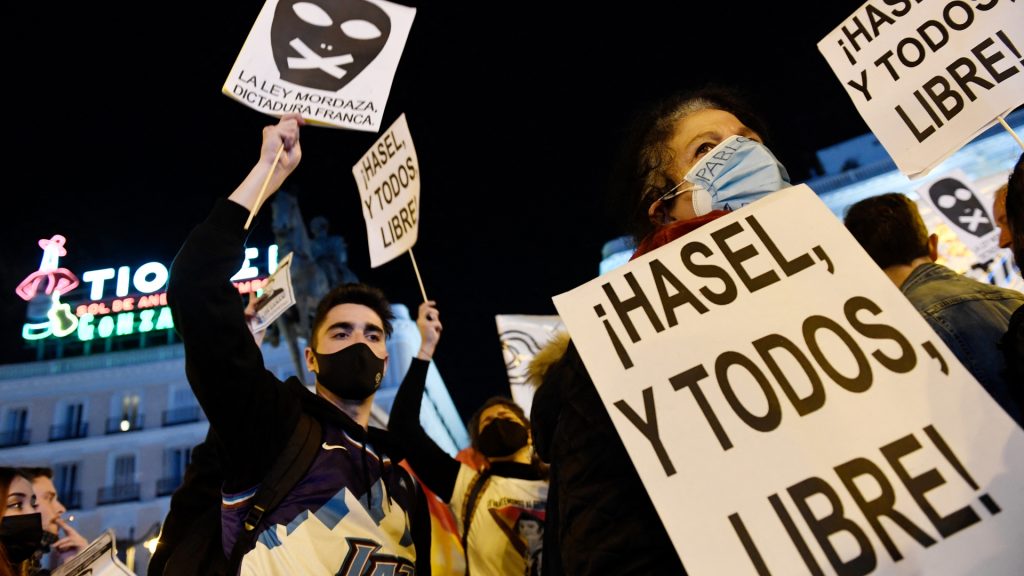 Juan Carlos I is a thief. That statement shouldn’t be too controversial. The former king of Spain, the father of the current king, fled to Dubai last year to escape an investigation into his corrupt dealings with Saudi Arabia. In other words, even Juan Carlos I agrees that there is good reason to call him a ladrón, a thief.

Yet Pablo Hasél, a left-wing rapper from Catalonia, has been thrown in prison for nine months for making statements like that on Twitter. “Insulting the crown,” which sounds like something taken from a Medieval legal code, is a crime in today’s Spanish State. So is “supporting terrorism” — a charge that can be raised against anyone defending the Basque Country’s right to self-determination. This is in the middle of the European Union, which likes to present itself as a bastion of democracy.

Hasél refused to go to prison voluntarily, and was arrested at the university of his home town of Lleida on Tuesday. The last three nights have seen massive youth protests in Barcelona, Madrid, and other cities across the Spanish State. The police have attacked the demonstrations with terrible violence. One young woman even lost an eye after being shot with a “non-lethal” weapon.

These are the first big protests since the Spanish State declared its first lockdown in response to the pandemic almost one year ago. After three days of riots, the protests are only growing. Young people are even calling for a school and university strike.

It’s no wonder that these “lèse-majesté” laws and the violent repression used to enforce them are touching a nerve with young people. Across the Spanish State, young people suffer from an unemployment rate of almost 50 percent, while education is subject to brutal austerity measures. Yet the state spends hundreds of millions of euros to maintain the House of Bourbon in a life of luxury. These public subsidies are apparently not enough for the aristocrats, though, as they seek to enrich themselves through endless corruption. Juan Carlos I was originally installed by fascist dictator Francisco Franco as his successor, and the role of the House of Bourbon was guaranteed in the anti-democratic constitution of 1978. That’s why students have been holding self-organized referenda for the abolition of the monarchy for several years.

This repression is taking place under the government of Pedro Sánchez, which considers itself the “most progressive in history.” The government is made up of the social democratic PSOE and the left-wing alliance Unidas Podemos, which consists of the neoreformist party Podemos and the more traditional reformist Izquierda Unida.

While Podemos is formally opposed to the monarchy and in favor of the right of self-determination for Catalonia, they are part of a government that is upholding all the institutions of the imperialist state. Their “progressive” government is continuing to repress the pro-independence movement in Catalonia and defend the patents of pharmaceutical corporations that are preventing enough vaccines from being manufactured.

The general secretary of the Communist Party of Spain (PCE), which forms part of the government coalition via IU, even tweeted in support of the police. “The obligation of the FCSE [Forces and Bodies of State Security] is to prevent small demonstrations from ending in chaos” — these were the words of the speaker of the parliamentary group of Unidas Podemos.

This is not limited to the national government. Some of the worst repression is taking place in Catalonia, where the Generalitat (the Catalán government) is made up of the pro-independence parties ERC and JxCAT. They were subject to violent repression and long prison sentences by the Spanish state — yet these same bourgeois parties are attacking young people protesting against the monarchy.

The ongoing riots in Spanish cities might be the start of a democratic mass movement of young people, similar to the Indignados movement that broke out on May 15, 2011 (15M). Young people began occupying city squares ten years ago as part of an international wave of protests that included occupations of Tahrir Square in Cairo and Zuccotti Park in Manhattan, among many others. Back then, they denounced a “political caste” that “does not represent us.” Podemos was created as that movement receded — but the new party with its neoreformist program has ended up in a neoliberal government, and thus clearly does not represent young people either.

These constant betrayals by the official reformist Left can also go in the other direction. The elections in Catalonia last Sunday saw a minor breakthrough by the far-right party Vox who won 7.7 percent of the vote. Their campaign is not limited to their traditional Spanish nationalism — instead, they are trying to position themselves as an “anti-establishment” force, with demagogic calls for state aid for the middle classes at the expense of immigrants. The Far Right can present themselves as an “alternative” precisely because so much of the Left is aligning itself with a neoliberal and antidemocratic government.

With Spanish capitalism in deep crisis, it is more urgent than ever for the Left to join together in a new anticapitalist and working-class party. Such a party would call for radical measures against the crisis, such as expropriating the big banks and corporations in order to provide jobs and housing to everyone. A Left is needed that relies on mobilizations, strikes, and self-organization, rather concentrating its forces on the congress or the cabinet. The young people who have been out on the streets for the last three nights need a revolutionary party that fights against repression, the monarchy, and the whole Regime of ‘78. The political caste, including the bourgeois ministers from Podemos, do not represent this generation — and they need a political representation.

This article is based on reporting from our sister site in the Spanish State, IzquierdaDiario.es.