Today is the 20th anniversary of the occupation of Cerámica Zanon, in Neuquén, Argentina. It led to an unprecedented experience with workers’ management. In a world sinking under the weight of capitalism, Zanon continues to resist — and is a symbol for the working class. 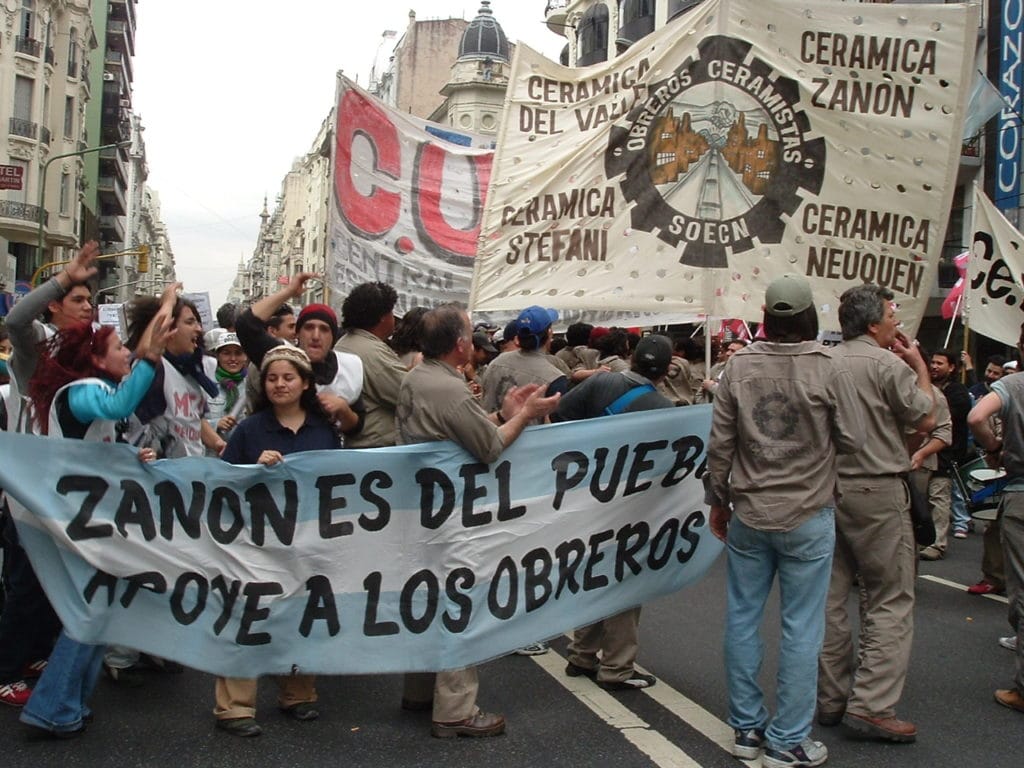 Raúl Godoy, one of the main protagonists of the Zanon struggle and the Neuquén Ceramics Union in Argentina, remembers how the occupation of the factory began on October 1, 2001. The story comes from Godoy’s book Zanon: Fábrica militante sin patrones (Zanon: Militant Factory without Bosses).

Faced with the threat of closure, our response was swift. On October 1, we took a decisive step and occupied the factory. It was a response to the bosses and the government that was equal to the attacks they were launching against us, focusing on defending jobs at a time of high unemployment and turning to the community to win their support.

The occupation of the factory aroused great enthusiasm among the province’s militant vanguard, which redoubled its support for our struggle. The occupation was not meant to shut us inside the factory; on the contrary, it became a trench of struggle.

Zanon thus became a laboratory of class struggle. From our militant point of view, the factory occupation had the immediate objective of stopping the bosses’ attack and defending jobs, but we didn’t separate it from the more general class struggle, from our perspective of class politics.

No one suspected then that Argentine president Fernando De La Rúa would resign only a few months later and that one of the biggest crises in the country’s history would begin.

After the occupation came a long struggle. In November, Zanon’s bosses officially announced the closing of the plant and the dismissal of 380 employees, who burned the telegrams and marched to the Government House. That day, the police attacked and arrested six workers. Nevertheless, between repression and threats of eviction — the most emblematic one coming on April 8, 2003 — the different governments in and out of power in rapid succession failed to clear out a handful of workers who, even on a small scale, demonstrated not only that the working class can resist but also fight for its own path forward.

During the capitalist crisis of 2001 in Argentina, Zanon was part of, and became a symbol of, a movement of “recovered factories” in which workers took over production when faced with plant closures, layoffs, or the direct flight of the bosses. In Godoy’s book, and in the video series “El hilo rojo” (“The Red Thread”), you can learn about this experience in detail, and hear directly from one of its leaders from a revolutionary militant perspective.

The Zanon experience is not a thing of the past. That is not only because today, after 20 years of workers’ management, it continues to resist and produce. It is also because of what Zanon implies for the future.

At a time when capitalism is going through an historic crisis worldwide, marked by the pandemic and its economic consequences, and when the capitalists are plunging millions in the world into misery, the Zanon experience shows an alternative. In Argentina, the government and the right-wing opposition are debating a labor reform that would introduce greater flexibility for millions of workers, deepening poverty and precariousness. These plans are similar to those the ceramics workers faced 20 years ago that eventually led to the occupation of the factory.

In the face of new attacks against the working class, the experience of the courageous ceramics workers of Neuquén remains relevant and points to the future. Despite the difficulties of 20 years of workers’ management in a sea of capitalism, the heroic deeds of the Zanon workers are still alive. They look ahead with their heads held high.