35,000 Argentinians Mobilize Against the IMF — Workers Around the World Must Join this Fight

New negotiations over Argentina’s fraudulent and illegitimate foreign debt prompted a rally of tens of thousands denouncing the predatory IMF. Workers all over the world should join their bold stand against imperialism. 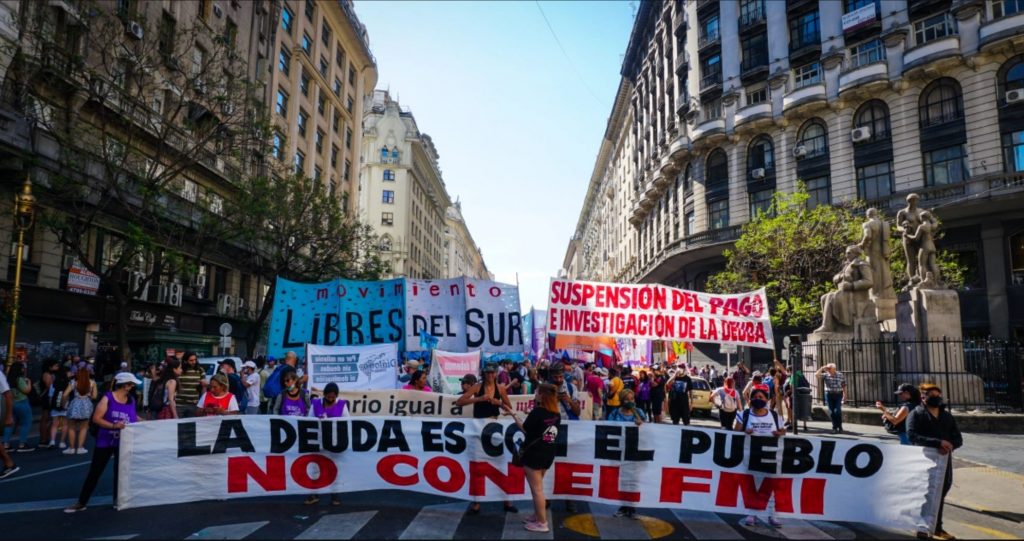 35,000 people filled the streets of Buenos Aires on December 11 to denounce the International Monetary Fund (IMF) and to demand that Argentina refuse to pay the fraudulent foreign debt the IMF claims it owes. The rally was called by hundreds of organizations, including the revolutionary socialist parties of the FIT-U coalition, trade unions, and members of Argentina’s youth, women’s, and environmental movements. The mobilization received media coverage in mainstream and international news outlets like Democracy Now!, raising awareness of the ongoing movement to reject the Argentinian government’s adjustment agreement with the IMF.

This mobilization comes in the context of Argentina’s structural crisis which has been worsened by the never-ending pandemic and marked by the vaccine nationalism of imperialist countries. Research by the Borgen Project highlights that in Argentina the unemployment rate rose from 9.8 percent in 2019 to 11.7 percent in 2020, with young women facing the highest unemployment rate. However, even before the pandemic hit, Argentina was facing an economic crisis inflicted by the predatory International Monetary Fund (IMF).

To ensure that states in crisis pay their debts, the IMF requires governments to follow the economic plans and political measures it deems necessary to raise the dollars that they need to pay lenders. This results in austerity, more flexible work, a reduction in wages and pensions, an increase in the retirement age, an increase in basic necessities like electricity, gas, and internet, and a reduction of subsidies for workers in subjugated countries. While these plans strangle the working class, they also enable multinational companies to come in and plunder the natural resources of the country, oftentimes via extractivist projects like mining and fracking that threaten both the environment and the communities that live near these projects.

From the time of the Argentinian dictatorship until now, more than $600 billion U.S. has been paid to the IMF, while Argentina’s debt has increased by a factor of 43. The IMF played an important role in Argentina’s economic crisis in 2001, both creating the economic conditions for the crisis and intensifying the crisis after the IMF refused to pay out part of a loan, leading to a dire social crisis and important mobilizations. Eventually, under the administration of Néstor Kirchner, Argentina began to repay the IMF debt. Under the presidency of Mauricio Macri and in the midst of a new economic crisis, an additional $57 billion was lent to Argentina by the IMF in 2018. Today, the center-left administration of Alberto Fernández has maintained policies that favor the interests of the Argentine and international capitalists including the payment of the illegitimate foreign debt to the IMF.

Within this context, Argentina is also facing a changing political landscape. The ruling Peronist coalitions in the country, which have dominated the Argentinian political terrain for decades, faced a political earthquake in Argentina’s recent legislative midterms after the strong performance of the far-right and the far-left, with the left under the Workers’ Left Front – Unity (FIT-U),  a coalition of Trotskyist parties formed in 2011, which is now the country’s third largest electoral force and has four national deputies in congress. This coalition is made up of four parties, the Party of Socialist Workers (PTS), the Workers’ Party (PO), Socialist Left (IS); and the Workers’ Socialist Movement (MST). Left Voice is a sister site of the media network of the PTS, La Izquierda Diario. The FIT-U attracted sectors of the working class against the backdrop of Argentina’s crisis by putting forward a program that centered on working class demands like a reduction of the workday to six hours. The FIT-U was also the only force that called for an immediate halt to payments of the foreign debt.

The electoral success of the FIT-U shows the strength of these anti-imperialist demands, and the rally in Buenos Aires shows the way forward to make the break with the IMF a reality. Elected PTS candidates Nicolás del Caño, Myriam Bregman, and Alejandro Vilca gave powerful speeches calling on working class and oppressed sectors to unite and mobilize with all their strength to confront the multinational capital and their partners in the government.

Vilca concluded by saying, “The agreement with the IMF that is about to be signed is a declaration of war against all working people.” He called for action, saying, “We have to make the movement that we began today in Plaza de Mayo even bigger and organize thousands of workers all over the country. We have to raise a program of class independence so that capitalists pay for the crisis. We cannot do this task alone, we have to unite all sectors, but above all we have to organize the social force that comes from below, the powerful working class, which produces all wealth. The working class is the only one that can defeat this agreement with the IMF and overthrow this austerity plan.”

Outside of Buenos Aires, there were also rallies and marches called in other cities throughout the country. This was an important step forward to confront and reproach the coming attacks against the working class and oppressed.

The fight in Argentina should serve as an inspiration to workers around the world. It is not just possible, but essential to reject any compromise with capitalists who make workers pay for the crises of capitalism. The IMF represents the international nature of the violent capitalist system, so the movement against it must be just as international in scope. Workers should unite around the world in solidarity with the members of our class who refuse to further endure the IMF’s exploitation and a capitalist response to crises which places further burden on workers.

For workers in the United States – the heart of imperialism – we are all the more obligated to amplify the movement against the IMF. The Left must work to foster internationalism within the US working class and we must reject the idea that socialists can focus solely on national gains for workers at the expense or members of our class in subjugated countries. For an international movement in the streets against the IMF!