5 Takeaways from the Huge Socialist Rally in Argentina

A soccer stadium in Buenos Aires, brimming with people: nothing to call home about. An arena packed with over 20,000 Trotskyists—combative rank-and-file unionists, LGBT activists, women organizing against femicide and for abortion rights, university students and youth resisting austerity: a different matter altogether. 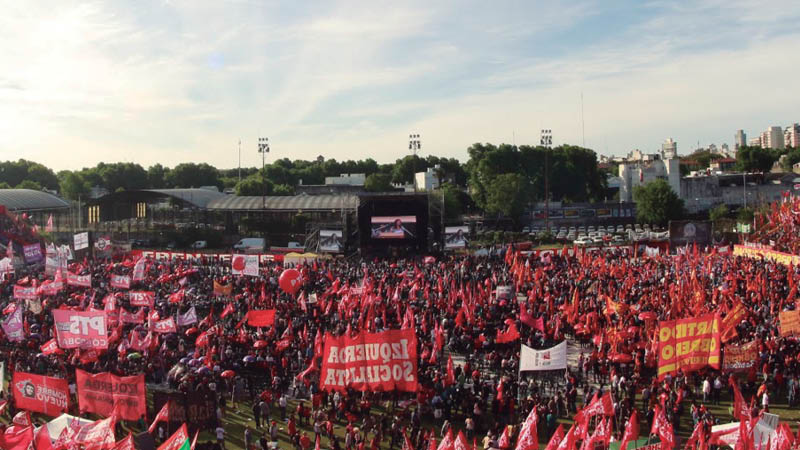 The November 19 rally organized by the Left and Workers’ Front (Frente de Izquierda y los Trabajadores, FIT) ended with the sky burning above Atlanta Stadium. It was an enormous event taking place in the long shadow cast by Trump’s electoral victory 11 days prior and a year after the conservative Cambiemos coalition took the Argentinian presidential palace. This development is a major feat for socialists organizing in the Southern Cone; it is well worthy of the attention of leftists and radicals around the world, particularly those organizing to build a working-class fightback against Trump presidency and the deepening neoliberal attacks, racism, cutbacks, and repression sure to come. Below are 5 takeaways:

1. It’s possible for the revolutionary socialist left to command influence on a mass scale. The rally demonstrates an organized left whose power and reach are measured in the tens of thousands; a left that is inextricably intertwined with the working class and joined in daily struggle against bosses, bureaucracy, regime, and imperialism; a left whose political activities are not relegated to shouting from the sidelines, trolling other groups on Facebook, or project-hatching in closed meetings.

The composite organizations of the Left Front (PTS, PO, and IS) find resonance in the mainstream media and make their perspectives known through their own press (the PTS’ La Izquierda Diario Argentina gets over 2 million hits monthly). Far from “paper members” and ideologues, the militants and sympathizers of these groups are in daily struggle at their own structures of work and school. They are protagonists in factories and workplaces, advancing rank-and-file organization and taking over shop-floor committees to combat both employer and labor bureaucracy. They organize roadblocks in defense of workers’ rights, lead and support factory occupations, and mobilize thousands against austerity policies and capitalist attacks by the Macri administration and the previous Kirchner regime. They are fierce combatants within the #NiUnaMenos movement, advancing a class perspective and unwavering commitment to fighting gender oppression and femicide.

Under an openly socialist platform with full independence from capitalist parties, the Left Front received 3.27 percent of the vote during the last presidential elections (about 800,000 votes) and over 1.2 million votes for legislative positions. The Trotskyist electoral coalition has obtained a total of 4 seats in Congress and dozens of city council posts.

2. This happened because of, not in spite of, sticking to principles. The enormous growth and potential of the Left Front is based on its staunch and tested commitment to revolutionary strategy and class independence.

The Argentine political system is no less rigged and domineered by capitalist interests than that of the United States. The Left Front enters elections with the purpose of denouncing capitalism and uncovering the traps and follies of reformism. The Left Front indicts the very system in which it campaigns, denouncing the capitalist system, bourgeois parties, union bureaucracy, and government.

“We agitate in congress for the right to abortion, present projects for the nationalization of the oil and gas industry, advocate the expropriation of businesses which close or fire employees and support projects for Argentina’s indigenous people. We fight against the femicides, the criminalization of protest and pollution by the mining corporations. We bring to parliament the voice of immigrants, environmentalists, the youth, and the homeless.”

In a separate interview , Christian Castillo, Congress Member for the Left Front, explained, “We want to use electoral and parliamentary platforms to strengthen extra-parliamentary organization and struggle. This implies gaining a deeper insertion of the revolutionary left inside the working class, in the factories, in the oppressed sectors of the youth, and in the women’s movement. In sum, we must make use of this ‘preparatory’ stage to construct a strong revolutionary workers’ party which is capable of playing a decisive role in the coming rounds of the class struggle…

“We believe that each victory we win on the terrain of the political superstructure must be put at the service of increasing the militancy of the workers and the youth, while building up leadership in parts of the mass movements” (emphasis mine).

From their congressional seats, Left Front leaders are a breath of revolutionary air, sounding off against the system–even interrupting the everyday buzz to pay homage to Leon Trotsky during a session in Congress .

The main focus of the movement, however, takes place within the extra-parliamentary sphere, where the supporters and militants of the Left Front participate in class struggle. An important dimension is their opposition to union officialdom, which often functions as a “buffer” through accomodative relationships with employers and the State . This is in stark contrast to left groups that scramble to win union positions and end up making concessions in order to stay in leadership, at times suppressing rank-and-file militancy and resistance.

3. It takes many to build a relevant revolutionary left and this can happen without bowing to opportunism.

In the US and elsewhere, it is not uncommon to encounter smug cynics who find something like the Left Front (and the recent rally) either questionable or improbable. To respond, it’s worth seeing what these left realists propose instead:

They say we can’t fill a stadium–so let’s make Marxism an obscure specialty of intellectuals. They plant their flags and proclaim their revolutionary program, but dismiss democratic movements and do not respond to the pressing problems of the oppressed, the working class, and the youth.

They say we cannot capture the political imagination and win support of the masses through a socialist program; that the workers and radicalizing youth are not ready to put their vote toward a real socialist platform or party.

They say let’s do everything and anything to grow our own membership even if it means diluting our program and backing politicians who represent bourgeois parties–including campaigning for Bernie Sanders, obscuring his allegiance to the Dems, talking little of his support for imperialist war, and even registering people with the party that has proven to be the graveyard of social movements in the United States.

These positions are expressions of both opportunism and sectarianism in the left. In a scathing critique of the Mensheviks, Leon Trotsky wrote, “Opportunism does not know how to wait. And that is precisely why great events always catch it unawares.” Saying this may seem “paradoxical,” he explains:

“In periods when friendly and hostile social forces, by virtue of their antagonism and their interaction, create a total political standstill; when the molecular process of economic growth, by intensifying the contradictions, not only fails to disturb the political balance but actually strengthens it and, as it were, makes it permanent – in such periods opportunism, devoured by impatience, looks around for ‘new’ ways and means of putting into effect what history is not yet ready for in practice. Tired of its own inadequacy and unreliability, it goes in search of ‘allies.’ It hurls itself avidly upon the dung-heap of liberalism.

It implores it, it appeals to it, it invents special formulae for how it could act. In reply, liberalism merely contaminates it with its own political putrefaction. Opportunism then begins to pick out isolated pearls of democracy from the dung-heap. It needs allies. It rushes from place to place, grabbing possible allies by their coattails. It harangues its own adherents, admonishing them to be considerate towards all potential allies: ‘Tact, more tact, still more tact!’ It is gripped by a special disease, the mania of caution in respect to liberalism, the sickness of tact; and, driven berserk by its sickness, it attacks and wounds its own party” (emphasis mine).

Both hasty opportunism and ascetic sectarianism are barriers to socialism, hindering the left’s potential to win over millions to revolutionary ideas.

4. The FIT rally wasn’t an easy thing to pull off. It was only made possible through relentless organizing and concerted unity-in-action.

At the rally, Del Caño (PTS) began his closing speech with an abrazo (embrace) to the various organizations gathered at the rally. Some skeptics may wonder–Is this a real development? Perhaps these Argentines aren’t in the practice of critique, are more loyal to political tradition, organization and ritual than the free-thinkers of the Anglophone north. Is the Argentinian Left and Workers´Front only possible thanks to the suppression of dissent–or the void of debate?

The Left Front is not a political monolith, nor is it a cure or cover for disagreements within the left. Its formation in 2011 was not predicated on the decision to put aside all political disagreements for the sake of coordination and electoral gains. In fact, the composite groups of the Left Front openly and fiercely argue their positions, publishing their differing positions in their press. In actions, they march in distinct columns and maintain separate organizational discipline. They dispute positions in student organizations, workplaces, shop-floor committees, and during the presidential primaries.

However, these important delineations have not stopped them from acting together in key moments and using their combined forces to raise the banner of socialism, thus bringing together the most conscious elements of the working class and youth. The Front is forged around clear agreements and the perspective of class independence; self-labeled “socialist” organizations that do not agree on the common program are not accepted as coalition affiliates.

5. Let’s take the cue: our time is now. Today, even the centers of empire are being shaken by political convulsions. In the US, the Democratic and Republican Party have failed to smooth over societal rifts and discontents with their usual buy-offs and rhetoric.

Eight years ago, Barack Obama took the White House with a vast popular mandate and proclamations of change to come. Obama will exit in less than 2 months–after having deported over 2.5 million undocumented men, women, and children, overseeing 7 wars (with no end in sight) and $700 billion in authorized bailouts (of which $187 billion were dispersed to Fannie Mae and Freddie Mac). He leaves behind 28.5 million people without healthcare insurance, a system of mass incarceration that strips 2.3 million people of their freedom and many of their rights, and a nationwide police force that kills Blacks at a rate 3 times higher than whites.

Eight years of crisis, of the Obama administration and the promise of continuing anti-worker, impoverishing policies via Hillary Clinton shoved the door wide open for Trump.

The economic crisis, which has been heaved onto the backs of workers and the poor, has sent people off in search for answers, leading to jarring shifts to the right and left. For many whites, the solution is envisioned in a shroud of white nationalism and racist scapegoating that places blame on people of color, the poor, Muslims and immigrants. Trump’s election points to the rising Right. His demagogic campaign emboldened the deep-seated racism among working-class and middle-class whites. His recent election grants reactionaries and white supremacists greater legitimacy and will bring them into positions of power.

On the other hand, a growing number of especially young people are rejecting the political establishment, participating in protests for the first time, seeking socialist ideas. During the primaries, millions supported Sanders’ bid for presidential nomination, applauding him for raising challenges to the political system. It is an urgent task for socialists and the left to build on these developments, support the most progressive and radical elements, build common experiences through struggle, and refuse to cave to opportunism. It is time for the audacity to organize and win people to revolutionary socialism.