On the Anniversary of the Fourth International’s Founding

80 years ago today, on September 3, 1938, a secret meeting took place in a house in Périgny, a small town outside of Paris. 26 delegates represented eleven revolutionary organizations from around the world. Two dozen more organizations supported the Congress even though they were unable to send representatives. 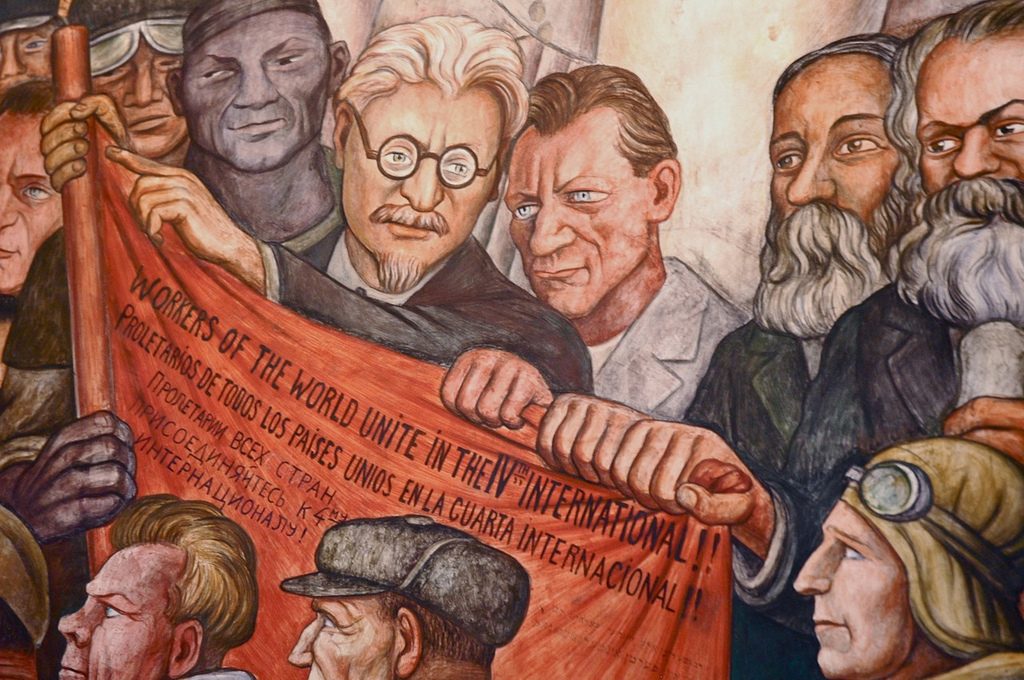 Workers of the World Unite in the 4th International
Man, Controller of the Universe (1934) Mural by Diego Rivera, Bellas Artes, Mexico City

This Congress took place under conditions of terrible repression: it’s secretary, the 29-year-old German revolutionary Rudolf Klement, had been kidnapped and murdered by Stalinist agents only six weeks earlier. His dismembered corpse was later found in the Seine. What’s more, the author of the Congress’ draft document, the 59-year-old Russian revolutionary Leon Trotsky, was prevented from attending. He was living in exile across the ocean in Mexico because every other country denied him a visa.

The eleven organizations represented at the Congress were small. Only the American section, the Socialist Workers Party had several thousand members. The delegates believed that the Russian section, composed of tens of thousands of Communists who had resisted the rise of Stalinism, was the largest group. Yet the previous winter, most of them had been massacred in a Stalinist Gulag. No one outside the USSR could yet believe the rumors about this political mass execution.

While the first three internationals had each been founded when the revolutionary workers’ movement was on the ascent (in 1864, 1889 and 1919 respectively), the Fourth International was founded in 1938, a time of darkest reaction.

Nazi Germany had annexed Austria and was reaching for Czechoslovakia. The Spanish Revolution, which had begun with a workers’ uprising against a military coup in 1936, was in its death throes. A new war was being prepared. This is why delegates from Poland and Austria argued against the foundation of an international, worried that it would be an empty gesture.

Why then did the Congress vote, with 19 votes to 3, to proclaim a new “world party of social revolution”? Precisely because a second imperialist maelstrom, even more terrible than the first, was getting closer day by day.

The Spanish Revolution had been the last chance for the workers of Europe to stop the march towards war. The workers and peasants in the Spanish state fought heroically, collectivizing factories and farms, forming militias to hold back the fascist troops. But the working class was not just fighting against Generalissimo Francisco Franco and his backers, Hitler and Mussolini. The workers were forced to fight against their own leaderships as well, the Social Democrats and Stalinists who governed the Spanish Republic.

The Second (Socialist) International had gone over to the camp of the bourgeoisie in 1914 when most of its member parties voted to support the First Imperialist War. The Third (Communist) International, originally founded as an alternative to chauvinist reformism, itself moved into the counter-revolutionary camp in 1936. During the Spanish Revolution, the Stalinists were determined to maintain an alliance with the “democratic” bourgeoisie at any price, even if this meant massacring thousands of revolutionary workers. The Stalinist bureaucracy, which had taken over the Soviet Union and the Communist International, was so afraid of proletarian revolution that it actually fought to defend bourgeois rule. Only the Left Opposition, founded by Leon Trotsky and his co-thinkers to fight against Stalinist degeneration, maintained the Comintern’s tradition.

Leon Trotsky worked during the First World War to bring together socialists from the warring countries for a common revolutionary struggle to end the war. He authored the manifesto of the Zimmerwald Conference for this purpose. Trotsky understood firsthand that the workers’ movement had been disoriented and paralyzed when the war broke out in 1914 and most socialist organizations came out in support of their “own” bourgeoisie. He was determined that this would not happen again. When the new war finally erupted, with the parties of the Second and Third Internationals supporting capitalist governments, there had to be an internationalist banner that was visible around the world.

The Trotskyists of the Fourth International fought heroically against Nazism. The war, and especially its immediate aftermath, was marked by massive revolutionary upheavals, both in the imperialist countries and the colonial world. Working people had enough of the capitalist system that had condemned them to the second mass slaughter of a generation. Despite its efforts, however, the Fourth International was unable to lead these struggles to victory. Its cadres had been decimated – including Leon Trotsky himself, murdered by a Stalinist agent in 1940. Countless other activists were murdered by fascists, Stalinists, or bourgeois-democratic regimes. This helped the Social Democrats and Stalinists contain the revolutionary wave at the end of the war, saving the existence of capital by suppressing workers’ self organization.

The Fourth International became disoriented in the 1950s and abandoned its revolutionary heritage, splintering into different factions. Yet its legacy – especially the Transitional Program adopted by the founding conference in 1938 – summarizes the lessons of the most important struggles in the history of the working class. The forces of Trotskyism are alive today. Capitalism is leading humanity to new forms of barbarism, which is why we fight to re-build the Fourth International. A world party of social revolution is necessary to liberate humanity from the chains of capitalism before it’s too late.