800 Workers at a Pork Plant Get Covid-19: The Company Is Responsible

Workers at the massive Smithfield pork plant in Sioux Falls, South Dakota are suffering one of the worst outbreaks of Covid-19 in the United States. Dangerous working conditions spread the disease. The company knew this but forced workers to keep producing with no regard for their safety. 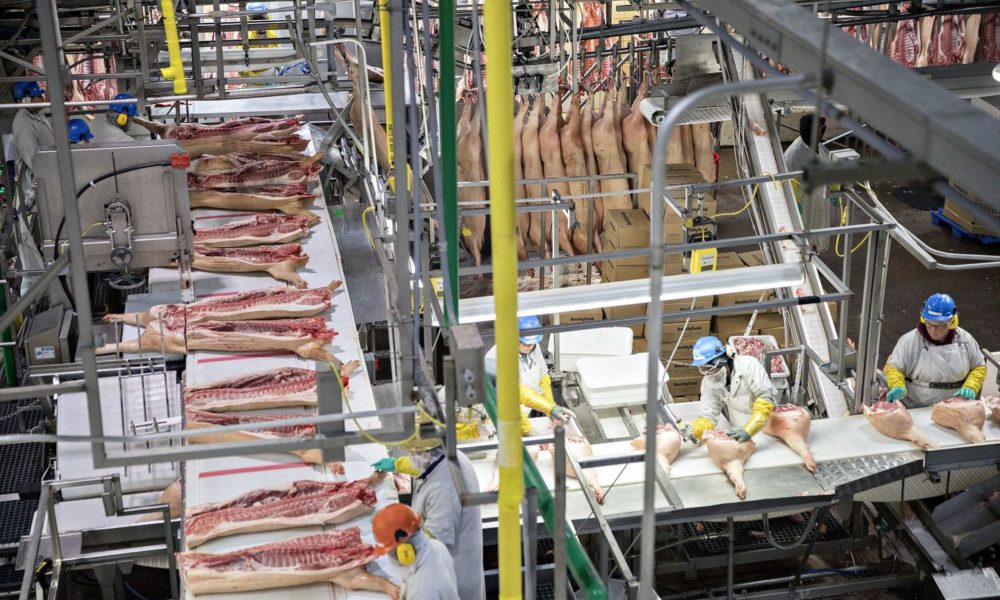 Smithfield employs 3,700 people at its plant in Sioux Falls, South Dakota. The plant slaughters 19,500 pigs a day — 5 percent of U.S. pork. Most of the workers are immigrants from Ethiopia, Mexico, South Sudan, Honduras, Myanmar, Somalia, Guatemala, and other poor countries.

Inevitably workers must pass within one foot of hundreds of colleagues in the hallways, locker rooms, cafeterias, and cutting lines. The same conditions have spurred Covid-19 outbreaks at meat plants from Minnesota and Wisconsin to Colorado, Nebraska, Missouri, Iowa, Pennsylvania, North Carolina, and Georgia.

801 workers at the Sioux Falls plant have tested positive, together with 206 people close to them. The outbreak has killed Agustín Rodríguez Martínez, aged 64, an employee with two decades of experience originally from El Salvador, and Craig Allen Franken, 61, who worked for Smithfield his entire adult life.

The company knew of its first infection on March 24 or earlier. The virus spread exponentially for several weeks. Ahead of Easter Sunday and Monday (April 12-13), Smithfield promised to “completely shutter” to sanitize and put up cardboard and plastic sheet dividers. This would not end transmission, as potentially hundreds of staff were already carrying the virus. But even during this “shutdown,” many cars were seen in the parking lot. The mayor admits that the company lied, and the local AFL-CIO alleges the plant ran 60 percent production. On Easter, with 238 known infections, Smithfield finally agreed to shut down indefinitely after a request from the mayor and the governor. Yet the company insisted on waiting three more days to actually halt production.

Smithfield denied contributing to the outbreak, saying it took a “very proactive approach.” Relying on racism, the company blamed workers for getting themselves sick. A spokesperson said the outbreak was so severe because of the plant’s “large immigrant population,” claming “Living circumstances in certain cultures are different than they are with your traditional American family.” They slandered the workers as dirty, ignorant, and untrustworthy with help from governor Kristi Noem, who claimed, “99 percent of what’s going on today wasn’t happening inside the facility. It was more at home, where these employees were going home and spreading some of the virus” by living too close together.

One sick worker, Michael Bul Gayo Gatluak, 22 and originally from South Sudan, says, “With how we work on the line, I would say I got sick because of them not taking safety measures.” His job is “really, really close” to other workers chopping fresh-killed pigs. “The job is so heavy. You have to breathe so hard.”

In early March, union officials requested masks, overcoats, entrance checking for fevers, and less crowding in 500-capacity cafeterias. But Smithfield waited on most safety measures until early April. Only April 6 did they start checking for fevers. Instead of protective masks, they gave out beard nets.

Smithfield concealed infections with a policy of informing only employees whose work stations were in the same area as a person who tested positive. The fact that workers are required to move around was willfully ignored. One worker who tested positive said, “I clearly would have gotten it at the factory. This week I have worked on three different floors. I’ve eaten in two different cafeterias … I’ve been walking through the whole place.” Employees from the eighth floor of the plant were quarantined, but everyone else was told to keep working.

What Is Really Going On?

Average plant wages are around $16 an hour. Smithfield never raised them. Instead, they offered $500 to employees who could go all of April without an unapproved day off. The company says their “Responsibility Bonuses” show their “immense gratefulness” to employees “for their selfless sacrifices.”

Meanwhile, the local Argus Leader wrote union members wanted essential-worker hazard pay, which “would be considered hourly compensation about 1.5 or two times their normal pay.” One worker said, “I feel like they’re bribing us with [the bonus] to come to work sick. That’s how you know they don’t care.”

Both Sioux Falls workers killed by Covid-19 were in their sixties. It is unconscionable that they were still working. All meatpackers over 50 should be on paid leave. Agustín Rodríguez, 64, had a rough job sawing the legs off dead pigs. He mopped floors with a fever shortly before he was hospitalized.

When CEO Kenneth Sullivan closed the plant, he claimed, “We have continued to run our facilities for one reason: to sustain our nation’s food supply.” This is an effort to sweep Smithfield’s abuses under the rug, as if the company were operating for public benefit. This patriotic propaganda that all Americans are in it together is like a drug to keep workers from getting organized.

The major union in the industry, including at Smithfield, is the United Food and Commercial Workers union (UFCW). What union leaders have done is ultimately troubling.

Local AFL-CIO president Kooper Caraway has publicly said management delayed safety action as long as possible for profit. But while some workers were demanding a two-week shutdown, Caraway told the Argus Leader that was unrealistic because the government considers the plant essential. He suggested the union would be happy with minimal safety measures: “Even if 10 people get exposed in a day rather than 11. If you can implement a program where even one or two less people get exposed during a shift, that’s one or two less people.” Of course reducing infections is good, but suggesting workers would be satisfied if the company allowed 90% of the contagion to continue is horrifying.

The response of UFCW leadership was worse. As the disease was exploding, they told the Argus Leader, “We applaud [Smithfield’s] decision to temporarily close the plant [over Easter weekend] to push for an even safer work environment.” What does “even safer” mean in this context?

The union has said nothing about forcing companies to send older workers home with pay, even though a 70-year-old shop steward and a 78-year-old grandfather working at JBS plants were killed by Covid-19. Smithfield workers were promised only two weeks of shutdown pay. For many, this compensation is half their normal paycheck because they routinely put in 66 hour weeks — overtime that costs exhaustion and chronic pain.

Union officials endeavor to cooperate with the meat companies. An Iowa UFCW president actually suggested it might be impossible for plants to move workers a full six feet apart and told the Des Moines Register, “We can’t stop the plants. If we stop the plants from running, we stop feeding the country. We want to do everything we can to make sure the employees are safe to keep the plant running.”

Every part of this explanation directly overlaps with what the Smithfield CEO said. Unfortunately, it amounts to accepting the company’s excuses.

They claim that workers who do hard physical labor, waking up at 4 a.m. and often working six days a week for years, would be guilty of taking food away from the people and hurting America if they dared to fight for their human needs. But nothing is said about the company raking in profits and even murdering workers to increase them.

Smithfield’s parent company W.H. Group, which slaughters around 30 million pigs per year in plants in both the United States and China, saw its profits skyrocket by about one third in 2019 to $1.38 billion. It is disturbing that UFCW officials do not bring up these soaring profits in their response to the outbreaks. Reuters published a report on the corporation’s financial success in late March. The head of W.H. Group had touted to the media that it got through the pandemic in China with very limited impact on production.

It is true that many Smithfield workers are reasonably afraid for their jobs and want to keep working. A 25-year-old employee explained, “I have a lot of bills. My baby’s coming soon — I have to work.” At the same time, he was afraid of infecting his pregnant wife. His spouse, a former employee, said bitterly, “Smithfield—  they don’t care about employees. They only care about their money.”

Workers are pressured in these two painful directions. Nonetheless, work can mean solidarity. Before Smithfield even checked temperatures, there was a “sick-out” strike without union support by 800 to 1,000 workers at a JBS meat factory in Colorado. Hundreds of workers also called in sick days at a Nebraska JBS plant.

Trade union leaders won’t even whisper the word “strike” when thousands of workers are thinking about it. They are limiting themselves to polite requests. We need a workers’ movement that asks who controls the factory, that threatens to disrupt the bosses’ profits, and that allows workers to use their immense power — this could change the meat industry and the world.