After the successful electoral campaign of Alexandria Ocasio-Cortez, there is a temptation to endorse other electoral candidates, including so-called “progressives” like Cynthia Nixon. What lessons can we find in the campaign promises of Bill De Blasio and other Democrats? 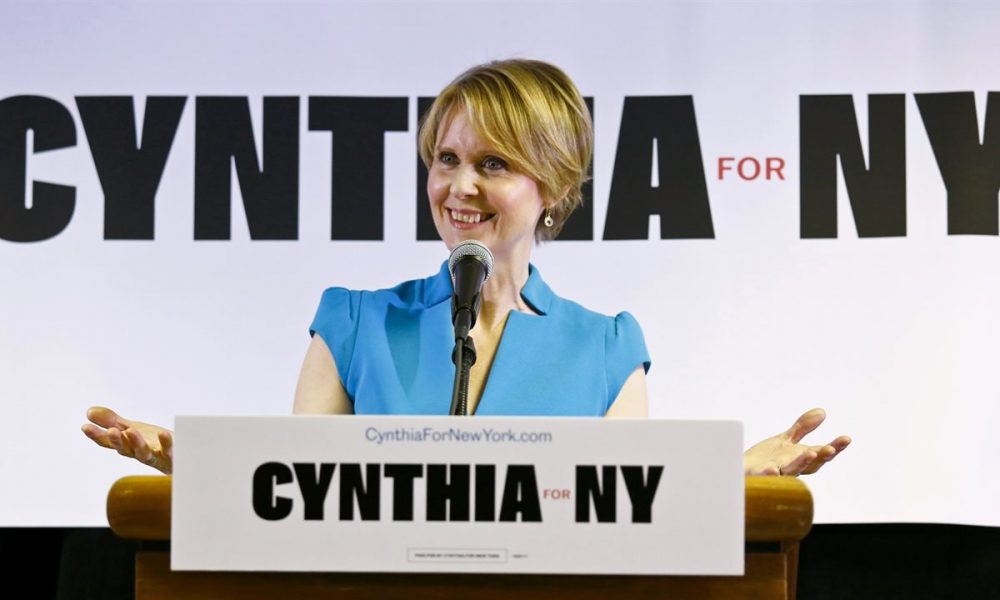 “We’re a blue state, we’re a proudly Democratic state, but we’ve got a governor in there who governs like a Republican.”

This is how Cynthia Nixon explained to Stephen Colbert her reasons for running for Governor of New York State against Democratic Party incumbent Andrew Cuomo during their interview on The Late Show in April.

Nixon’s criticisms of Cuomo are valid: he is absolutely in the pocket of corporations and real estate developers; he certainly allowed Republicans to gerrymander state districts and caucuses with Republicans (instead of Democrats) in the Independent Democratic Conference (IDC); he most definitely has been starving public schools — especially those in the most impoverished neighborhoods of New York City — of funding, blocking funds from the Campaign for Fiscal Equity even as he increases money granted to charter schools.

Nixon is not only proud of being part of a state that is a stronghold of the Democratic Party, she shows few signs of diverging from the platform of the greater Democratic Party. While Ocasio-Cortez discusses demilitarizing the border, free college, and Medicare for All, Nixon is running on much tamer demands. The only parts of her platform that differentiate herself from other Democrats are her calls to legalize marijuana and fully fund public (K-12) education.

She is also campaigning heavily on the disgraceful state of New York City’s public transportation system, which has drawn sharp criticisms of Cuomo for his mismanagement. Nixon’s campaign webpage says: “Cuomo has said he’ll use comprehensive congestion pricing to fix the subways before, and then he abandoned it. Why should we believe that Cuomo will stick with it this time? Especially when there’s no chance of it getting through the legislature before they break in June? And why is he ruling out a millionaires’ tax as part of the funding solution?”

In terms of national positions, while Nixon has echoed Ocasio-Cortez’s “abolish ICE” demand amid public outrage about the behavior of law enforcement border agents, so have Sen. Kirsten Gillibrand and New York City Mayor Bill de Blasio, hardly the most progressive of Democrats. (Interestingly, Bernie Sanders has staunchly refused to support the demand).

A recent article in The New York Times reported on the similarities and differences between the campaigns of Ocasio-Cortez and Nixon, listing the reasons a victory for Nixon will be far more difficult due to the staunch support Cuomo has secured among Latino communities — who favor his rhetoric around Puerto Rico — and some of the most powerful unions in New York. At the same time, it points out: “By knocking off Mr. Crowley, the Queens Democratic leader, Nixon supporters also believe that Ms. Ocasio-Cortez’s could be a sign of not only a change in the district electorate, but further afield in the state, as a new generation of Democrats register.”

As a Democrat further to the left than Cuomo, Nixon is already under fire from his conservative base. Harvard Law professor Alen Dershowitz has called for votes against her for her signature on a 2010 letter written by Jewish Voices for Peace — who Dershowitz calls “Israel haters” — which voiced support for Israeli artists who declined to perform in the West Bank. She has also been “accused” of engaging with the Boycott Divest and Sanction (BDS) campaign against Israel.

The problem is that Nixon doesn’t fare too well on more progressive issues like labor rights, which would be among her best chances for garnering the votes of this “new generation” of voters disillusioned with the political establishment who, she and the other Democrats hope, can be pulled into building their party. In March, she drew the ire of both public and private sector unions when she answered questions about how she would improve the MTA. Nixon said, “The unions have to understand … with the deals that they have now, you can’t hope to make improvements to the trains in a fiscally responsible way. Everybody’s got to pull together, and everybody’s got to make sacrifices.”

In response to this attack on union leaderships, both TWU President Tony Utano and Mario Cilento, president of the New York State AFL-CIO made scathing comments about her demands for “sacrifice.” (Both of these heads of bureaucratic union leaderships had already thrown their support behind Cuomo, which doubtlessly colored their responses.)

Nixon answered the criticism with a statement that insisted she had been misunderstood, stating, “I always have and always will stand with working families and my union brothers and sisters.” She added that “Union families should never have to foot the bill for Cuomo’s mismanagement of the MTA.”

The backtracking statement not withstanding, these comments are par for the course with politicians who embrace capitalism; when they demand that working families make “sacrifices,” it only and always means more profits for the wealthy and worse conditions for workers. The rhetoric that “unions need to be more reasonable” — used by Republicans and Democrats alike with few differences — is an anti-worker dog-whistle used to assert that union workers are privileged and they should be “normalized” (into worse and more precarious conditions).

Nixon, like Sanders and Ocasio, leans on the fact that many people understand the underlying corruption of American politics. According to The New York Times, “Gov. Andrew M. Cuomo… has now amassed a $30.5 million campaign chest in 2018 that so far has helped him scare away serious rivals in his bid for a third term. [He] received donations from an array of wealthy individuals and companies, from big Albany lobbying shops to real estate developers, from Hollywood moguls to the pharmaceutical industry.” Nixon, like many candidates, point to just how corrupt and unfair this rigged system and how it silences is the ordinary American citizen who has only a single vote, not millions of dollars, to represent their positions.

The cry of “We need to get money out of politics!” is not a new one. Nixon’s pledge “not to accept any corporate money,” implying this keeps politicians “honest” is a hollow one because there is no such thing as “keeping money out of politics” in a capitalist government structure. While an individual candidate who rejects corporate money and large donations is less likely to be beholden to such entities once entering office, this doesn’t address the constant pressure from party structures and other forces to compromise on demands, especially without a movement behind the candidate to keep them accountable.

Nixon calls her demands to legalize recreational marijuana in New York and an end to cash bail “racial justice issues.” She accurately points out the disparity between white people and people of color when it comes to arrests and prosecutions of marijuana charges, and cash bail has been widely recognized as one of the most commonly-used oppressive measures in the criminal “justice” system. The issue here is the shortsightedness of the demand. While the official legalization of marijuana would be a step forward — in that it is already effectively legal for the wealthy white community but leads to higher incarceration rates for People of Color — and an end to cash bail would keep thousands of people out of facilities like Riker’s Island, relying on this to in any way decrease incarceration rates misses the forest for the trees. Mass incarceration is not a product of one drug law too many or a lack of bail oversight. It is a systemic issue that demands a steady rate of arrests and prosecutions to keep the public and private prison systems running. Nixon’s band-aid solutions would create the illusion of progress but no lasting improvement.

Cynthia Nixon has a strong connection to liberal and Democratic Party Mayor Bill De Blasio. Calling her an “architect of [his 2013] campaign,” the New York Times states that it was during this campaign that she “witnessed the disruptive potential of a message about the ravages of inequality,” and that “It’s a script she hopes to replay versus Mr. Cuomo.” In fact, two other engineers of De Blasio’s 2013 campaign were her go-tos for her own campaign managers and now head up her team.

However, De Blasio turned out to be a massive disappointment to progressives who hoped he would make great strides towards remedying the dramatic inequality in New York City. Despite his success at the implementation of universal pre-kindergarten programs throughout the city, many other reforms were blocked by Governor Cuomo. Specifically, Cuomo fought De Blasio’s challenge to union-busting charter schools, and after meetings with Cuomo, De Blasio quickly caved to the political pressure and backed down.

Likewise, his “Tale of Two Cities” narrative — which included skyrocketing rents as a measure of how working people in New York City were denied economic opportunities — turned out to be more of a campaign promise than a demand. The New Yorker article “Bill De Blasio, Friend of Real-Estate Developers?” details De Blasio’s cozy relationship with major real estate developers. But perhaps his most egregious capitulation to maintaining the racist and oppressive status quo of New York City was his choice for the new police commissioner just after he announced he would end “stop and frisk” policing — Bill Bratton. De Blasio spent years refusing to speak directly against repeated Bratton’s racist comments to the press. And when Bratton finally did resign after months of protests, De Blasio vehemently denied that the resignation had anything to do with the widespread outcry against Bratton. The lack of acknowledgement of the connection between police oppression and economic precarity — and the way police oppression functions to assist gentrification — is totally absent from the programs of liberal politics, making the need for “law and order” an accepted part of liberal governance.

Given De Blasio’s progressive rhetoric during his campaign and what became of these promises after his election, and given Cynthia Nixon’s affinity for his campaign strategies and his politics, there is no reason to think that she would be much different as a governor than De Blasio is as a mayor. And “progressives” in executive positions have never stood firmly behind the working class.

While Nixon comes from a working-class background, her espousal of capitalist politics (and her choice to build a bourgeois political party) place her firmly on the side of the capitalists. Although wearing a more progressive veneer than that of Andrew Cuomo, Cynthia Nixon is as committed to securing businesses and capitalist profits as any other Democrat. A vote for her is a vote of confidence for the representatives of the capitalist class and those who uphold the very system we are determined to bring down.