Democracy and Action at the Hilton Hotel

Today negotiations have begun for the first contract at the Stamford Hilton. The union goes to the negotiation table with high spirits having built an organization that has not only maintained enthusiasm throughout the hotel, but has also politicized the workplace. 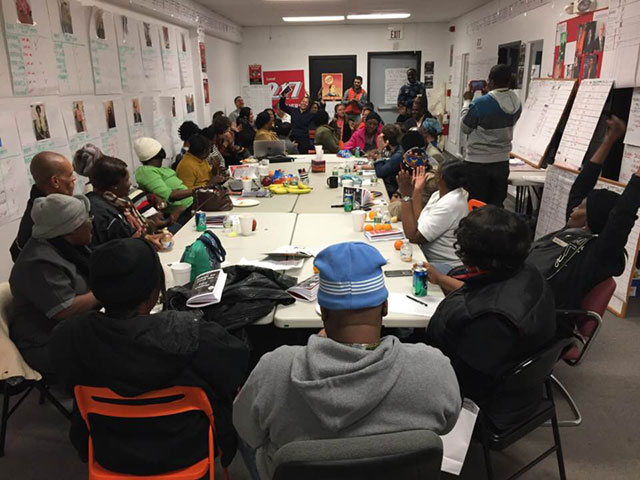 The Hilton workers won a resounding victory on December 4 when they voted 110 votes to five in favor of union recognition with Unite Here Local 217, and they have no intention of stopping now. The workers have been busy during the past few weeks, consolidating gains like lowered room quotas for housekeepers while beating back the bosses’ counterattacks (such as attempts to remove individual workers from schedules) through workplace militancy and developing a culture of action, democracy, and political education. The bosses have been busy consulting with anti-union attorneys to stonewall negotiations and try to sink the first contract. On February 19, the sides clashed at the bargaining table, but the real fight will continue in the workplace and in the streets.

The low-wage, mostly immigrant workers have been preparing for this fight since even before union recognition was won, and from that victory onward, they have not stopped organizing. Weekly committee meetings, which were vital throughout the election campaign, have continued consistently. Where there might otherwise have been a lull following so many months of constant organizing, the meetings have taken on a new sharpness. They are now entirely led by the rank and file.

These assemblies are sometimes raucous as arguments erupt in three languages — Creole, Spanish, and English — but this lack of order is to be expected as workers grapple with collective decision-making in a society that so strives to crush democracy from below. The ability to run meetings democratically is not an inherent one, but it is learned through action, and compared to the manicured meetings run by union staff — the type of meeting that many of the labor left are accustomed to — this expanding democracy is a sign of widening class consciousness. What makes the process effective, and keeps people coming week in and week out, is that it is connected to militant action in the workplace as well as the to broader drive to win the best contract possible. Issues from each department are brought up, discussed, and a plan is formulated to fix them. Department meetings are scheduled to keep every worker abreast of the struggle, and procedures for electing ad hoc commissions, such as for the recently elected negotiating committee, are implemented. If the unions are schools of combat and training grounds for an independent working class politics, then the committee meetings are the classes and school is in session. 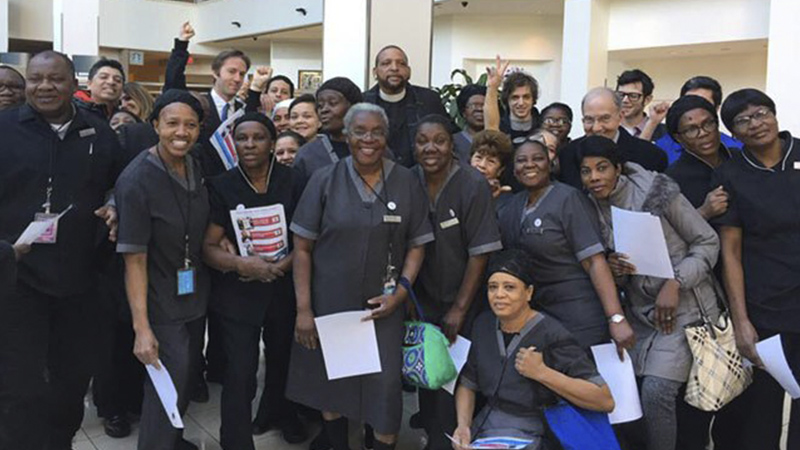 Concretely, there are examples of the growing power of the union going into negotiations. On January 19, many workers were shocked to learn that two of the key leaders in the housekeeping department had been removed from the schedule for the next week, ostensibly because of complications in Temporary Protected Status (TPS) renewal. The two workers had renewed their TPS before with no problems, and everyone on staff knew that the reason given by management was a lie; these workers were targeted for their strength. Coincidentally, the weekly committee meeting was scheduled for that evening, and the main point on the agenda was making sure to get the two workers back on schedule. Following a discussion on what TPS is and the fact that the bosses would use any excuse to try to divide the working class, the committee members (numbering over two dozen) resolved that this was beyond an outrage and the first major battle between staff and management in the contract fight. If they allowed two leaders to lose at least a week of wages, a precedent would be set and the workers would look weak. An action was passed and dozens marched to his office that Monday at lunchtime. The two housekeepers were put back on schedule.

This deepening engagement has not only developed through fights at work, but has also been cultivated through political education. The hall has become a classroom and there is a deliberate prioritization of the politicization that comes from militancy, including a program of regular classes. On February 6, there was a class on Marxist economics. Nearly 30 workers participated, learning about the labor theory of value and how, specifically, their work enriches the owners. Exploitation was explained, as well as how powerful workers can be at the point of production. Everyone left with far more energy than expected coming out of a two-hour economics course. February 23, Professor Adolph Reed will be lecturing on race and racism in America at the union hall; the lecture will doubtlessly be well-attended and presents an opportunity to better connect class struggle with academia as well as connecting the union with the larger communities of Stamford. The book Teamster Rebellion has also been read and discussed, and further study groups will be formed for people interested in studying socialism and the labor movement in greater depth. Militant workers of Left Voice and Socialist Action strive to combine politics and the struggle for ‘bread and butter’ demands. 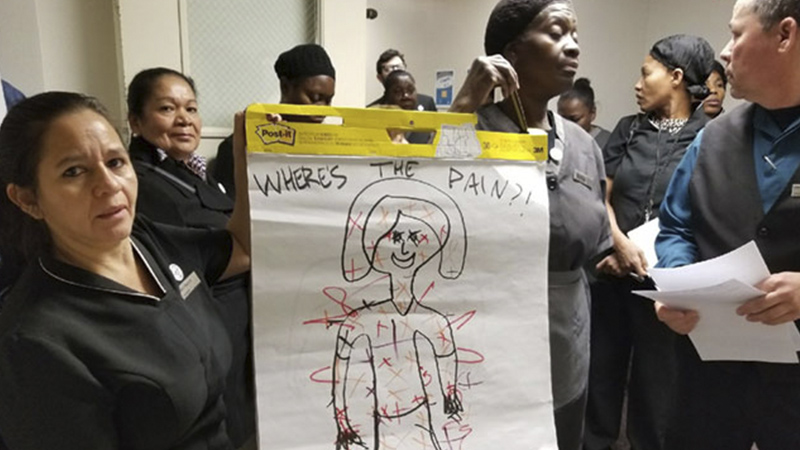 Rank-and-filers have brought together their experience and political development elsewhere in labor and on the left. On February 8, over 20 committee members of the Hilton traveled to the New Haven Omni to meet with the workers as well as workers from the Hartford Hilton, both of which are long-time unionized hotels that are also going into contract negotiations. The three committees have resolved to wage a statewide fight for the best contracts around the three demands of “Higher Wages, Affordable Healthcare, and Pensions,” which, though lacking in detail, will now be fleshed out through common activity. A statewide hotel workers’ struggle that produces an action program around wages, healthcare, and pensions could be a lightning rod for the rest of labor throughout the state. This will take great effort, but it is a possibility because of the work Hilton workers have done since winning the union.

An illustration of the relationship between thriving militancy and burgeoning politicization can be found in the involvement of Hilton workers with the International Women’s Strike. The IWS seeks to build a women’s movement independent of the Democratic Party, one that is anti-capitalist, anti-imperialist and fights all forms of oppression. At the kickoff panel for organizing a International Womens’ Day strike on March 8, Ines Orjuela, one of the most active and combative members of the housekeeping staff spoke about the struggle at the Hilton. She said, “We are a hotel that is united. The women are united and with the men in the hotel; we are like a chain. To have a strike, to have a union, you have to be like a chain — very strong and united.” Committee members will also speak at Wesleyan University on March 1 to further engagement with students and other communities in support of the struggle and the strike. This has already began with pictures in support of the workers from the NYC-IWS and the DSA Strike Solidarity Working Group. 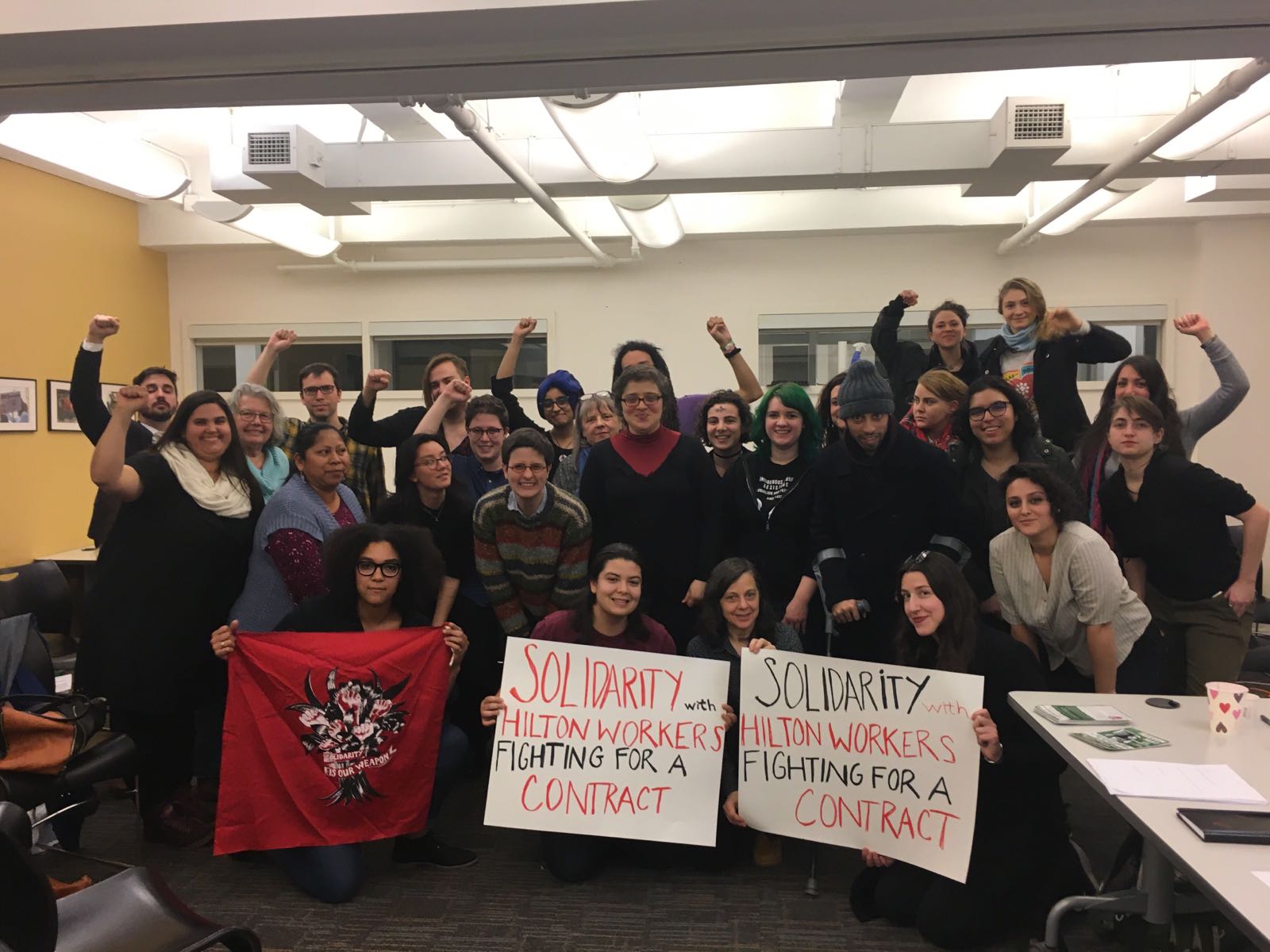 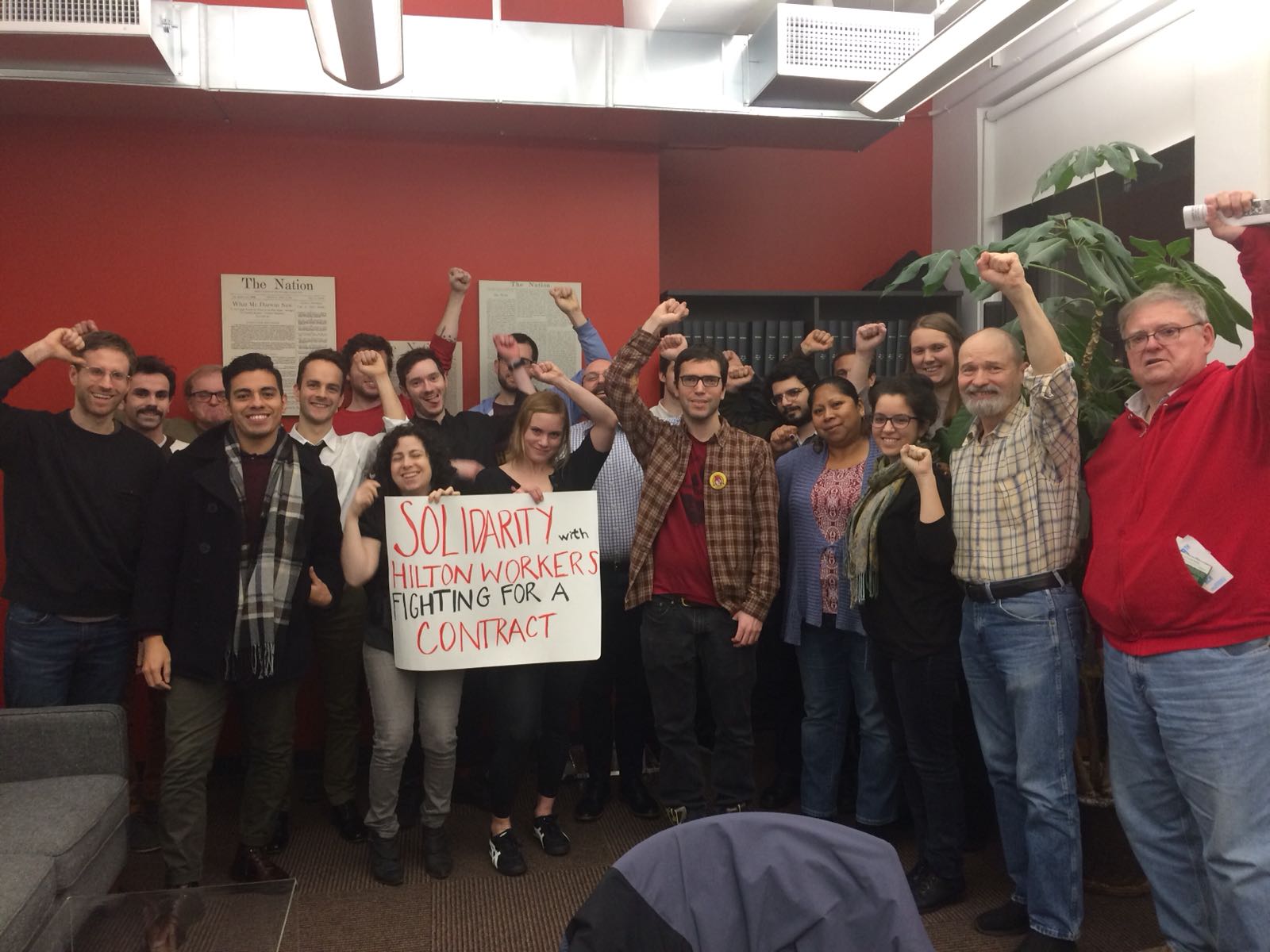 Yesterday was the start of negotiations and a vital next step for the workers of Stamford. The contract struggle is also a continuation of fights won in the workplace and a radicalization through democratic action and socialist politics. It began yesterday as the elected negotiations team parlays with the bosses’ lawyers at the conference table, but it will be won through struggle.