Members of the DSA in Denver introduced an “anti-capitalist plank” into the local Democratic Party constitution. Is this really the way forward to build socialism? 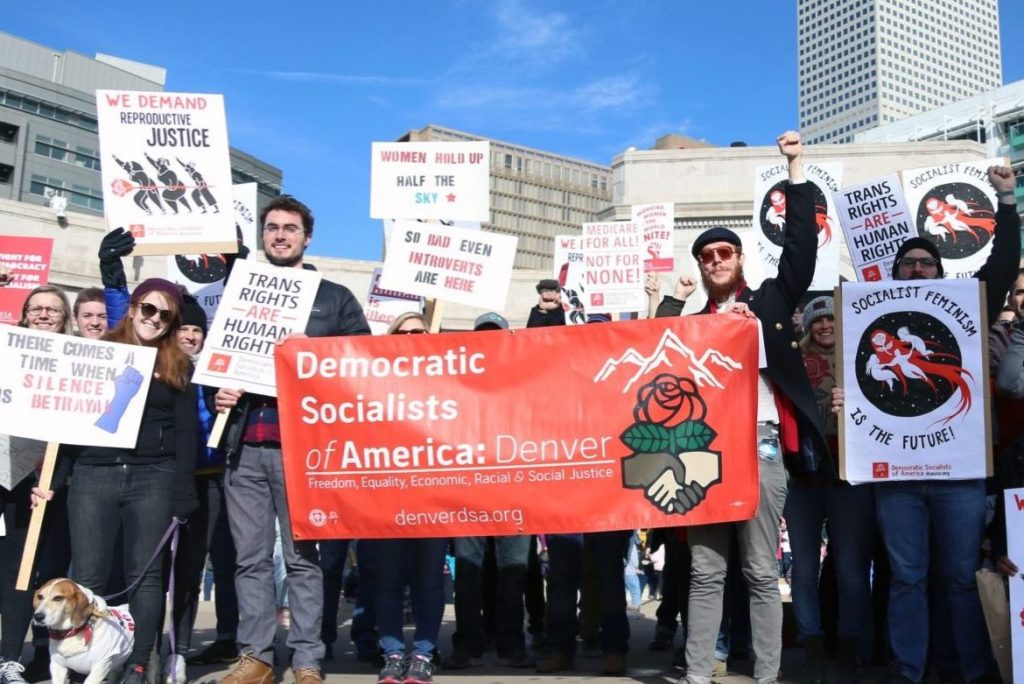 The title of an article on In These Times caught my attention a few days ago: “The Denver Democratic Party Platform now Has an Anti-Capitalist Plank, Thanks to Socialists.” A very confused kind of socialist, I thought.

Published on Wednesday, March 28, the article tells the story of a group of members of the Democratic Socialists of America (DSA) who petitioned the local Democratic Party in Denver to introduce an amendment which read, “We believe the economy should be democratically owned and controlled in order to serve the needs of the many, not to make profits for the few.”

The fact that this amendment actually passed and will be incorporated to the Denver Democratic Party Platform is indeed surprising. It might be, as In These Times columnist Miles Kampf-Lassin suggests, a sign of how left the political situation has become. He reports that 90 percent of the 1,000 attending delegates voted for the amendment. With the dramatic fall in its voter base, the Democratic Party is scrambling to recover as part of its constituency continues to swerve left.

At the same time, the language in the plank was vague enough for delegates to not really know they were “introducing an anti-capitalist plank” into their constitution. After all, ‘democratic’ is one of those floating signifiers that changes its meaning according to who uses it and in what ideological context. A “democratically owned and controlled economy” is a far cry from a socialist perspective. Democratic Mayor of Denver Michael Hancock can claim that the economy in his city “serves the many, and not the few,” while he pays teachers poverty wages.

But that’s not why I felt compelled to write these lines. There is something deeply wrong in this piece of news: it is the implication that these are the battles socialists should be waging — that this is a step in the long run towards socialism.

The DSA is a “multi-tendency” political organization. Its members usually highlight this feature as an advantage, a sign of openness and non-sectarianism. While these characteristics may be an accurate description, the lack of a unified strategy (understood as the series of battles that pave the way to socialism) puts the organization at risk of squandering its resources in isolated, purposeless tactics or in a strategy that is ultimately ineffective.

One strategic question that has been at the center of debates within the DSA is the relationship with the Democratic Party. The DSA has traditionally been used to corral individuals with an interest in socialism into support for the Democratic Party. Since 2016, however, the massive influx of new, mostly young members has changed the DSA’s physiognomy.

Against the background of a renewed interest in socialism among the youth, thousands of people in their twenties and thirties decided to take up the fight for socialism in their hands and get organized in the DSA. Today, there is much more questioning and rejection of Democrats among its ranks than ever before. But the spectrum remains wide. While there is an inchoate far left sector that would rather maintain total independence from the Democratic Party, most of its members opt for a more “tactical” approach.

A large section, probably the majority or its members, while still critical of the Democratic Party, favors a “smart,” temporary utilization of its ballot line to accumulate enough political clout for a later run on its own DSA ticket. Using it as a sort of springboard, members of the DSA who run on a Democratic ballot, they claim, will be politically accountable only to the DSA. This tactical use of the ballot line would ostensibly imply no other involvement with the Democratic Party, and so the risk of getting co-opted by the political party machine would be negligible. That sounds beautiful, but is it possible?

The Denver DSA episode portrays the story of an organization that needs an urgent re-examination of strategy and tactics. The members of this branch of the organization judged that trying to introduce quasi-socialist language in the preamble to the constitution of the Denver Democratic Party was a worthwhile political battle. I just can’t understand how this idea was even considered.

The author of the article, himself a DSA member, gleefully commends the feat of his comrades and refers to Thomas Piketty’s most recent paper, where he empirically shows that moving left is a winning electoral strategy. What he does not clarify is that Piketty’s findings assert that this is a winning electoral strategy for the Democratic Party, not necessarily for the DSA.

What’s worrisome is that Kampf-Lassin doesn’t understand — or doesn’t care about — the distinction between the Democratic Party’s success and the DSA’s. This is a gross misjudgment. The Democratic Party has shown to have an extraordinary capacity to co-opt social movements and political organizations on the left in order to preserve itself. So, are the Dems unwittingly welcoming socialists that would turn the party on its head? Or is the DSA providing a left cover for the Democratic Party, allowing it to keep those voters who are moving left and reinvigorating a party that is rotten to its core?

The DSA is at a crossroads. The viability of the organization and the impact it will have on the US political landscape depend on its capacity to solve the dilemma of electoral politics, develop beyond the intrinsic weakness of a relatively new organization, and escape the shadow of the Democratic Party. Although there are some legitimate debates on how to break the de facto proscription of minority parties in an electoral system with single-member districts, one thing should be clear by now: growing the Democratic Party will not bring us any closer to socialism.

A riddle’s secret is in the framing

A debate on strategy has opened among the ranks of the DSA. In revolutionary times of the past, such as the early 20th century in Europe or the 1960s and 1970s in some countries in Europe and in Latin America, the debates on strategy revolved around how to take power and, after this, how to bring about socialism. Is it possible to do it through elections? Or do we need a social revolution? If so, what kind of revolution? Will it be through the military action of a determined minority involved in a guerrilla fight, with the support of masses of people? Or would it be a planned insurrection but with greater degrees of workers self-organization and spontaneous activity? These questions found expression in real parties and their politics, which conditioned to a great degree their successes and their failures.

The debates on strategy in the DSA are, almost in their entirety, arguments about the potential successes of different versions of an electoral path to power. Consistent with this, one of the main focuses of the organization during the past few years has been the practice of canvassing for electoral campaigns. Although there is quite some talk about building among workers, it is thought of almost as an entelechy or necessary in order to make the DSA a mass workers’ organization that will express working-class interests, breed pro-labor candidates and elect socialists into Congress. But the implantation among workers in different industries has a much more important role in socialist strategy. It provides the lever for organized workers to engage in class struggle, to stop the economy, to learn from those battles and build alternative power structures that, in a revolutionary situation, could go as far as to challenge the authority of the capitalist state. The role of the party in the process of fostering the creation of and building these alternative structures is crucial.

Solving the dilemma of electoral politics for the DSA requires realizing that elections should not be the linchpin of a strategy for socialism. The core struggle involved in the building of socialism must be class struggle. It is the direct action of the West Virginia teachers, propelled by a groundswell of rank and filers, that began to change the landscape for US labor — not the gracious initiative of an elected official. Moving ahead with the blinders of electoralism will inevitably lead the DSA to the guts of the Democratic Party and the doldrums of a failed strategy.