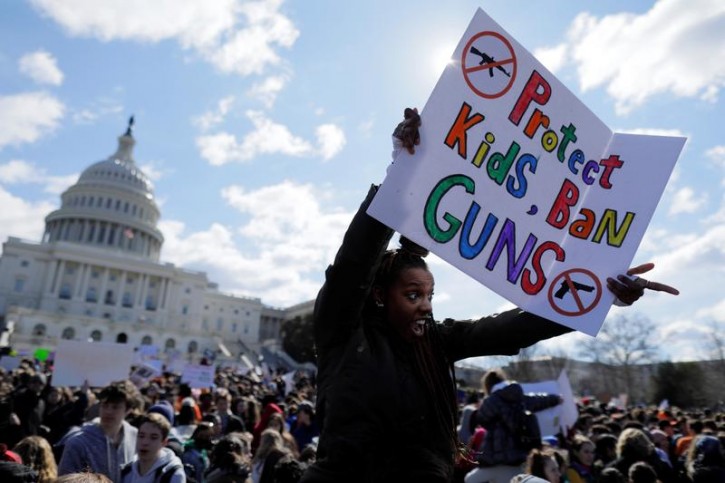 Hundreds of thousands of students, from elementary school to high school to college walked out of their schools on Wednesday to protest gun violence. Over a million students participated. Some walked out with their teachers and administrator’s blessings and some walked out in defiance of school rules. Refusing to accept “thoughts and prayers” as an effective response these mobilizations were initially called by students from Parkland High School in Florida, where 17 people were killed last month.

In a country which many would characterize as apolitical and apathetic, these massive mobilizations of young people around the country shake up the political scene and demonstrate an opening for transgressive actions and left politics. As the New York Times states, “Even after a year of near continuous protesting — for women, for the environment, for immigrants and more — the emergence of people not even old enough to drive as a political force has been particularly arresting, unsettling a gun control debate that had seemed impervious to other factors.” As I watched these protests unfold, I saw a national movement growing and kids being awoken to political life. I thought about how brave these kids were and how already they understand that we can’t rely on politicians for change. While I would love to write an article about how amazing these mobilizations are and how leftists near and far should support them, I can’t. I can’t because I know what “gun control” has meant for Black people in America. I can’t because I don’t want to rally for the largest mass murderer in the world-the US government- to hold all the weapons.

Although the primary demand for these students is “gun control,” different schools had different foci. For example, at Brooklyn’s Academy of Young Writers, the walkout was dedicated to Parkland victims and black men and women killed in police shootings in recent years. At North Lawndale CCA Academy, students addressed family and friends killed by the police and demanded an end to school closings.

In New York and cities around the country, youth chanted “Hey-hey, ho-ho, the N.R.A. has got to go!” One of my favorite moments in recent weeks was when a Parkland student confronted Marco Rubio at a massive town hall meeting about receiving NRA funding. Rubio stuttered and stammered but couldn’t promise to get the NRA’s dirty money out of politics.

It’s no secret that the NRA spends millions funding Republican lawmakers to ensure that gun laws are kept exactly as they are. Questioning the billions the NRA spends on political lobbying should be just the start; it is completely against any principle of democracy that major corporations can spend billions to represent their interests while we get a measly vote once every two or four years. This is not only true for the NRA, but also for the health insurance industry that blocks demands for Medicare for all, and the fossil fuel industry that prevents virtually any restrictions on the extraction of oil, gas and coal. These youth are right to push to get the NRA out of politics — and out of existence as well. Despite these progressive elements, there are other aspects of the gun control discussion that deserve a second look.

The issue of “gun control” in the U.S. has been a way to disarm and criminalize Black people, as well as empowering right-wing groups who, in alliance with the police, terrorized and murdered Black people. Particularly “gun control” laws came to prominence after the Civil War, when there were attempts to disarm Black people who had fought for freedom. Often it was the KKK who did the disarming, terrorizing Black people into giving up their weapons, leaving them defenseless against the terrorism that characterized life for Black southerners in the Jim Crow era. The NRA was formed in the antebellum period as well, arguing that only “responsible” gun owners who had a license should carry guns and clearly no people of color.

Another wave of gun-control laws came about in the 1960’s and 1970’s, precisely targeted against the militancy of the Black Power movement. As the The New Republic argues, it “wasn’t really about controlling guns; it was about controlling blacks.” Particularly, it was about controlling a militant sector of Black people who organized for self defense, and who proposed radical and structural changes to capitalist society. The most militant leaders were criminalized and murdered by the CIA. There are still many political prisoners today who come from this militant tradition.

Even today, laws around guns are used to criminalize Black people. As Daniel Deniver argues in Jacobin, “The only kind of gun control we have in the United States is the kind that locks up black people.” The article goes on to describe how African Americans are criminalized by gun control laws and receive much harsher gun sentences; 51 percent of the people convicted of illegally possessing a gun due to a felony were Black. Many are subject to mandatory minimum sentences, often brought forward and supported by Democrats. And, who can forget Philando Castille, murdered when he reached for his wallet after he disclosed to an officer that he had a gun in his car? There is also Tamir Rice, a 12 year old boy shot for carrying a toy gun on a play ground.

Gun control laws have always served to further criminalize Black people. How can we in good conscience organize for the murderous police to further monopolize gun ownership?

The mass murderers shouldn’t have the guns

There have been a lot of attempts to individualize and pathologize school shooters. Because they are usually white, they are painted as disturbed individuals, not (Muslim) terrorists or violent (Black) thugs. However, the problem of school shooters is not about individually deranged individuals— they are a product of a society based on mass violence.

From the genocide of indigenous people to annex the land we now live on to the imperialist wars in the Philippines, Hawaii, Vietnam, Iraq and around the globe, the history of the U.S. is bathed in blood. The carnage in the Middle East continues; three bombs an hour during the last year of the Obama administration. On the ground, soldiers are given a free pass to rape, murder and torture, as the horrific Abu Ghraib photos showed. The new CIA chief oversaw a clandestine prison in Thailand in 2002, one of the horrific “black sites” where supposed “terrorists” were tortured.

In this context, these mass shooters and perpetrators of mass violence are a continuation of U.S. policy carried out by both Democrats and Republicans, by the police, the military and security forces like the CIA. They are the last link in a long chain of state sanctioned violence.

In this context, why would we agree to give the U.S. state, the largest mass murderer in the world, more control and more of a monopoly of weapons?

The Democrats, like the Republicans perpetuate mass murder in the form of bombings, invasions and police violence. Yet, the Democrats, in general, are for gun control and seek to capitalize on these youth mobilizations for the 2018 elections. Yesterday, New York governor Andrew Cuomo, for example, participated in the “die in” in Zuccotti park, where the Occupy Wall Street occupation was violently evicted and repressed during Cuomo’s time as governor. In Washington D.C., Democratic members of Congress met with students in front of the Capitol, applauding youth and calling on them to vote out those who do not support gun control. Bernie Sanders appeared at a rally in Washington DC to speak to a cheering crowd of teenagers.

These Democrats seeks to seize this opportunity to defeat the Republicans and recover an energized electoral base, making the thousands of young people who mobilized, mobilize in the service of electing the Democrats — one of the two parties of mass murder.

So, to the youth who mobilized yesterday — I applaud your courage, your desire to change things. I want to fight beside you, walk out beside you, go on strike beside you. Together, we should imagine another world, without the NRA and corporations keeping the Democrats and Republicans in their pockets. We should fight for a world in which everyone has a safe and quality school to go to, whether they live in Parkland, Florida or Iraq. I don’t think the way to achieve this is to push for gun control, but rather, to fight against those who monopolize violence and use it against Black, Brown and working class people in the U.S. and around the world.