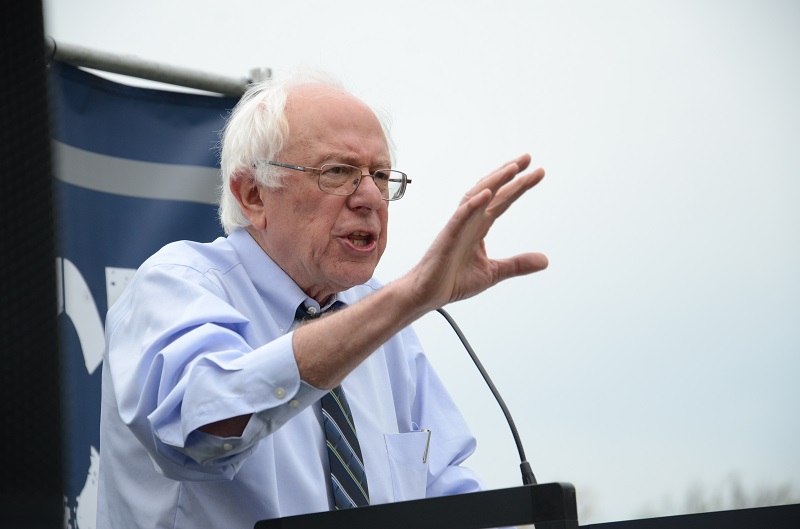 Many left groups and activists have embraced Bernie Sander’s presidential bid with unmeasured enthusiasm. At the same time, the extensive debate that has emerged among leftists (see here and here falls short of addressing the real point of discussion. There is a need to rethink the use of parliamentarism and electoral politics from a revolutionary perspective.

For revolutionaries, elections in a bourgeois democracy are little more than the gauge of the maturity of the working class, indicating the level of politicization of the masses, the polarization of society and the penetration of left parties in the working class. To be sure, there are advantageous opportunities that arise within the electoral arena that revolutionaries should grab ahold of, even if we expect nothing lasting and good from capitalist democracy.

In times of elections, politicians debate on-air, bold proposals capture headlines and people discuss politics more often. Revolutionaries can and should fight to win a space for revolutionary ideas within these debates. It is our task to denounce the plutocracy and falsity that characterize the capitalist electoral systems, and at the same time to emphasize the need for radical change from below— a revolutionary path to socialism. If we fail to do so, we are legitimizing a fraudulent, money-driven electoral system.
When aggregate forces suffice to win a seat in Congress or any local legislature, those seats should be placed at the disposal of on-the-ground class struggle (strikes, road blocks, mass mobilizations) to advance a revolutionary program and denounce the rotten legislature dressed up in democratic robes while serving as an agent for the common affairs of the bourgeoisie.

The truth about Bernie Sanders

Bernie Sanders has not done any of this. Despite his “socialist” rhetoric, it should be clear to leftists that he’s nothing more than a social democrat, championing the “Nordic-style” welfare state. It takes more than waving a socialist flag to be a socialist. During his lengthy career in the Senate, Sanders has advocated for universal health care, a minimum wage increase, and has denounced big corporations. These are fair demands, but they don’t make a socialist platform, much less a revolutionary program, especially if they are accompanied by his support of the war in Afghanistan, the occupation of both Iraq and Afghanistan and Israel’s criminal attack on Gaza . And this is not new; his unwavering support of US imperialism goes back to the bombing of Kosovo in 1999 .

If we mistake Sander’s song and dance for true socialism, we might as well take François Hollande, Rodriguez Zapatero and George Papandreu—three presidents who strove to maintain capitalist profits by thrusting austerity down workers’ throats— as socialist.
He’s been dubbed a de facto democrat, casting 98 per cent of his votes with the Democratic Party. His experience in the Vermont Senate belies his close collusion with the party; other Dems refrain from competing for the same seat and Sanders stays silent around the cuts on education, social services and lay-offs of state workers implemented by Governor Peter Shumlin.

The current debate among the left

Regardless, Bernie Sanders’ entrée onto the presidential stage has stirred excitement among left parties and individuals, some of which are quick to celebrate his candidacy, exaggerate his boldness and minimize his contradictions. However, being an honest politician is not enough to fight against capitalism.

When considering the Socialist Alternative’s call to build a “third party,” we ask, “What kind of party do we need?” Definitely not the kind in which workers co-exist with representatives of the corporate class and advocates of US imperialism. Green Party’s Howie Hawkins, whose program for NY state does not denounce capitalism even once , is no solution to the rule of capital.

The question is not whether Sanders can pull the Democratic Party to the left, as Jacobin magazine editor Bhaskar Sunkara argues . We know the Democratic Party can co-opt and incorporate progressive movements, stripping off their disruptive potential. It has done it many times.

The examples of Jesse Jackson and Dennis Kucinich, among many others, show that any attempt to shift the politics of the Democratic Party to the left will only serve to whitewash an organization that is profoundly undemocratic and steered by representatives of the 1 percent. Already promising to throw his weight behind the future democratic candidate if he loses the primaries, the most Sanders will accomplish is sheepdogging a left base into the democratic corral.

There is great confusion that mistakenly attributes a kind of trickle-down power to “progressive ideas” from above. This illusion has fostered a mushrooming of activists and progressives who think that Sanders will revive and amplify left and popular movements. As Danny Katch points out , the people who sympathize with socialism and outraged black communities from Ferguson to Baltimore are already present and mobilizing. Sanders has not facilitated any of these individuals or movements. In fact, he has expressed sympathy for police officers (“Being a cop is a very, very difficult job”), before any solidarity with protesters. It would be an understatement to say that any socialist organization both flirting with Bernie Sanders and seeking the support of black workers is off track.

Kshama Sawants’ successful campaign in 2013 demonstrated that there is a space for socialist candidates. Her strong link to the fight for a $15 minimum wage, along with her demands for affordable housing and an end to layoffs, education cuts and police brutality made up a working class platform. Her decision to earn an average wage and donate the rest to grassroots struggles was a powerful way to show working-class solidarity.
The support given now to Bernie Sanders is a terrible mistake. The endorsement of his presidential bid by the business newspaper Bloomberg View should be taken as a warning. Ashley Smith’s piece published in SocialistWorker.org lays out an accurate critique of Sanders’ political career, but fails to point out the fatal limitations of his cross-class politics.

Despite the evident differences, it might be useful to take a look at the experience of a successful electoral campaign in South America. The Left and Workers’ Front in Argentina (Frente de Izquierda y los Trabajadores, FIT)– ran in the 2013 elections without abandoning their revolutionary perspective . Over 1.2 million votes granted the FIT a total of 3 seats in National Congress and many more in local legislatures. All of the FIT congressmen earn the same income as a skilled worker or a teacher, using the rest of their salary to support workers’ struggles. Furthermore, a bill presented by MP Nicolás del Caño proposed that ‘all Members of Parliament earn as much as a teacher’ , revealing the privileged character of a political caste at the service of the capitalist class. All three parties constituting the FIT have insertion in the working class and are therefore directly accountable to their bases. MP Christian Castillo presented a bill to expropriate Donnelley’s plant in Buenos Aires, a factory that is under workers’ control since August 2014 . The shop-floor committee (comisión interna) in this factory is almost entirely made up of militants and members of the FIT.

Sander’s social democratic politics do nothing but inspire trust in capitalist institutions. He can only develop electoral politics. He’s not based in any grassroots movement, has no organic links to the working class, and provides no revolutionary perspective. So please, don’t breed any more illusions in his candidacy among the left and the workers.
There is momentum for independent working-class politics in the US. The Black Lives Matter movement, the disillusionment of immigrant workers and other social sectors with Obama’s unfulfilled promises, the incipient awakening of precarious workers struggles –such as Fight for Fifteen and OUR Walmart— are all phenomena with which a working-class campaign should try to converge. Such a bid could draw militancy from these movements while at the same time foster them and advance their demands.

For the construction of an anti-capitalist workers’ front, it is paramount to put forward a working-class perspective in the coming elections. This could be a very small, but significant step towards rebuilding the U.S. left.

* Juan Cruz Ferre, member of the FT-CI, holds an M.P.P. from Johns Hopkins University and is a columnist for La Izquierda Diario,