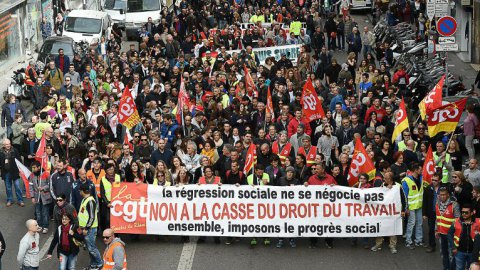 This is a translation of an article originally published in Révolution Permanente.

Despite heavy rains, brutal police repression, and the government’s attempts to demoralize the strikers, more than 1.2 million students and workers struck and marched with resolution throughout the country to demand the immediate withdrawal of the planned reforms.

Strikes in the public and private sectors disrupted transportation as well as production. But for this “tous ensemble” – that is, the uniting of forces in the streets – to successfully push back the already weakened Hollande-Valls government, it will take more than a few leapfrog days of demonstrations. Only the indefinite strike actions in schools, universities and workplaces will be able to beat this government that is at the service of big business.

Neither the administrative closings of over twenty Parisian high schools, nor the employers’ lock-outs at certain workplaces, nor the brutal police repression of students these past few days succeeded in demoralizing the protestors.

Police crack down on protesters

In Paris, more than 160,000 people marched in the rain from Place d’Italie in the southern 13th arrondissement to the Place de la Nation in the eastern 12th arrondissement. The leaders of France’s main trade unions and student unions – Philippe Martinez for the General Confederation of Labor (CGT), Bernadette Groison for the Fédération Syndicale Unitaire (FSU), Jean-Claude Mailly for Workers’ Force (FO), and William Martinet for the National Union of Students of France (UNEF) – marched at the head of the demonstration.

In Normandy, 50,000 demonstrators took to the streets, while Le Havre and Rouen were blocked by strike action. In Bordeaux, Lyon, and Rennes, 30 000 protesters took to the streets, and some even faced heavy police repression. In Toulouse, the demonstration reached historic proportions, with over 100,000 participants. In Marseille, the trade unions claim over 120,000 strikers.

Youth at the forefront, despite repression and governmental maneuvers

Among the youth, high school students once again took the lead. In the Parisian region, despite the organized lock-outs, at least fifty secondary schools were blocked – partially or entirely – from the early morning on. In Paris, high schools that had not been on strike before joined the mobilization. After the violent beating of a 15-year old student by a police officer in Paris last week, student strikes in the schools of working-class neighborhoods were heavily supervised by police. Throughout France, over 250 establishments were blocked or on strike according to reports by high school student unions.

In other parts of the country, students blocked access to a dozen campuses in order to force the cancelation of classes and allow everyone to participate in the protests.

University students were also strongly mobilized. For the striking students , yesterday was the fourth national demonstration since March 9 and the first time dissenter trade union leadership called for mass worker strike action alongside the students. In most of the marches, notably in Paris, they were located in the main cortege. Among them, the students of the historically left-wing University of Saint Denis (University of Paris 8) and the students of the Sorbonne had a notable presence.

Video: Protesters at Saint Denis chant, “The capitalists are screwed! The youth are on the streets!”

In other parts of the country, students blocked access to a dozen campuses in order to force the cancelation of classes and allow everyone to participate in the protests. At the University of Poitiers, the level of protest obliged the university’s governing bodies to suspend roll calls for the remainder of the semester.

An explosive link-up between striking workers and youth

For the first time since March 9, workers also took massively to the streets. Encouraged by the growing student movement, the workers made a thunderous entrance, once again demonstrating their combativeness and desire to fight to the finish. Slowed down by their trade union leadership, which did not call for a strike on March 17 or 24, yesterday’s national “interprofessional strike” realized the junction between the youth and workers that every government fears.

For the Philippe Martinez, general secretary of the CGT, “The mobilization was very strong and exceeded our own expectations.” Several strategic sectors of the economy were on strike that day. The majority of factories within the French automobile multinational, PSA Peugeot Citroen, were on strike, despite management’s lock-outs and strike-breaking actions. In Le Havre and Rouen, the port workers totally blocked the city and converged with the youth. Strike action heavily disrupted production, transportation, and administrative work.

Encouraged by the growing student movement, the workers made a thunderous entrance, once again demonstrating their combativeness and desire to fight to the finish.

In the transportation sector, workers of the national rail, Parisian metro and Air France all went on strike, slowing train and air travel. Major sectors of civil service were also on strike. Strikes at the Eiffel Tower even shut it down for the day.

While the movement becomes more and more massive among youth and workers, French President François Hollande and Prime Minister Manuel Valls are finding themselves in the hot seat. Facing the pressure of growing anger over government policies, earlier in the week they were forced drop the proposal to constitutionalize the state of emergency as well as the controversial measure concerning citizenship disenfranchisement.

According to last week’s polls, if presidential elections were held today, François Hollande would not make it past the first round and would obtain only 14 to 16 percent of the vote against all potential right-wing opposing candidates. His popularity rating, not 15 percent, has dropped from staggering highs after the January and November terrorist attacks.

Now is not the time to negotiate, but to renew strike action!

Despite the success of yesterday’s demonstrations and the government’s apparent weakness, trade union leadership is now digging its heals in. The press statement issued Thursday night by labor and student unions clearly demonstrates this. In the statement, they “confirm their availability to meet the government and to propose new rights concerning employment, working conditions, professional training and workers’ right” – showing that they are still open to negotiate and engage with the government’s age-old “social dialogue.”

And though it is imperative to strike while the iron’s hot and call for renewed strike action across the country, the union organizations have not even proposed the bare minimum in terms of perspectives: a new day of demonstrations on April 5 is being organized by the national student coordination. However, the inter-union proposes to use that Tuesday to “question members of Parliament” –another gesture of opening the door to future negotiations. Furthermore, they are calling on workers to strike and march on April 9 – a Saturday!

Despite the success of yesterday’s demonstrations and the government’s apparent weakness, trade union leadership is now digging its heals in.

The government has lost much credibility and could very well be forced to abandon its proposed labor reforms. A member of Hollande’s Socialist Party even went as far as saying, “At this stage of the game, we cannot seriously rule out a scenario in which the government falls.” It is not the moment to dig one’s heels in.

Starting today, workers and students, organized in general assemblies, must impose a rapid and unlimited renewal of strike action against the labor reform in the days and weeks to come. This is also the best way to win “new rights,” starting with an end to precarious working conditions, stable jobs for all, a reduction of working hours, and a living wage truly indexed on inflation.