The Intersections of Anti Blackness and Anti Communism 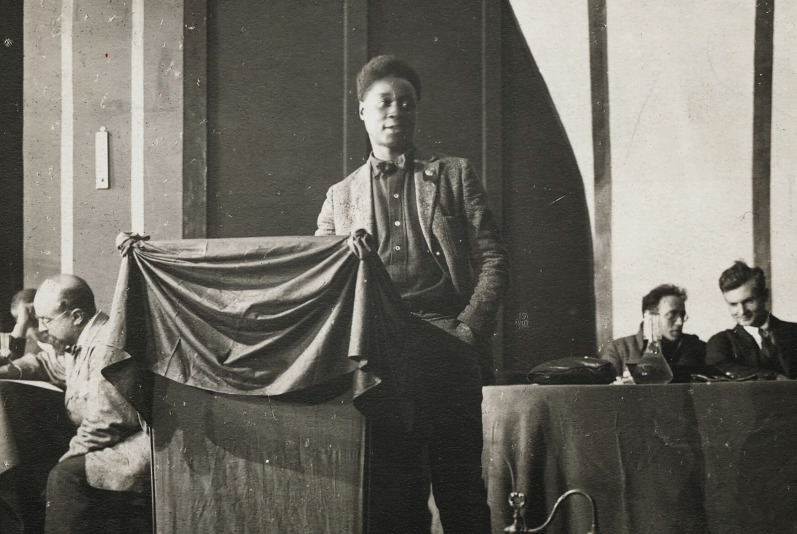 Image from [African Words- https://africainwords.com/2016/12/25/cfp-the-red-and-the-black-the-russian-revolution-and-the-black-atlantic-14-15-october-2017-lancashire-deadline-31-january-2017/]. Claude McKay addressing the Fourth Congress of the Comintern, Moscow in 1922.

Charisse Burden Stelly is an assistant professor of Africana Studies and Political Science at Carleton College. Her areas of specialization are Black Radical Politics, African Diaspora Theory, and Globalization and Economic Development.

How do you think of the relationship between Black political movements, radical movements, and Communist movements historically? Which bits of overlap are promising to you?

Radicalism and Blackness are intimately linked. At various times, around the 1930s and 1950s, for example,there were major convergences around housing, civil rights, and due process. For instance, cases like the Scottsboro Boys and Angelo Herndon won important legal concessions with respect to due process and fair jury selection.

The Angelo Herndon case was in the early 1930s. He was a Black Communist arrested for contravening the Burgen Laws in Alabama. Because he was a member of the Communist party, many Communist lawyers mobilized around his case. Angelo Herndon was accused of inciting a riot or using incendiary speech because he was educating people on communism. His case really represents one of the kind of earlier convergence on free speech, civil liberties, and civil rights. He’s a figure where anti-Blackness, antiradicalism, and anticommunism converge.

The International Labor Defense, a communist organization, helped win the struggle for fair jury selection in the Scottsboro Case. This is because the causes were linked: people like William Patterson, Claudia Jones, and Paul Robeson struggled for equal rights for Black folk but also struggled for free speech for Communists and Socialists who were being heavily surveilled and subject to state discipline and violence.

Although in a dominant communist approach race is subsumed to class, there were actual moments where race became an important question for Communists. During debates surrounding the “Black Belt thesis,” starting in 1928, whether or not Blacks in the Southern United States constituted a nation was given central stage in the Comintern because Communists and socialists were trying to understand the role of the Black working class in revolutionary struggle. Both Black radicalism and Communism were struggling for forms of redistribution pending revolution, against forms of anti-Black violence and subjection, and for an alternative world and political formation that was more just and allowed the people that create value to have control and possession over the value they create.

What do you see as the connection between anti-communist, anti-radical, and anti-Black political forces historically?

Globally, I think anti-Black and anticommunist forces converged around anticolonial, anti-imperial, and internationalist struggle, especially after WWII. The Bandung Conference helped begin the Non-Aligned Movement, and the Tricontinental Conference hosted by Castro in Cuba included global revolutionary state and nonstate actors involved in anticolonial struggle. Both of these gatherings were surveilled and condemned by the global capitalist power structure.

During World War I fear of Pro-Germanism preceded fear of pro-Bolshevism. The United States was very wary of Germans using Black people to turn against the US state. The Bureau of Investigation (which became the FBI) began to surveil Black publications. From the language we see in the anticommunist documents of these groups, we can see that the underlying assumption of these investigations was that Black people can’t think for themselves and are inherently subversive, which means foreign actors can just come in and manipulate Black people into uncritically following their cause. The thought was that Black people don’t contribute anything to ideology or world history, rendering them manipulable and susceptible to subversion.

Globally or domestically, the convergence is that Black people are always-already dangerous and have the capacity for sedition, like radicals, who want to redistribute wealth and upend the social relations of the United States and the world order. Then, the ways in which Blacks and radicals were disciplined began to mutually inform one another.

In my research, I track this mutually informative relationship by calling antiblackness and antiradicalism interaction metaphors. I borrow this term from Nancy Stepan Leys. For instance, the techniques of circumscription of movement first employed to defend the institution of slavery (requiring Black people to carry papers) now used against radicals (withholding their passport, visa denial, politically motivated deportation). Both of these groups are on the constitutive outside of the State and so both are otherized or “niggerized” in particular ways. It reaches its apotheosis with respect to Communism during the Cold War.

Based on your historical insights, how would you characterize the state of Black politics today? Who do you see as the factions, the problems, and how to move forward?

The main movement right now is Black Lives Matter. I think it is “left-liberalism” – if you look at many of their solutions, they are lobbying the State for rights and recognition in particular ways. That’s not my politics. Of course, Jay-Z’s new album 4:44 just dropped and people are looking to Jay for the answers on viable Black capitalism even though we’ve already established that that shit’s not gonna happen.

I think there are also some more grassroots localized movements. Many people are pointing to Chokwe Lumumba’s election as a culmination of forces, starting by getting his dad in the mayor’s office and also on the city council. This seems to be a confluence of left and nationalist interests for placemaking and place keeping.

We fucked up out here. We need all hands on deck. People need to be doing something. Even if I don’t agree with the ideological justification that doesn’t mean it is irrelevant. Caribbean philosopher Paget Henry talks about this current historical climate as an opening. I think there is an opening but we are still collectively in a place of learning and understanding. At least I am.

In my opinion, very little in current Black politics has articulated a national and international vision that is about actually creating a better world. I don’t have any solutions, I’m still trying to understand the problem. But I think it has to be a combination of localized struggles on living and surviving. Many of the things in circulation that people think are critiques of capital are not actually critiques of capitalism: they are criticisms of what they see to be particular malformations of capital, like racial or gender disparities in outcomes, but not capitalism as such. They basically concede that it is okay for many people to be poor or abject so long as its equal across the board (with respect to identity groups other identity groups). The latter is an argument that Adolph Reed, Preston H. Smith, and others make.

There’s a groundswell of movement and mobilization. I am not sure if there’s sustained organization yet – there’s mobilization and then there’s organization. I’m also not sure what end organization would serve if it happened: I’m critical of identity politics and ways of mobilizing around what Stuart Hall calls “new ethnicities.” The efforts become segmented and disjointed. It’s very hard to identify what the movement will be, since things are so siloed.

But that sounds too pessimistic – I do believe that a new world is possible and that the people here now will be integral to that. But I’m not certain that we’ve seized the moment as of yet. But we still have time.

Some argue that the real push for Black Studies came from cultural nationalists and the Black Arts movement. I think it has taken on the functions of those. But I think the drive for Black Studies, or more relevant education, came from actual communities and a Black and Pan-African internationalist ethos. Folks wanted to go to the universities to gain relevant skills to go back and uplift their communities in material and also socio-cultural ways.

American Studies and Area Studies were actually the first interdisciplinary programs. These programs were meant to reproduce the American nation in particular ways and understand America as having contributed to civilization. They made use of history and literature at the outset and later an anthropological understanding of culture.

The grammar and the form of those interdisciplines was inherited by Black Studies once it drove towards legitimation and institutionalization within the American academy. Culture became a safe site of radicalism within Black Studies, challenging the civilization narrative that Blacks had contributed nothing and challenging the idea that Blacks have no capacity for reason and rationality. Black Studies is really over determined by cultural studies, literature, and by history.

The very language that most Black scholars doing political economy use – socioeconomics vs. class exploitation – is not analytically useful, getting at descriptive sociology that doesn’t clarify relationships to modes of production. It’s not just political economy. These terms have become ubiquitous. We need Marxist political economy specifically. Class struggle, conflict, exploitation, and surplus value: these terms and the analytic approaches that use them best capture what the Black political condition has been historically for those racialized as Black in the United States but also the relationship of nation to nation. I do appreciate world systems analysis, which is not traditionally a part of orthodox Marxism, but I also do believe in class conflict and believe that internal class conflict drives history in a particular way.

The contradiction between the influence of American and area studies, Cold War institutionalization, and particular kinds of accommodations and concessions made by racialized persons at that historical moment given the exigencies of American empire, largely explain why Black Studies turned out the way that it did. But, also, there was an influx of people who are not from the United States who came into Black Studies, which shaped its trajectory. The taking up of diaspora as an analytic instead of Black internationalism, is a result of these forces. Black British Cultural Studies, all the “posts” (structuralism, colonialism), and Black feminism have a strong hold in Black Studies in ways that drove the discipline forward in some ways but needs to be revisited and interrogated.

Black Studies is in crisis and has been for quite some time. We need to ask ourselves whether it’s a space for people to study Black shit – whatever that may be – or whether we want to be relevant to the exigencies of Blackness, to folks who are only getting worse off in structural material terms even as Black youth culture has proliferated as a global culture. Certainly the abstraction of cultural reality from structural reality, can’t be liberatory. We need to train people differently.