Some of the caravans of more than 13,000 migrants are waiting in camps in Tijuana, and others are making their way to the border. A new migrant caravan has already been announced, but the Mexican government is adhering to the United States’ mandates like a servile army as they punish the migrants and treat them as criminals with detentions and deportations. 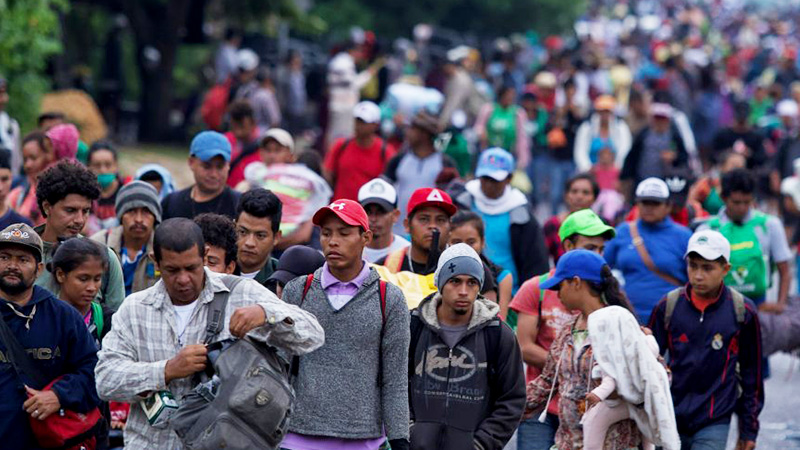 From the beginning, the migrant caravan highlighted the precarious economic and social conditions faced by thousands of workers in their countries of origin. It has also exposed the terrible conditions of the trek through Mexico which were exacerbated by the policies of former Mexican President Felipe Calderón and are continued by current President Enrique Peña Nieto. The asylum seekers, whether traveling in large groups or alone, experience cold, hunger, harassment, persecution, detention and the systematic violation of human rights.

The National Institute of Migration (INM) of Mexico executes this policy in part through detention centers. 59 Mexican detention centers operate throughout the country, located principally in the states of Chiapas, Veracruz and Oaxaca, where migrants are denied basic rights such as access to communication. Case information is limited and legal defense representation is not offered. There are isolation rooms and “punishment rooms” where migration agents resort to threats.

This disregard for human rights was evident in the first images of the migrant caravan in Mexico. The world watched as the Mexican government brutally repressed the asylum seekers at the Mexican border on October 19. Hundreds of Central American migrants who had entered the country were tear gassed, and some were sent to detention centers to be deported.
Central American migration to Mexico rose dramatically from the mid-1990s through 2005, when between 390,000 and 500,000 migrants reached the country. According to Mexico’s Migration Statistics, provided by the Ministry of the Interior, from 2006 to 2009, there was a pronounced drop of about 70 percent. By 2012, there was a rebound in the flow of migrants by at least 40 percent.

From 2009 to 2014, the population from the Northern Triangle region, which includes Guatemala, El Salvador and Honduras, constituted 91 percent to 93 percent of all the people detained by Mexico’s migration authorities. In 2014 the Mexican government stepped up deportations after the increased arrival of “unaccompanied minors” and families coming from Central America. These migrants, primarily on their way to the U.S., were detained and deported in Mexico at the behest of the U.S. government. In 2015, 165,524 Central Americans were detained and deported from Mexico, while 75,342 were reported from the US, according to the Migration Policy Institute (MPI).

The current Central American exodus is also part of an unprecedented phenomenon, not only in Mexico but in recent history, in which millions of workers are migrating to the principal imperialist countries. According to the 2017 International Report on Migrations from the United Nations, the number of migrants has increased by 49 percent since 2013, reaching 258 million worldwide. In imperialist countries, a renewed xenophobic right has emerged, embodied by Donald Trump in the U.S.

Central American migration to Mexico and the United States is driven by extreme poverty, social inequality and violence generated by criminal groups, which have been sustained by the governments of the Central American isthmus.

In the wake of a series of natural disasters in the region—like Hurricane Stan in 1998 and the Haitian earthquake in 2010—Salvadorans, Hondurans and Nicaraguans became eligible for Temporary Protected Status (TPS), which offered work authorization and provisional protection against deportation.
Central America is characterized by growing social inequality, political crises, and governments that serve U.S. imperialism, which continues to renew and deepen its dominance over Mexico and Central America.

The most emblematic case exposing these conditions was the 2009 coup in Honduras which occurred at the behest of the U.S. and Latin American ruling classes and favored the imposition of a rightward political turn throughout the region. The coup was a response to the social demands of the population as the economy was facing not only a cycle of recession, but the application of adjustment and austerity packages to the popular masses, peasants and workers.

If in the first half of the 20th century U.S. imperialism installed its domination with the formation of the so-called Banana Empire using the United Fruit Company in countries like Honduras[2]. This dominion continues under free trade agreements between the United States, Mexico and Central America from the 1990s, with the objective of facilitating economic “cooperation”; with liberalization, financial cooperation, development of Central American exportables, cooperation in the primary sector, energy supply and promotion of investments.

It was under the government of President George W. Bush that a new commercial and political strategy was initiated in the region with the signing of the Dominican Republic-Central American Free Trade Agreement (DR-CAFTA) in 2004. This agreement made way for a new process of trade liberalization in Central America with an emphasis on the region’s relationship with the United States, its main investor.

Fourteen years after DR-CAFTA’s approval, the process of commercial integration has enriched the national bourgeoisie while guaranteeing foreign direct investment and exploiting natural resources and cheap labor. For the workers, this has meant instability in labor, social insecurity and precarious living conditions, which, together with violence and attacks on human rights, have led to the current wave of migration.

The United States’ response to the problems caused by DR-CAFTA has been the Alliance for Prosperity Plan, in which the United States committed $750 million as part of a strategy to regulate and control the passage of migrants at the border. This was undertaken simultaneously with the Southern Border Plan, approved in 2014 by President Peña Nieto and Guatemala’s then-president, Otto Perez Molina.

These programs have increased border controls and accelerated deportation processes for Central American citizens arriving in Mexico (an increase of 130% in arrests from 2013 to 2015 and an increase of 124% in deportations), in addition to the growing militarization of the border between Mexico and Guatemala with financial, technological, and military aid from the United States. [3]

A Spiral of Violence for Migrants

The year 2010—during President Calderón’s term—registered as the most violent year in Mexico. In August, 72 migrants were killed by organized crime in collusion with different parts of the Mexican government. A year after the massacre in San Fernando, Tamaulipas, horror returned to the region when 43 secret graves were found at the same border point with almost 200 bodies, most of them Central American migrants.

Both Mexican authorities and organized crime groups, which saw migrants as merchandize from which they could profit, have unleashed massive amounts of violence with kidnappings, extortion, forced labor and killings. According to the National Human Rights commission itself, on average, 20,000 people a year experience this.

But the violence does not cease. The super-exploitation of labor at the lands of the principal chambers of business has opened the doors for the current wave of migrants from Central America, which now numbers around 13,000 people crossing through the country to Tijuana. This situation has been exploited by the employers in the north; it was the case with Cuban and Haitian migration, which saw a considerable boom in Mexico after the earthquake in Haiti in 2010 and after the thawing of diplomatic relations between Cuba and the United States. Labor exploitation, starvation wages and the violation of rights is the only thing that the business owners of the Business Coordinating Council (CCE), the Secretary of Labor and Social Security (STPS) of Baja California, and the authorities at the INM can offer.

Moreover, demonstrations of racism against migrants are encouraged by the employer class, which will try to divide the exploited and oppressed and pit them against each other. And even though the migrant community is distinguished by a certain identity, a certain culture, and certain experiences and beliefs, it is also true that from the point of view of the labor market, the economy puts us all on the labor market to compete.

International Solidarity and an Anti-Imperialist Program

The migrant caravan, which defies the immigration policies of Donald Trump, is an expression of the years of pillage, exploitation and capitalist policy that have been imposed by the White House on Central America through international organizations like the International Monetary Fund and the World Bank.

If capitalism sees in the migrant an inexhaustible source of exploitation for its profits, the working people must overcome whatever “difference” is imposed on them by the capitalist class. The imprint of capitalism on migration is clear in the exodus in Mexico; it appears in the economic crisis imposed on the Venezuelan people who flee to Brazil, where Trump’s xenophobic rhetoric is almost manifested in Jair Bolsonaro’s rise to government; it is also the political and social crisis in Nicaragua, which causes thousands to flee to Costa Rica as a result of Daniel Ortega’s repressive policies.

The phrase “no human being is illegal” has to materialize in a powerful social alliance promoting solidarity across sectors of the working class, since those who migrate are workers, poor peasants and their families, small merchants displaced by capitalist voracity and plunder. They are brothers and sisters of the working class, of indigenous communities.

They are women and young people who, as in Mexico, face displacement in rural areas due to drug trafficking crime and mega-development and transnational corporations, due as well to the consequences of the “war on drugs” and militarization. In this alliance, the working class of Mexico and the United States must play a fundamental role, making the demands of the migrants their own and struggling to achieve them, through a perspective of worker and popular unity beyond the walls that the bourgeoisie puts up.

While the Mexican state and parties at the business owners’ service show their class character by denying migrants dignified conditions in their passage through Mexico, international worker solidarity must manifest itself on both sides of the border with active encouragement from social groups, unions and human rights organizations in order to demonstrate active support for Central American migrants and avert any repressive measures on the part of the Mexican state and the racist and xenophobic government of Donald Trump. The demands “full political and social rights for all” and “no human being is illegal” must abound from both sides of the border.