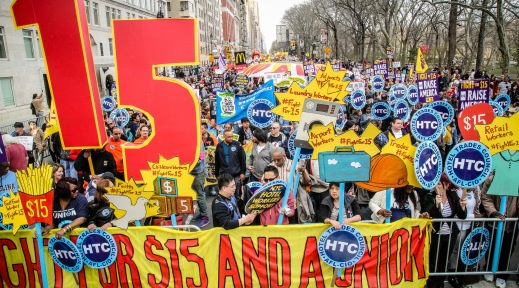 The US has been seen as a country with a weak labor movement. However recent strikes by fast food workers and the $15 minimum wage movement have attracted attention. What’s your take on those movements? Are these struggles reflecting an objective and/or subjective change going on in the US labor movement?

Clearly, what has become known as the “Fight for $15,” waged primarily by fast food workers is a welcome development for the US labor movement. Inspired by Occupy Wall Street in the autumn of 2011, we have seen workers at various fast food chains mobilizing their supporters from unions and progressive organizations and engaging in one-day job actions and civil disobedience in business and tourist districts across the US. These workers are among the poorest and more precarious sections of the US working class, disproportionately women, immigrants and other people of color.

However, there are two important reasons to doubt whether this new wave of worker activism will change the relationship of forces between capital and labor in the US. First is the strategy of the main union behind these mobilization—the Service Employees International Union (SEIU). While the SEIU is one of the few unions that has increased its total membership in the 21st century, it remains one of the most bureaucratic and undemocratic unions in the US—one that is thoroughly committed to labor-management cooperation at the workplace and beyond. Much of their growth is the result of “organizing the employers”—offering employers contracts with sub-standard wages, benefits and work rules in exchange for the right to collect dues. In many SEIU organized hospitals and commercial buildings there are no shop stewards—workers with grievances are encouraged to use “call centers” hundreds of miles away to make their complaints and “wait patiently” for their union to respond.

Faced with more militant and democratic unions in the health care industry, the SEIU has turned to the “organization” of fast food workers to stem the stagnation and decline of their membership and attempt to influence the “political narrative” through a modest increase in the minimum wage. As a result, the SEIU acts more like a Non-Governmental Organization (NGO) promoting street theatre than a union building workplace power.

The realities of the SEIU led “Fast Food Forward” and “Fight for $15” campaigns point to a second factor limiting the impact of these struggles—these workers lack the social power to win and change the relationship of forces by themselves. Fast food work is some of the most de-skilled work in world. The ability of workers at a single store—or even several stores—to impact production and profitability is minimal. Put simply, this industry will not be organized on a store-by-store basis.

Can the fast food industry—and the giant ‘big-box’ retailers like Wal-Mart—be organized? They can, but not in the way the SEIU is attempting to organize fast food or the United Food and Commercial Workers (UFCW) is attempting to organize Wal-Mart. A store-by-store strategy that produces little other than symbolic “strikes” will not succeed when workers in these sites have so little social power. Instead, the key is the organization of the supply-chains for fast food and the new retail stores.

There is an ongoing debate worldwide whether precarious workers such as those working in the fast food industry should be considered part of the working class or if they should be treated as something else, part of a “precariat” or a new subject. Do you think this new category is useful?

The notion of the “precariat” as a social category with interests different from the rest of the working class is both empirically and theoretically problematic. First, it greatly exaggerates the degree to which a growing number of workers are in insecure and temporary jobs, often part-time and sometimes for employment agencies and other ‘non-traditional’ employers.

Contrary to what many believe, about 90% of all employed people in the US work in traditional employer-employee arrangements, with 83% of those in full-time work. US Bureau of Labour Statistics surveys done in 1995 and 2005 both showed that those working in ‘alternative arrangements’, such as independent contractors or temporary agency workers, consistently compose about 10% of the workforce. While the number of those working through ‘employment services’ soared from 1,512,000 in 1990 to 3,849,000 in 2000, by 2010 their number had fallen to 2,717,000, a drop of 1,132,000. Even if those in non-traditional jobs increase significantly as employers seek to expand production without taking on permanent hires, they are certain to remain a distinct minority. [1]

Kevin Doogan has done an extensive cross-national study of employment in the European Union (EU) and has come to similar conclusions. [2] The number of part-time workers has increased markedly in the past thirty years across Europe, in particular in the health-care industry and large-scale retail firms. However, most of these workers do not move from job to job every few weeks or months. Rather most of these workers remain with the same firm for years. Managers in these industries want the advantage of part-time employees, including fewer benefits, combined with the ability to regularly schedule work in their firms.

You have researched and compared the present situation of that workforce with historical data in the US and UK. How unique and unprecedented is this situation of pervasive “precariousness”, if we frame the phenomenon in a historical perspective?

Historically, “precarity” has been the norm for the bulk of wage workers in the industrialized capitalist world for most of the past two centuries. Except for the exceptional “golden age” between 1945 and 1975, most workers in Japan, the US, Canada and capitalist Europe suffered from insecure employment, fluctuating hours and shifts and the like. Theoretically, this should be no surprise. As Marx argued in Capital nearly 150 years ago, capitalist accumulation, with its relentless mechanization of production and concentration and centralization of capital constantly reproduces a reserve army of labor of unemployed, under employed and precariously employed workers. Contrary to the theory of a distinct “precariat” with interests opposed to the stably employed working class—and the bankrupt theory of the ‘labor aristocracy’ [3] —the ‘privileges” of the regularly employed do not come at the ‘expense’ of the precarious. Instead, the growth of a growing layer of part-time workers with little job security sharpens competition among workers and produces a downward spiral of wages and working conditions for all workers.

The reason the notion of a ‘precariat’ has such resonance today is that the successful capitalist offensive against labor globally since the late 1970s—neo-liberalism—has made all workers more precarious. The weakening of unions, the dismantling of state regulation of the labor market and the decimation of social welfare benefits have made employment more insecure and the consequences of unemployment much more severe across the capitalist world. Put simply, neo-liberalism has returned the working class to its typical condition under capitalism—precarity.

Given the present situation of the workforce in the US and many countries where various objective and subjective changes have occurred, do you think this situation demands a new strategic and tactical reassessment from the revolutionary socialist left?

The current weakness of the workers’ movements globally are, in my opinion, not the result of “sociological” changes—neither the emergence of a “precariat” nor the notion that “globalization” has effectively “de-industrialized” the former centers of capital accumulation, nor the claim that technology as ‘de-materialized’ production. [4] Instead, the roots are found in a sharp shift in the relationship of class forces, especially since the late 1970s, and the political and ideological reorganization of the working class.

As most Marxist understand, working class struggle—and working class consciousness—is necessarily uneven. In periods of upsurge, in particular periods of mass strikes, masses of workers enter the battle with capital and the state creating the conditions for radicalism in the class. However, the separation of workers from the means of subsistence means that workers cannot be on strike continuously and all mass upsurges end. In the downturn of the class struggle, only a minority of workers remain active. On the one hand, some become full-time officials of the organizations created at the height of the struggle—unions and political parties. Put simply, they become the labor officialdom—the social basis of reformism in the workers movement. The majority of active workers attempt to “continue the struggle by others means”—strikes over working conditions, political demonstrations and actions, and the like. This ‘militant minority’—the workers’ vanguard—historically was the mass audience for revolutionary politics before the Second World War, providing the social basis for revolutionary syndicalism, the left-wing of social democracy and the early Communist Parties.

The Communist Party’s turn to the strategy of the popular front after 1935 not only marked their programmatic abandonment of revolutionary politics, but effectively disorganized the workers’ vanguard. Communist Parties across the world ceased being organizations of working class militants who organized independently of and, when necessary, in opposition to the labor officialdom. They became, instead, recruiting grounds for new layers of trade union and party bureaucrats.

When capital went on the offensive in the late 1970s, the labor officialdom—social-democratic, Communist or “non-ideological” (most US labor bureaucrats)—was incapable of organizing a militant fightback. Unlike previous capitalist offensives, there was no militant minority well rooted in workplaces and working class communities who could pose strategic and tactical alternatives. As a result, working class retreat in the late 1970s turned into the rout of the next forty years—creating the workers’ movement profound level of disorganization we face today.

For the revolutionary socialist left, this situation means that there is no simple and easy task to rebuilding the workers’ movement or a mass revolutionary party in the working class. We need to pursue two goals simultaneously—educating those workers who have become militants in revolutionary politics, and actively rebuilding the ‘militant minority’ around a politics of militancy, solidarity, democracy and political independence from capital. [5]