There is Money for the Olympics, but not for Education

Students in Rio de Janiero are taking to the streets to fight for quality education and in support of the teachers strikes. The dire conditions of public schools and the lack of investment in education contrasts with the vast spending on the 2016 Rio Olympics. 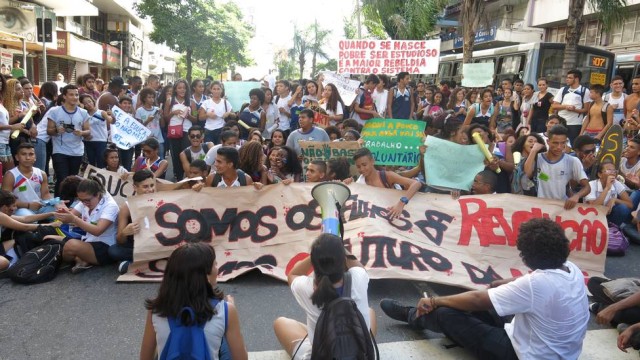 Working class high school students often have a reputation for behaving poorly in class and for not caring about their education. Yet, in Brazil, students have not only shown that they care about their education, but everyday they are taking the streets to fight for quality public schools. Currently, in Rio de Janiero, a teachers’ strike has been accompanied by nearly daily student protests in support of their teachers.

Conditions of Brazilian Public Schools
The conditions of Brazilian public schools vary from poor to appalling–overcrowded, run-down buildings and a lack of resources are trademarks. Reynan Perriera, a student at Visconde de Cairu, a high school in Rio de Janeiro says, “There are sixty students in my class. We have to squeeze into a small classroom and sometimes, kids have to sit in the hall to attend class.” At Cairu, a chemistry lab has been closed for repairs for years. At Mina Gerais School, located in the impoverished city of Caixias next to Rio de Janiero, the building floods every time it rains and students are given crackers for lunch.

Ariel Santos, a student at Cairu, says “When my sister was taking the exam to get into college, people in my family told her, ‘College is not for poor people like us.’ I want to be a doctor, but every day, my school and the government tells me, ‘No Ariel. You are not allowed to dream.’ My school hasn’t had a math teacher for months. How am I supposed to be doctor if I don’t have a science lab or math class? I look around my school and I see that my family is right: at every turn, the government says college is not for people like me.”

“There is money for the Olympics, but not for education”
The vast inequalities of semi-colonial capitalism are particularly evident in Rio de Janeiro, home to the 2016 Summer Olympics. The city has gone through innovations and public works to make the city olympic friendly, including an increase in police presence, a new (and very costly) museum, and mass displacement to make room for olympic construction. The state government even voted to subsidize the company that provides electricity to the city in order to have generators for the Olympics, providing them 85 million reais. This from the same government that claims there is no money for public education expenditure.

Teachers Strike
The Rio de Janeiro teacher strike began on March 2 due to cuts to education spending. The teachers are striking for a raise in salary and against the increase in mandatory individual contributions to pensions. They are also protesting because many — including Rio teachers — have not yet been paid their 13th salary, the extra salary that most workers receive in December. They are demanding that all principals be elected to their positions.

Seventy percent of all teachers in Rio de Janiero are engaging in the strike and teachers’ assemblies are packed with several thousand.

Public school teacher Ronaldo Filho says, “This strike is different because most teachers are adhering to the strike and the students are supporting us. This is helping our strike strengthen…. Also, this strike has been essential in helping teachers see themselves as workers who need to unite. The hope is that we will be win some advances.”

Students take the streets
Every day, there are small protests organized and led by students in different neighborhoods in Rio de Janeiro. There have also been mass protests involving thousands of students and teachers who have blocked streets for hours, with students chanting, “Teachers are my friends. Mess with them, you mess with me!”

Student Julia Gomes says, “We’re waking up up to the fact that the government has made a mess of education and we have gotten to the point that no person of conscience can stand it. We understand what teachers go through to teach us in such horrible conditions. Teachers need good working conditions so they can put forth the best of their abilities to give me and my classmates a better future.”

On March 21, the school Mendes de Morais was occupied by students seeking smaller class sizes and better conditions for the school, such as air conditioning units in classrooms. On March 28, yet another school was occupied, with additional demands, like more philosophy and sociology classes. ****

Following Sao Paulo’s example
The tactic of occupations was a trademark of the Chilean Winter of 2011. At the end of last year, high school students in São Paulo put up a strong fight against the governor and the school closings. The governor, who defeated strikes by teachers and metro workers was forced to retreat from his plan by a bunch of 16 year olds.

Will Rio be like Sao Paulo?
Students in Sao Paulo have shown the way for how to put up a fight and win. Student Rafael said, “If the government sees us as rebels without a cause, they are mistaken. We will fight until the end for our rights and for our teachers rights.It’s our right to to demand from the government, and if they don’t give us what we ask, united teachers and students will force them to give it to us.”

Students in Rio are showing that they will no longer accept these education conditions, and some students are pointing to larger questioning of the capitalist system. Walkyria Viera said,“The fight for education comes up against the barrier of the system we live in- which exists for the well being of the rich, who monopolize the media. We have to fight against this system too.”

**UPDATE: As of April 4, there are 8 schools occupied in Rio.