Economic conditions affect health. In fact, economic conditions can kill. This idea is nothing new in itself–we have known about it for centuries. Engels’ The Conditions of the Working Class (1845) has already showed us this (see Figure below, drawn from data in Engels’ work). 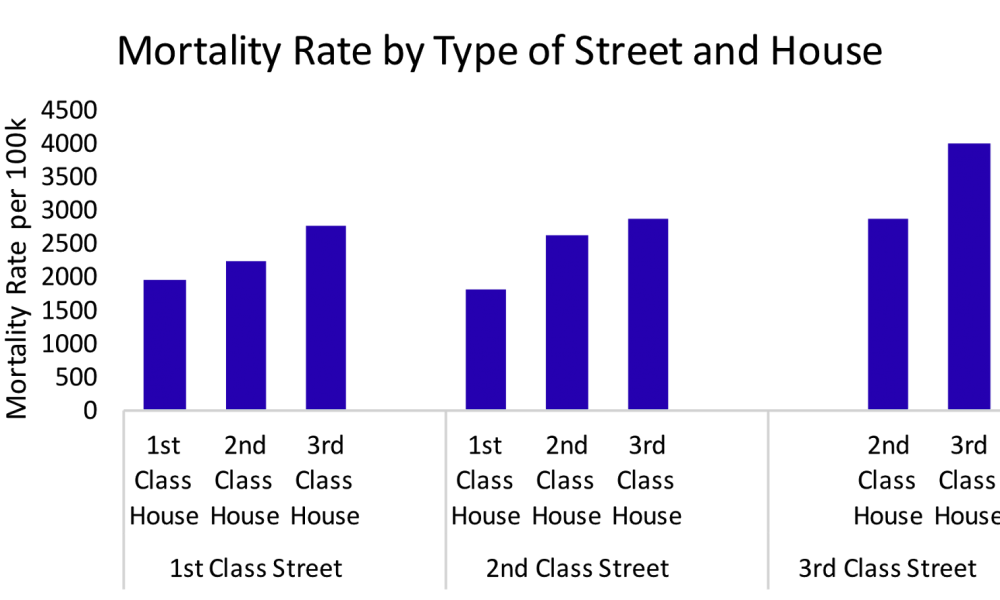 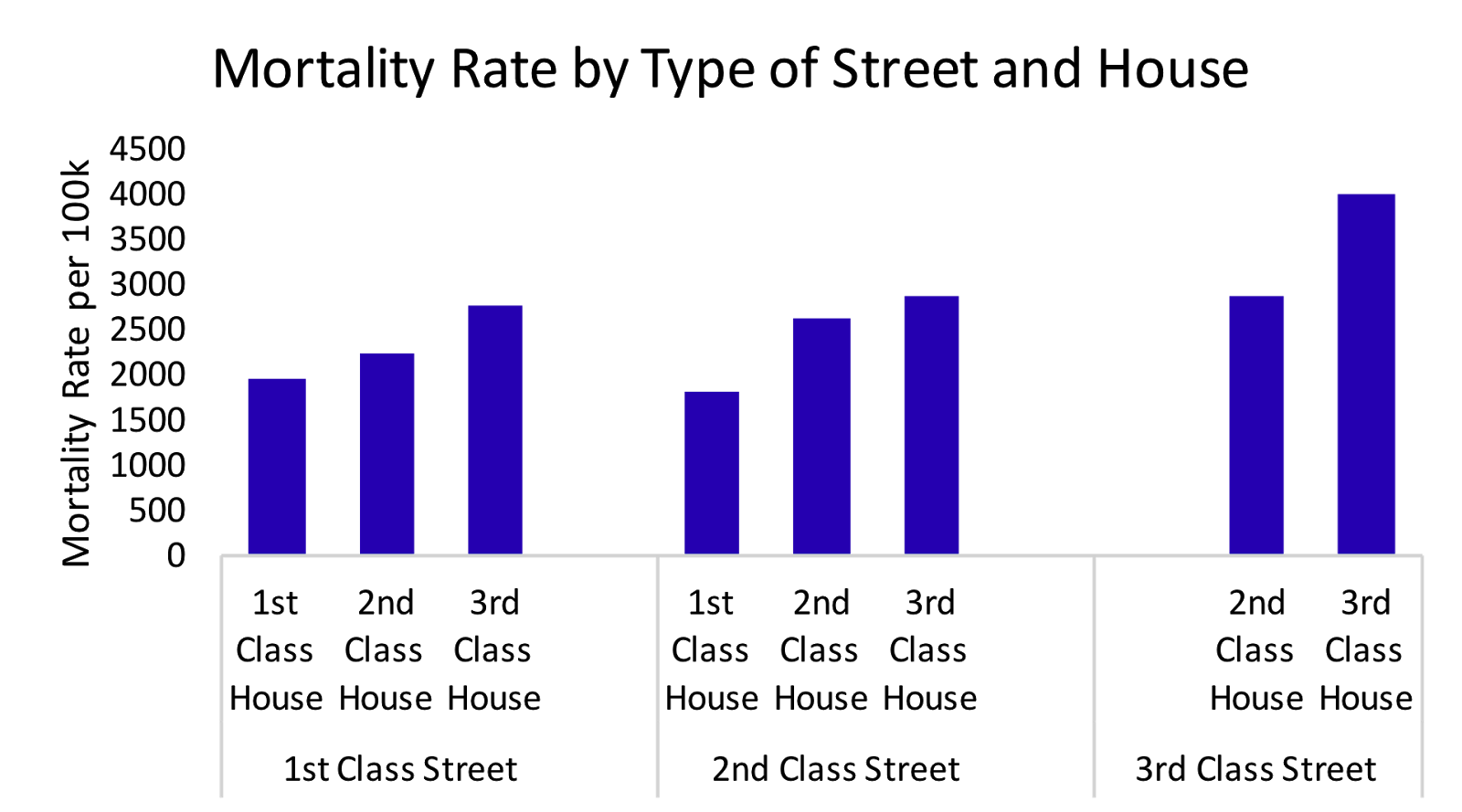 More recently, a large collaborative study published in The Lancet hit the news. The authors, in a more sophisticated way than Engels, showed that people in “low socioeconomic status” occupations (lower clerical, services and sales workers, skilled workers, and semi-skilled and unskilled workers) lost an average of 2.1 years of life expectancy between ages 40 and 85. The authors of the study went on to say that his loss of life expectancy due to occupational class is stronger than the effects of some of the well known “evils” of public health, such as high alcohol intake, obesity or hypertension. Much has been discussed about the relationship between social class and health over the last few decades, from many angles. The works of Carles Muntaner, Joan Benach or Vincenc Navarro introduce a clear political angle on this type of research.

The story of the effect of economic factors on health is not restricted to individual circumstances. Regardless of individual economic statuses and trajectories, there is a clear connection between contextual economic circumstances and health. That is, regardless of whether an individual loses her job or not, the current state of the economy has an effect on her health. This effect is counter to the usual intuition: as the economy grows (in the short-term), mortality tends to increase. This finding has been replicated in many Western economies in the last few decades.

For example, a study by Tapia-Granados and others found that both losing one’s job or living through times of economic growth is associated with an increased risk of mortality. This paradox is intriguing, as a characteristic feature of economic growth is usually the creation of jobs and decreased unemployment. A second study, conducted in Spain, showed how these links between growth and increased mortality (or between recessions and decreased mortality) are stronger in people of lower socioeconomic position (as approximated by certain markers like manual labor or lack of car ownership). In essence, this means that the working class suffers the consequences of the economic growth it has created and barely benefited from. The purpose of this essay is to introduce (or rescue) a specific theory behind these phenomena.

The Killing Machine of Capitalism

This mode of production generates growth by making sure that commodities are produced and then consumed. This is what Marx described as the productive consumption of commodities in the second book of Capital, along with the idea of the MCM’ cycle. The MCM’ (Money (M) – Commodities (C) – Money + Surplus (M’)) cycle is what we believe is behind the health-harming effects of economic growth. The core idea (see Figure below) is that one of the key cycles of circulation of money in capitalism is through the conversion of Money (capital) to Commodities (with the use of labor force and means of production), which are then exchanged for Money and a surplus (used to produce more commodities and reap profits).

This process requires an accelerated turnover of commodities, as they lack exchange value unless they are sold for money. Hence the term productive consumption of commodities: to produce, one must consume (commodities). A number of these commodities are health-harming, at least under capitalistic modes of production (e.g., tobacco, excessive alcohol, abuse of certain other legal or penalized drugs). Moreover, the production system generates some outputs that are also by themselves health-harming (e.g., air pollution, toxic wastes).

The hypothesized consequences of this cycle on health are clear: if growth generates more health-harming commodities or outputs, then growth will kill. It is important to make sure we remain at a collective level in our inferences: we are not talking about the individual conditions of each person, but rather the contextual conditions that generate health (or death).

In a recent study (published in the International Journal of Epidemiology, freely available archived version here) we tested a hypothesis that was derived from the theory above. In particular, we thought of potential mechanisms that could buffer people from the capitalistic mode of production (and subsequent consumption). One that we could think of and that had the benefit of being readily measurable were public social protection measures. These measures include, for example, unemployment benefits, active labor policies, disability and retirement pensions, and housing programs. In essence, think of any governmental program that redistributes wealth and has mandatory participation.

Our interpretation of the results is that countries with higher social protection expenditure might be able to protect people from some of the consequences of economic growth and recessions. A country with better unemployment policies (benefits, active training) or public pensions (not linked to the market) would see a lower degree of “swing” in health outcomes between the economic environment people live in during a recession or during a period of growth. In other words, people would be cushioned from the contextual economic environment. This would diminish the consequences of both economic growth and recession periods, by reducing the exposure of people to the social and economic system they live in. It is important to bear in mind that we cannot rule out that other factors that may contribute to mortality in these countries. For example, countries with increasing social protection expenditures may also have a different economic inequality profile, worker protection laws or consumer regulations.

One of the central tenets of capitalism is that growth is good and desirable. The de-growth literature has emphasized the potentially catastrophic consequences of unhinged growth on the environment. But, are all “economic growths” born equal? Would economic growth caused by growth in education services, health care, dependent care or science and research also trigger increases in mortality? Our research seems to show that countries that grow while increasing their social safety net seem to avoid these increases in mortality.