A Letter to my Undocumented Mother

A young Mexican writes a letter to her immigrant mother living and working in the United States. She talks about her path from hating her mother for leaving her to understanding her. She now fights so that no one will go through the loss and exploitation imposed by capitalism and imperialism. 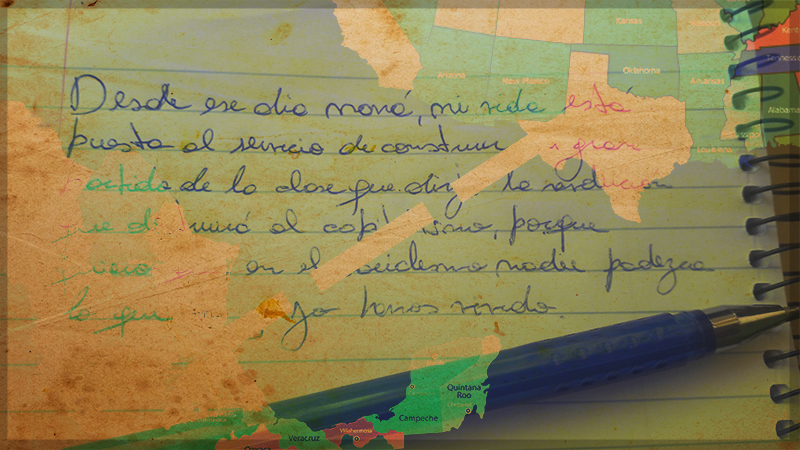 When I was a kid, I always wondered why I didn’t know you. Why were you in another country? Did you love me? Why could we only talk over the phone? At 16, I realized that the answer to all these questions had to do with a capitalist system based on the exploitation. Since that day, I have been struggling to change this society at its roots.

I remember living with my grandparents, my brother and other family members in a rented “house.” The roof was made of sheet metal. Every time it rained, water would pour in and we had to use buckets to catch the water so we wouldn’t get soaked. But what scared me most was the landlady, who would show up on the the day before rent was due and scream at us that she wanted her money. Whenever we passed her, she would tell us not to forget to pay the rent. I was sick with worry. I thought that she would kick us out and throw us into the street.

But you always sent the money on time.

We never lacked food, clothes, toys, shoes, candy or education. When I asked why you were living in the United States, everyone told me me that it was to buy a house, in which each of us could have a separate room. They told me that that would be very difficult in Mexico because of the devaluation of the peso. I didn’t understand this at the time because I was only a child.

Even so, I did understand that we needed to buy a house–and I always thought that you too were scared of the landlady.

At school, I always had a hard time with other children. They would ask ask me: Where is your mom? I told them that you were working in the United States, and said: What does she look like? This is the part that was hard. I had never seen a picture of you. I told them, honestly, that I didn’t know what you looked like. They told me that I had no mom or dad, and that you left because you didn’t love me. Their mothers would ask where you were. When I told them, they’d tell me, “A good mother never abandons her children.”

I grew up with this huge anger inside and I started to hate you. I couldn’t stand Mother’s Day celebrations. They reminded me that you were away, and I felt alone. I knew that my grandparents would not leave me, but they weren’t you. The people at school all made me believe that you were not a “good mom.”

When you returned to Mexico, you managed to buy the house. You opened a store. I remember how grandmother cried, saying “She promised me to be back in December of that year, but stayed for six years.”

You came back when I was nine years old and we did not get along well. The image of “the good mother” was engraved in my head, and my anger was enormous.Whenever I think about the things I said to you back then, something breaks inside of me. I had been led to believe that you did not love me, that a good mother would never leave her children.

The shop’s business floundered. You borrowed money to make sure that we had everything we needed. I knew about all the loans; I watched your anxiety grow and grow each day. When it finally came to a head, you decided to return to the “American Dream” because you wanted me to have money and time to study. You always told me that I was very smart. Your decision to return to the United States when I was 12 fueled my anger even more. To me, it was confirmation that you never loved me. You left, and you also had a room built for me so that I could study better and get into a good school.

I managed to get into the College of Sciences and Humanities. (Translator’s note: This is one of the most elite public Colleges in Mexico City). I was disoriented among much wealthier students. I began thinking that I belonged to a class which I did not in fact belong to. I was able to believe that because you always gave me everything, even if that meant more debt. At the school, I joined a political group, where people talked about exploitation and said that the world had to change. They said that there was a parasitic class living at the expense of workers. I was very enthusiastic, but told them that for me things had always been fine. So they assigned me a task: I had to ask you how many hours you worked each day.

When we spoke on the phone you told me that you worked a total of 14 hours and that before, you used to work 16. You worked two jobs just to make enough. If there was work on your day off, you would accept it because that meant more money. On that day, I understood everything: You had not gone away because you did not love me. You were away, suffering all of that, simply because you loved us very much. You endured a great deal in the United States to give us the best.

The American dream is not a dream; it’s a nightmare.

You crossed the border through the mountains twice. You were chased by a helicopter, and you had border patrol hot on your heels. You arrived in a country where you did not speak the language, and you are exploited every single day. You are not entitled to employee benefits, you work with forged documents, you live with the constant fear of being deported and you are discriminated against. When you get sick you don’t go to the doctor because it’s too expensive; you make do with take home remedies and go to work anyway.

The American dream is not a dream, Mom; it’s the worst nightmare. It has stolen your life, taken away our chance to celebrate birthdays together, to hug each other, to live together. We have been away from each other for 19 years, and these capitalists exploit you every single day. You tell me that on some days you cannot move your hands because they’re so tired.

They made you believe that you were illegal, and therefore, had to accept everything without complaint. They keep you in fear of losing your job and getting deported. You continue to hope for the immigration reform that Obama had proposed and Hillary Clinton now promises. They manipulate your dreams, they use you like a bargaining chip, because their imperialism works through the labor of millions of migrants like you. Don’t give up. You’re so brave, enduring all of this! All so that I can get a university degree and never suffer what you go through every day.

Mom, when I finally understood this and when I learned about your life, everything changed. I know that I’m not the only person who suffers from not having her mother by her side; we are millions and counting. The American dream is the worst nightmare, but it’s worse for you because you are a woman and a single mother. You are burdened with the weight of having two children and always trying to offer them the best.

The US government constantly threatens you. They want to build higher and higher walls to keep you out of their territory. But they never say that their millions in profits are made possible by millions of migrants working under conditions of semi-slavery.

We are forced to live this way and there is only one culprit: capitalism, this ferocious system of exploitation. It works only because millions of workers like you make it work. You are the ones who move the world with the sweat of your brows and who are forced to dedicate your lives to the production line.

Only you, all the workers of the world, can put an end to this system, because you are the working class. Don’t let anyone make you believe that you are illegal and deserve what you are going through because you are uneducated or a woman. You deserve to be happy and to have a full life.

At school, they told us about the heroes of the Mexican homeland-great personalities of history. They wanted us to be like them–but I want to be like you, Mom. Because you can change the world, because the working class is the class which will lead the revolution that will put an end to this system and to the miseries we live through.

At 16, I came to understand you and everything you went through. Now I fight within the Socialist Workers Movement (Movimiento de Trabajadores Socialistas). Although I know that you don’t appreciate much the way I live, you must understand that when one knows that 1% lives in luxury and abundance whereas us, the 99%, survive on miserable wages, life cannot be the same anymore.

Since that day, mom, my life has been dedicated to building a large, working class party to lead the revolution to destroy capitalism. I do not want future generations to suffer what you and I have lived through.

Although the path is not an easy one, I know that this system must cease to exist.

Thank you for being the greatest inspiration in my life. If my desire to fight is strengthened every day, it is because your life is the greatest example of struggle that I know of.