The latest eruptions of violence in the West Bank and Jerusalem did not appear out of nowhere. They have been slowly brewing in the colonialist policies of Israel, reinforced by Netanyahu. 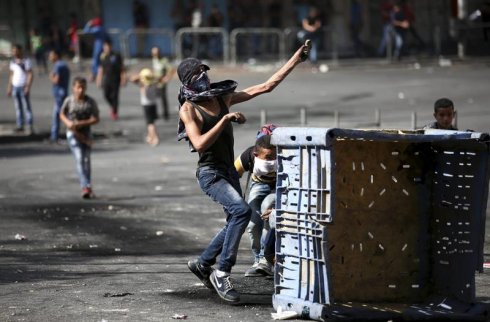 This is a translation of an article originally published in La Izquierda Diario on October 7, 2015.

It is unclear whether a new organized resistance movement will be born, on the scale of the previous intifadas of 1988 and 2000. But it is evident that the conflict between Israel and the Palestinians is entering a new stage.

These latest clashes began a week ago, after the death of four Israelis in two different attacks allegedly perpetrated by Hamas and the Islamic Jihad.

The Israeli government responded by unveiling its new defense policy, recently approved in September. The “War on Stone Throwers” championed by Prime Minister Netanyahu will allow the use of live ammunition to repress demonstrations and carry sentences of up to four years of prison for anyone caught throwing rocks, the emblematic action of the Palestine rebellion against the occupation.

Netanyahu has forbidden Palestinians access to the Old City and arrested five Palestinians being held responsible for the attacks and accused of forming part of a Hamas cell. In an action typical of colonial forces, he ordered the demolition of homes belonging to two alleged “terrorists” — a symbolic and “exemplary” punishment.

Considering that Netanyahu’s policies can be summed up as an intention to crush the people of Palestine, one can say that the Israeli repression has yet to reach its ceiling.

To this, one must add the settlers’ attacks that have targeted Palestinian homes, olive groves and even ambulances and hospitals. In one of the most shocking attacks, a house was set on fire in Duma, West Bank in which three people died, including an 18-month old baby.

Settlers continue to exert pressure in the streets– just last Monday, they marched to Netanyahu’s home in Jerusalem to demand the expansion of the settlements– and from inside the governing coalition, where they are heavily represented. .

The Israeli government’s harsh response was met by a wave of demonstrations led mostly by youth to protest the refugee camps, checkpoints and settlements. The repression of these actions left at least two young Palestinians dead and hundreds of people injured, many of them by firearms.

An unavoidable question is whether or not we are approaching a new wave of Palestinian rebellion, a “Third Intifada” centered in the West Bank and Jerusalem. The past year, this has been a subject of discussion in the media as well as within intelligence agencies of Israeli and Palestinian Government. Although the intensity and level of violence remain far below those of previous Intifadas, it can be said that we have before us a mountain of dry hay, with many sparks to potentially spark the fire.

According to a survey conducted in Gaza and the West Bank between September 17 and 19 by the Palestinian Centre for Policy and Survey Research, the Palestinian president’s popularity is at an all-time low, as are expectations for a successful negotiation.

The numbers are telling. Sixty-five percent want Abbas to step down. If elections were held today, Former Prime Minister Ismail Haniyeh would likely defeat Abbas. Two-thirds of those surveyed think that the PA is not doing enough to protect Palestinian cities from settler terrorist attacks and that they would volunteer for civil guards to patrol affected areas.

In the face of an inviable peace process, 57 percent support an armed Intifada, 51 percent are against a two-state solution, and 42 percent think that the most effective way to establish a Palestinian state is through armed rebellion, against the 29 percent that prefers a diplomatic solution.

Many factors can explain Abbas’ and Fatah’s fall in popularity, along with the Palestinian Authority’s loss of legitimacy. Firstly, Abbas assumed the presidency as a pawn for Israel and the U.S. government. Abbas’ announcement at the U.N. that the Palestinians would be pulling out of the Oslo Accords was a moot point since the Oslo Accords have been effectively buried for years. His announcement failed to help him regain credibility, as did his threats of abandoning the cooperation agreement with the Israeli State on security matters.

To make matters worse, there is rampant corruption in the PA within a context of rapidly deteriorating living conditions for the majority of Palestinians, particularly in the West Bank under siege by Israel.

It might be wrong to expect a renewed version of the previous Intifadas. The clashes in the West Bank and Jerusalem demonstrate the new geographic configuration of the Palestinian territories, the political weakness of the Palestinian national movement’s traditional political leadership, and how these elements are shaping the character of the resistance.

The expansion of Israeli settlements changed the landscape. Palestinian cities are fragmented and isolated by walls, fences, checkpoints, military bases and settler-only roads. The region has not only felt the weight of rupture between the PLO and Hamas, but is also affected by the increasingly radical organizations and largely autonomous local leaders.

There are almost daily confrontations, with Palestinians and settlers living in close proximity, the ongoing “judaization” of Jerusalem, and the presence of a government coalition controlled by a zionist, ultra right-wing. Violent confrontations are no longer exclusively taking place in big mobilizations, but now occur in smaller groups of youth or even individuals. Any incident carries with it the potential to light the match.

It may prove to be possible to contain the movement with Netanyahu’s repressive forces and Abbas’ collaboration, but the situation has reached a boiling point.

This is also bad news for the United States, Israel’s main ally. Obama and Netanyahu have had disagreements over the Iran deal, which has led Netanyahu to seek out other alliances, including even Russia, to avoid problems in Syria and particularly the Golan Heights.

As if the crisis in Syria, the persistence of the Islamic State, the military intervention of Russia, the deteriorating military situation in Afghanistan weren’t enough, the intensification of the conflict between Israel and the Palestinians adds a new element to the already chaotic Middle East political landscape.