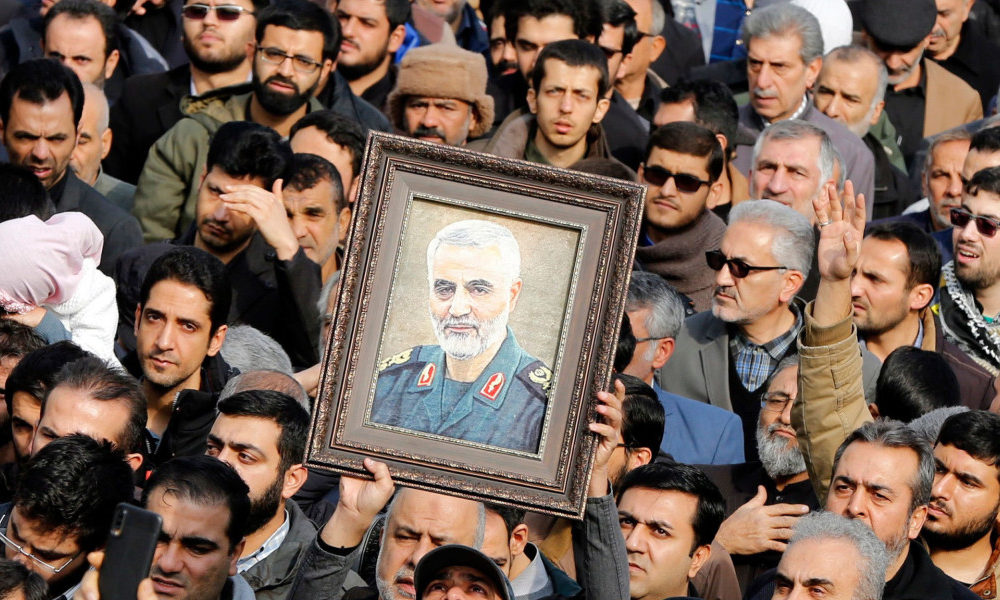 In a move that threatens to further destabilise the region, U.S. forces assassinated top Iranian military officer, General Qasem Soleimani in Iraq on Friday. Soleimani, a powerful and respected leader within Iran, had played an active role in several conflicts across the Middle East from Afghanistan to Iraq and Syria. His assassination is yet another escalation of the ongoing conflict between The United States and Iran and their respective proxy forces in the region.

The most recent round of escalations began last weekend when U.S. forces bombed five positions of a pro-Iranian militia in Iraq and Syria. In response, the U.S. embassy in Iraq was attacked on Tuesday by pro-Iranian militiamen, who set fire to the compound. The assassination by drone bombing of Soleimani and a commander of the Iraqi pro-Iranian Popular Mobilization Forces (Hashd al Shaabi) followed on Friday morning. This brutal response (an act of war in and of itself) not only threatens a further escalation of the conflict, but risks igniting a hot war between The United States and Iran. Indeed, in a show of further escalation and aggression, officials announced on Friday that an additional 3,000 troops were being deployed to Iraq.

The bombing, which was applauded by Israeli Prime Minister Benjamin Netanyahu, has otherwise been widely condemned by many world leaders, and the U.N. has said the attack was most likely a violation of international law.

For their part, Iranian officials have made it clear that there will be a response. On Friday, President Hassan Rouhani vowed that “Iran will take revenge for this heinous crime,” and Iran’s Ayatollah Ali Khamenei said that “a forceful revenge awaits the criminals who have his blood and the blood of the other martyrs last night on their hands.”

Such a response however could lead Iran into a devastating war. The most likely (although not the only option) is that Tehran will attack a neighbor-ally of The United States (Israel or Saudi Arabia). It is clear that for The United States it was a risky maneuver but one that at the same time allowed them to have control over the “game.” If Iran does not respond to the challenge it will be a defeat with no doubt important implications for the regime. If it responds in kind, however, it will mean opening the risk of a war worse than in Syria and possibly as fatal for the regime. In these conditions, the only ones who can decide on an even more dramatic “non-escalation” are The United States. But for that, they need a victory, that is to say that any response from the Iranians has to be less than proportional.

These events, of courses are not unfolding within a vacuum. Even as the threat of war looms, major social protests are sweeping over Iraq, Lebanon, and Iran, calling into question Iranian regional policy. Since the end of October rejection of the Iraqi regime and of Iranian influence in the country has increased, even as Iran has seen political unrest within its own borders grow. This imperialist offensive and the Iranian responses will no doubt change the situation.  Iran will try (and perhaps succeed) to build national unity in the face of this aggression.

The workers, the youth, and all the exploited and oppressed peoples throughout the world must condemn this act of imperialist aggression against Iran and demand an immediate withdrawal of all U.S. forces from the region. Such a condemnation of course should not and must not in any way imply any political support for the reactionary Iranian regime which does not hesitate to assassinate the exploited and oppressed in Iran and the region. As the example of the North American invasion of Iraq in 2003 demonstrated, the working classes and the popular classes of the world have nothing to gain from such imperialist wars except further oppression, exploitation, and austerity.

This piece is an adaptation of an article written by Phillipe Alcoy originally published in Revolution Permanente.