A tale of summits and storm surges

In February of this year, a historic peak was reached: The average concentration of atmospheric CO2 has exceeded the limit of 400ppm for the first time in at least the last 800,000 years, perhaps even the last 25 million. 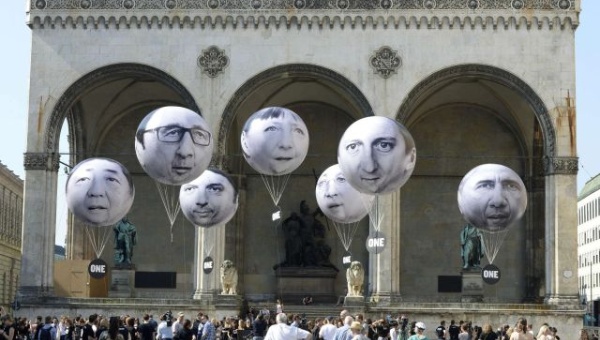 At the beginning of June, another summit negotiated about this issue in the Alps: the G7, an international commission of the ruling class. Shortly after the heads of governments proclaimed the goal of ending the era of fossil fuels by the end of this century, the coal lobby in Germany was again able to impose its interests. Which answer to the ecological crisis does the working class need?

Man made climate change is not a mirage – increasing extreme weather phenomena, massive soil degradation, water shortage and much more are real threats. They effect people in very uneven ways; the most exploited and oppressed the hardest. In the name of overcoming poverty, under the yoke of imperialism, the dependent countries follow upon the destructive development path of the capitalist centers. Despite slight signs of the possibility of reaching a turning point, global greenhouse gas (GHG) emissions keep rising.

Based on scientific scenarios of the IPCC, the “international community” has decided to limit global warming to +2°C [1] in the year 2050 compared to pre-industrial levels. This is the supposed threshold to irreversible chain reactions: Positive feedback loops may cause a self-perpetuating dynamic by which a gradual change quickly turns into a volatile one. One of these so called tipping points is the melting of the Greenland ice sheet.

Without a fundamental reversal of this trend, the earth – staggering from one tipping point to the next – might heat up as much as five or even six degrees celsius compared to pre-industrial levels. In the worst case the Amazon could burn down completely, the whole of the Tropics and the Subtropics could become inhabitable, a massive shortage of water and food could occur and the acidified oceans could rise several meters because of the melting polar ice sheets – entire nations would be forced to flee. The planet would change beyond all recognition.

The G7 decided to abandon fossil fuels “in the course of the century” and announced their avowal of the 2 degree target. By the year 2050, GHG emissions should be limited to one third the level of 2010. But following the rules of this well-known game, these voluntary commitments don’t have any binding character. They are mostly seen as a signal for the UN climate summit in Paris (COP21) in December. Before the COP15 in Copenhagen in 2009, the G8 even decided to reduce GHG emissions by 80% in 2050 – the summit failed and the voluntary commitments evaporated.

From 2020 onwards, the dependent countries are to receive US$100 billion per year from public and private sources for climate protection, as well as so-called “climate insurances”. Export credits of the EU and the OECD, which until now mainly funded German coal power technology, shall now flow into renewable energies. Financing for this emerging sector is a sign of a changed relation of forces within the bourgeoisie – especially German capital profits from this sector as a strategic project of its imperialist expansion. But technologies such as Carbon Capture and Storage (CCS), fracking and nuclear energy are supposed to serve as safeguards for a centralized fossil energy supply system. All of this is going on in the context of the ongoing bleeding of the semi-colonial states. The goal of the imperialist powers is always the control over resources, among others things for the containment of Russia.

At least since the publication of the “Stern review” [2], large parts of the ruling class know about the enormous economic damages which unhindered anthropogenic climate change would cause. Therefore, the political standstill on this issue appears paradoxical. But the climate crisis is part of the overall ecological crisis of capitalism. Within this mode of production, it simply can’t be resolved. Competition, imperialist destruction, overproduction and waste are all effects of the same principle: infinite capital accumulation as an end in itself instead of production for the satisfaction of needs. This is the basis of the need for endless economic growth and the immanent cause of environmental destruction in capitalism.

What does the movement say?

While one part of the environmental movement still chases after ruling class projects like “ecological modernization” or the “Green New Deal”, the young “degrowth” movement has gained a lot of momentum and has seemingly emancipated itself from these projects. They attack growth as the central problem, but generally overlook the above-mentioned fundamental relationship between capital accumulation and endless growth. Progressive demands such as the shortening of the working day are therefore completely stripped of their class content. The program of “degrowth” lacks strategy and remains toothless [3]. The lack of a subject to transform society – apart from preaching individual solutions – leads to an intolerable “petitioner mentality”. The appeals to the rulers at the G7 summit go so far as to idealize them in climate super hero costumes. The campaigning network “Avaaz” with over 41 million people called the results of the summit a “GIGANTIC SUCCESS!”

The working class, in alliance with the poor peasants and other oppressed people, is the only social force which offers a way out of the ecological crisis. On the one hand, workers are the people most exposed to pollution and the destruction of their livelihoods. On the other hand, because of its position in the production process, only the working class has the material basis to radically reorganize production. This class must become aware of its immense task and lead the fight against the ecological crisis. Therefore it needs an own program, a truly international association and political independence from the bourgeoisie – including from bourgeois, social-chauvinist ”ecologists”.

In the fight for our living conditions, the peak of global GHG emissions must be reached within the next five years – an enormous but feasable challange. We need a transitional program that provides us with the desperately needed time to fight climate change.
And yet we don’t only have to confront the capitalists and their state, but also the reactionary tendencies and the leaderships within our own organizations. Especially the unions in traditional heavy industries often oppose necessary restructuring. In Germany, the recent dispute about the “climate charge” advocated by the economy minister Sigmar Gabriel (SPD) – which was supposed to make old coal-fired power plants unprofitable and therefore obsolete – ended with the coal lobby on top. This was likely only due to pressure by the perfidious leaderships of ver.di (the services union) and the IG BCE (the union for mining, energy and chemistry). This position within the unions is a result of the privileges of the bureaucracy with their nationalistic logic, especially in an imperialist country like Germany. The Result: 2,700 megawatts of power from lignite coal will be taken of the grid, but they will remain as a reserve and will be added to the existing over capacities.

This little reform of Gabriel would not have been enough, not by a long ways. In contrast to that, we as revolutionaries – also within the factories – need to demand a faster and more consistent closure of the lignite coal power plants. This demand is directly and inseparably linked to the fight for radically shortening the working day, with no loss of wages, and a democratically-planned redistribution of available work. Especially in sectors with a high ecological footprint there is a need to fight for an ecological in-plant restructuring, including closures if necessary. Further examples are the aviation sector, the auto industry or the meat industry.

At the same time, we build a bridge to the demand for workers’ control of all companies – if we can transform the bureaucratic apparatuses into fighting organizations, which, already within capitalist society, begin to realize a part of their future task of the democratic planning of the economy.

However only under socialism, in a worldwide planned economy based on the democracy of workers’ councils, can a complete ecological reorganization of production be implemented – an economy which is oriented towards satisfying the needs of the people. In the former capitalist centers, production needs to shrink heavily, partly possible due to rising productivity. Measures will include the quickest possible transition of the energy supply to state-of-the-art renewable and appropriate technology, the massive reduction of car production and private transport, the development of free public transportation systems at all levels, the ecological remodeling of cities, and the transition from energy-intensive petro-chemical agribusiness towards modern organic farming [4].
By burying the rule of the bourgeoisie, we will not only be able to prevent ecological collapse but we will also enter a new relationship with nature.

[1] The 2°C-goal is scientifically disputed. A rise to this temperature would aleady bring about severe effects, such as the danger of flooding of small island states. The alternative proposed also by the latter is a limit of +1,5°C.

[4] By building up humus, immense amounts of carbon can be retained permanently in the soils, which are severely endangered on a broad scale. This measure leads to many different positive effects, including the conservation of biodiversity.