“A Victory for Us Will Be a Victory for All Workers”: Interview with Chicago Teacher on the Brink of Strike

Teachers in Chicago are fighting against the city’s plans to force them back to in-person learning despite unsafe conditions. Left Voice spoke to one of the teachers in the middle of the struggle about their experience and why it is important that workers across the country support Chicago teachers in this struggle. 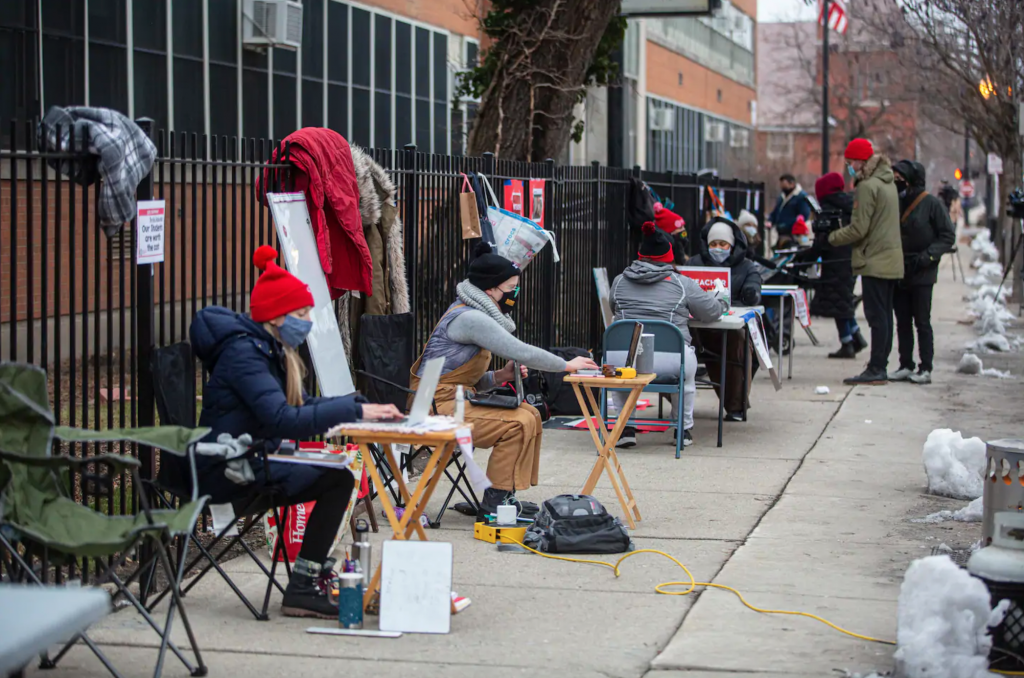 Refusing orders to return to work under unsafe conditions, Chicago teachers prepare their desks and laptops for a virtual class. (Image: Anthony Vazquez)

Like so many workers across the country, Chicago teachers are being pushed to prematurely and unsafely return to work. Using the smoke screen of the deleterious effects of remote learning on students, the Chicago Public School System and the Mayor’s office are trying to force teachers back into the classroom to keep other sectors of business open. Teachers within the Chicago Teachers Union (CTU) are pushing the union to fight the bosses and potentially go on strike. Left Voice speaks with a Chicago Teacher about their experience and why teachers need solidarity from workers across the country and the world to stand up for their rights and the well-being of their students and communities.

What has been happening with Chicago teachers, and how have things escalated in the past few weeks?

The Chicago Public Schools’ (CPS) leadership has not been bargaining with the Chicago Teachers Union (CTU) over a safe return. As a result the reopening plan is unsafe, inequitable, and incomplete. [The School System Administration] has been trying to divide us by staggering the times when teachers and staff are called back. Our clerks and tech coordinators were called back into buildings in the fall; pre-K and special education teachers on January 4; and K-8 teachers on Monday, January 25. Strategically, our union has waited until this week to take collective action. We voted to work from home on Monday, and we voted to authorize a strike if disciplinary action takes place.

Over 100 Local School Councils (our only democratically elected educational body) have passed resolutions against CPS’s reopening plan. Forty-two out of 50 aldermen have spoken against the plan. Our union has pressed CPS to delay reopening until there is an agreement. And yet our mayor and CPS leadership have dug in their heels.

What are you and the other teachers doing now?

I have stayed involved with the union and have taken part in some direct actions. For example, I was part of a teach-out outside the residence of the president of our unelected, school board appointed by the mayor. The locked-out teachers held a press conference, and we filmed ourselves delivering lessons that we would like to send to our students but have been blocked from doing. Along with about 500 other union members, we took part in a car caravan to demand safe reopening. Last Thursday, along with nine other teachers at my school, we held a teach-out outside our school building. We set up desks and computers and continued to teach. It has been very difficult to be threatened, punished, and prevented from seeing my students. But I am very grateful to have a strong union behind me and grateful that we are now taking collective action. We are standing up for the health of each other, our families, our students, and our communities.

What message do you have for the other teachers around the country who are facing similar situations?

Schools won’t function without their teachers. If you feel unsafe, get involved with your union and try to resist unsafe reopening plans. Many of us are being asked to make impossible decisions: risk our lives or risk our livelihoods. I know it is scary to risk losing pay and losing our jobs, but there is a certain point when we have to demand safety. Our job as teachers is to ensure the care of our students. If we are needlessly exposing them and their families to illness and death, how are we caring for them?

What message do you have for workers outside of education? Why is it important for them to support your struggle?

The pandemic has been a portal into the priorities of our society. It is all too clear that our society values profits over people. Politicians and bosses have called workers “essential,” and yet they are not paying them livable wages or offering them basic safety. The struggle that we are faced with in forcing a safe reopening plan is the same struggle that all workers face. A victory for us will be a victory for all workers. It will show the power of collectivity, organizing, and taking a stand.

[The area my school serves] is a culturally diverse community with many essential workers. I have students who have lost family members to Covid-19. An irresponsible reopening plan would impact essential workers and working families the most. Our union is taking collective action to push for a plan that doesn’t further marginalize working-class families or subject their children and communities to unsafe conditions.

Lori Lightfoot, the Democratic mayor of Chicago, has received a lot of praise for being a “progressive.” Can you talk about how this struggle, like so many others, shows that to be a lie?

Lightfoot has shown time and time again that representation is not enough. Throughout the pandemic she has favored profit over human life by prematurely opening restaurants and bars, which has only increased community spread. Lightfoot and CPS CEO Janice Jackson claim that their school-reopening plan must occur because of “equity.” But only 37 percent of CPS families selected the hybrid learning option. More than two-thirds of Black and Latinx families have elected to remain remote. Most of the families who have selected the hybrid option are white families that have more resources and fewer preexisting conditions. CPS’s reopening plan would have teachers teach our in-person students while simultaneously teaching students who have remained remote — all while wearing masks. The quality of instruction will be degraded, especially for remote learners. This is not an equitable or progressive plan.

The CTU has been one of the more militant teachers’ union and has gone on two major strikes in the past decade. How does that history empower teachers to fight now?

I think our members have been emboldened and empowered by the successes of our collective actions. I have been inspired to see many CTU rank-and-file members speaking out, planning direct action, and defying the boss to fight in solidarity for the rights of working people in Chicago. The fight is hard, and the deck is stacked against us, but one thing is certain: when we fight together, we win.

Is there anything else you’d like to tell our readers?

I have felt dehumanized and isolated by my employer, but I stand strong in my decision. I have seen firsthand the lies and smears by our mayor and CPS leadership, which are published uncritically by the dutiful corporate media. But I’ve also seen public opinion shift because of our union’s work . Although it sometimes seems hopeless because those in power have so many resources at their disposal, if we fight together, we can win.