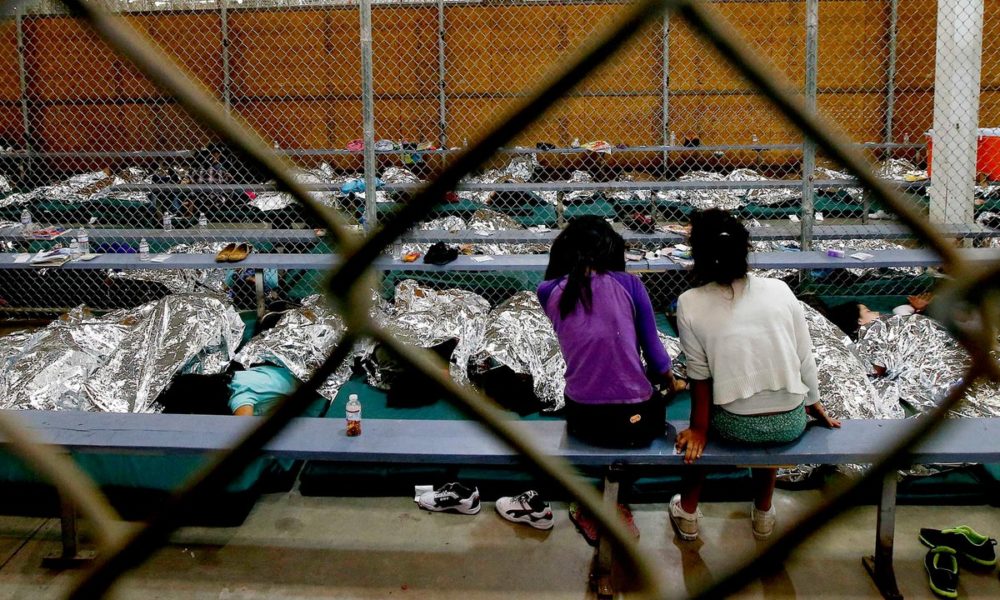 Immigrants at a detention center in Texas, June 2019.

Children are dying in concentration camps in the United States at its southern border. As a policy to deter migrants from entering the U.S., the Trump administration has separated thousands of  children from their families and put them in “detention centers” against their will. The conditions in the camps are intentionally inhumane, with the administration even going so far as to deprive children of soap, toothpaste or beds to sleep in. According to an interview with immigration lawyer Elora Mukherjee in The Atlantic,

“An overwhelming number of children who I interviewed had not had an opportunity for a stable shower or bath since crossing the border [days or weeks earlier]. They were wearing the same clothing that they had crossed the border in. Their clothing was covered in bodily fluids, including urine and breast milk for the teenage moms who are breastfeeding.

“Nearly every child I spoke with said that they were hungry because they’re being given insufficient food. The food at Clint is rationed on trays. Everyone gets an identical tray regardless of if you’re a 1-year-old, or you’re a 17-year-old, or a breastfeeding teenage mother who has higher caloric needs. The same food is served every single day, and none of the children receive any fruit and vegetables or any milk.”

There was an uproar recently when Rep. Alexandria Ocasio-Cortez explicitly called ICE detention centers “concentration camps,” echoing what leftists and immigration activists have been saying for months. In an Instagram video, Ocasio-Corez said, “I want to talk to the people that are concerned enough with humanity to say that ‘never again’ means something….The fact that concentration camps are now an institutionalized practice in the ‘Home of the Free’ is extraordinarily disturbing and we need to do something about it.” The uproar from the Right is predictable, with Liz Cheney — the daughter of a war criminal let it be noted — tweeting, “Please @AOC do us all a favor and spend just a few minutes learning some actual history. 6 million Jews were exterminated in the Holocaust. You demean their memory and disgrace yourself with comments like this.” Republican Rep. Dan Crenshaw tweeted, “Your comments reveal total disregard for our sovereignty & a deep ignorance that belittles the horrors of the Holocaust.”

Rep. Ocasio-Cortez later defended her use of the term “concentration camps” while distancing herself from outright comparisons to the Holocaust, “and for the shrieking Republicans who don’t know the difference: concentration camps are not the same as death camps. Concentration camps are considered by experts as ‘the mass detention of civilians without trial.’ And that’s exactly what this administration is doing.”

Since then, thousands of Jewish people have spoken up, confirming that these so-called detention centers are, in fact, concentration camps.

“a place where large numbers of people, especially political prisoners or members of persecuted minorities, are deliberately imprisoned in a relatively small area with inadequate facilities, sometimes to provide forced labor or to await mass execution. The term is most strongly associated with the several hundred camps established by the Nazis in Germany and occupied Europe in 1933–45, among the most infamous being Dachau, Belsen, and Auschwitz.”

Historians usually point to the first concentration camps as a British phenomenon in the Second Anglo-Boer War in South Africa from 1900-1902. The Anderson Prisoner Camp in Georgia, which held Union soldiers during the U.S. Civil War, could also be considered a type of concentration camp.

The mistreatment of migrants, however, is not something unique to the Trump administration. Going back to Ellis Island, immigrants were segregated in holding centers, often by visible sickness, but also by physical appearance and nation of origin. Every postwar Democratic and Republican administration from Eisenhower’s Operation Wetback through Bill Clinton’s Illegal Immigration Reform and Immigrant Responsibility Act of 1996 (a bill which set to limit the number of illegal immigrants living in the United States with expedited extradition proceedings) has targeted non-U.S. citizens for mistreatment.

The U.S. Immigration and Customs Enforcement (ICE) was founded in 2003 and has now operated through three different presidential administrations. While some progressive Democrats call to abolish ICE, even a cursory view of history demonstrates that the brutality against immigrants is not due to a single organization. It will not do any good to do as AOC suggests and replace ICE with another repressive entity. Repressive mechanisms against oppressed people are central to American history.

What Cheney and Crenshaw are either ignorant of or ignore, is that the Nazi practices of racial apartheid were based on U.S. models. In an interview with Bill Moyers, James Whitman, the author of “Hitler’s American Model: The United States and the Making of Nazi Race Law” states:

“American law, hard though it might be for us to accept it now, was a model for everybody in the early 20th century who was interested in creating a race-based order or race state. America was the leader in a whole variety of realms in racist law in the first part of that century. Some of this involved American immigration law, which was designed to exclude so-called “undesirable races” from immigration. In 1924 American immigration law in particular was praised by Hitler himself, in his book Mein Kampf.

But it wasn’t just about American immigration law. There was also American law creating forms of second-class citizenship — for African-Americans, of course, but also for other populations including Asians, Native Americans, Filipinos and Puerto Ricans. Not least, there were statutes in 30 American states forbidding and sometimes criminalizing interracial marriage. Those were of special interest to the Nazis.”

While ghouls on the Right want to weaponize the Holocaust as a means to silence critics of U.S. imperialism, those very critics on the center-left miss the way in which U.S. race and immigration policies have always been functional to a radical Right. By referring to the U.S. as the ‘Home of the Free’ Ocasio-Cortez, however ironically distanced she may have intended, eschews the fact that concentration camps on our ‘southern border’ are an extension of the racist policies that exist in the heart of U.S. empire, not an aberration of them.

Rep. Crenshaw tweeted further, “Clearly I need to explain that, in concentration camps, people are unjustly sought out and confined. This isn’t what is happening at the border. Migrants are illegally crossing our border. Most are asylum seekers, thus pending trial, so your expert definition doesn’t apply.” Putting aside his condescending sexism, Crenshaw’s logic rests on a fundamental assertion of national sovereignty, a logic that on some level Rep. Ocasio-Cortez and the entire Democratic party shares because they share the notion of closed borders. Although however she differentiates herself correctly from the cruel practices of this administration, this runs up against a contradiction; her reasoning rests on the normalization of national borders, borders which should be defended, monitored and policed.

The families apprehended by U.S. Customs and Border Protection (BCP) are fleeing organized crime violence in Central America (violence that is exacerbated by coup attempts at the hands of the U.S. State Department), thus adding to the horror of their apprehension, imprisonment and death. Ultimately, however, these families, and anyone else, should be able to safely cross into this country for reasons known only to themselves without the threat of violence. Families shouldn’t have to be escaping violence to elicit our sympathy and care, but should be welcomed here, or in any other locale, because they are our comrades in the international working class.

Homeland Security’s practice of separating and detaining children and families is not fundamentally cruel because it is a poor tactic of border enforcement, but because border enforcement is fundamentally cruel. Crenshaw’s logic is that because asylum seekers are not citizens, holding them indefinitely is not in line with the genocidal practices of the Holocaust. Because the asylum seekers chose to come here, they chose their confinement. But the “containment centers” are concentration camps, however someone ended up in one. Detainees are held in camps for indefinite periods, against their will, behind fences and barbed wire, with armed guards who will shoot them if they try to escape. The conditions are kept deliberately inhumane as a deterrent to future migrants. Further, besides operating concentration camps, the entire U.S.-Mexico border can be considered a twelve hundred-mile “killing field”. Border Angels has estimated that in the last twenty five years, 10,000  people have died attempting to cross the border. Up through the 2008 recession, most of these deaths were single men coming into the U.S. searching for work. Because these deaths were single men immigrating ‘only’ for economic reasons, these deaths have been invisible in our political discourse. But these men were part of the working class, with interior lives and friends and families whose death could have been avoided if not for the inhumane policing of our border.

The purpose of these killings, and of borders, is to fracture the working class of the Global South rendering it more difficult for the working class to organize against their imperialist bosses. After all, the workers who produce cheap commodities at the border maquilas produce profits for the same capitalists who refuse to pay Walmart workers a living wage.

What Rep. Ocasio-Cortez, who calls herself a democratic socialist, should call for is the abolition of the southern U.S. border, and right of  all working people to cross between the two countries freely. To hedge on this demand is to operate under Rep. Crenshaw’s logic, a logic of national sovereignty and border surveillance that only serves the interests of U.S. imperialism and capital.

We cannot rely on Democratic Party politicians to do our activism for us, as shown by Nancy Pelosi’s 4.6 billion dollar giveaway to fund Trump’s concentration camps. We have seen countless examples of important actions in the past few weeks. There are the actions by Jewish people in solidarity with migrants, including arrests in a New Jersey ICE facility, the protests, like the one in Boston that stopped traffic and the Wayfair workers strike in solidarity with migrants. People like Scott Warren, who left water for migrants crossing the desert will be punished by the U.S. as another deterrent against assisting migrants, but it is these acts of solidarity that help create the movement against these killing fields. Outside of the U.S., the German ship captain Carola Rackete was arrested in Italy for rescuing migrants from the Mediterranean. And it is time to go beyond these isolated actions and build a national movement to close the camps and open the borders. Because behind this demand looms the threat of the President and ICE to begin deporting a million people from the U.S., a boast and pledge from the government to commit crimes against humanity.

The migrants locked in cages or dying in the desert are our comrades whose struggle must be amplified in the streets by people of good conscience everywhere.