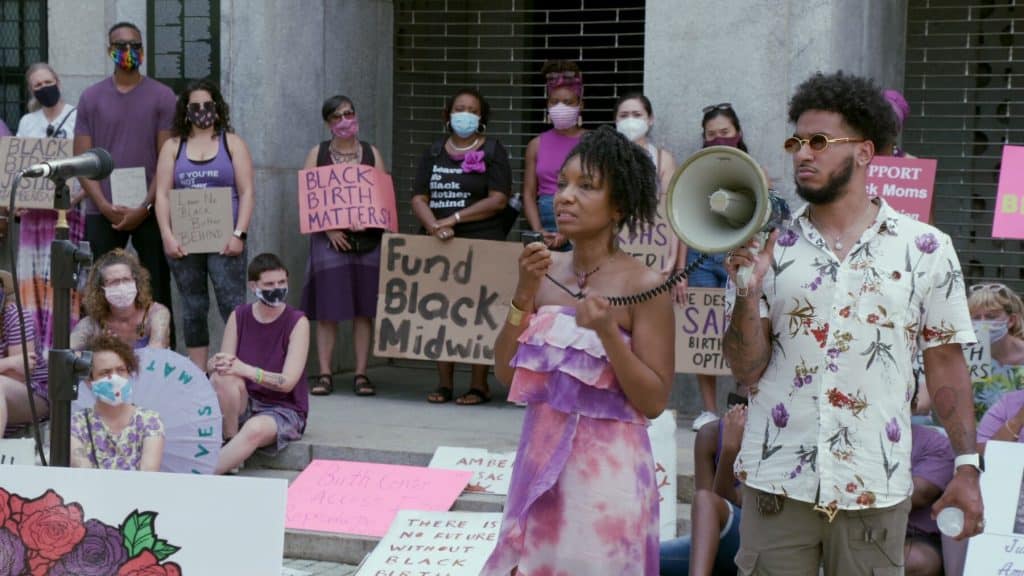 Amber Rose Isaac, Sharmony Gibson, and Kira Johnson wanted to be mothers. But as a result of the systemic racism ingrained in the capitalist system, they died in childbirth. They are part of the epidemic of deaths of Black women in childbirth.

In Aftershock, a documentary that debuted July 19 on Hulu, directors Tonya Lewis Lee and Paula Eiselt expose the disastrous effects of the for-profit medical industry on Black pregnant people. It highlights Black women who die in childbirth as a result of a capitalist system that puts profit before human lives — a system that sees Black women as commodities.

Not only does a medical system based on profit cause death and pain, but it also strips birth, an event that is transformative and meaningful for so many people, down to a joyless, mechanical problem that needs to be solved. And for all too many Black people, it leads to death. Three times as many Black women die in childbirth as white women.

The racial inequality in maternal care is inextricably linked to a privatized healthcare system that provides the rich and white the best care while leaving low-income people, who are disproportionately people of color, to die. Because of income inequality and America’s abysmal medical insurance system, Black women are far more likely to give birth in hospitals and clinics. There are no internists with specialized natal plans, and no individualized attention: often enough, there isn’t even emergency care.

The film makes it clear how the healthcare system contorts the love, friendship, and fears of Black people into something annoying, or insignificant, or even humorous. The needs and pains of Black women are ignored. The result for all too many is death.

Amber Rose Isaac died from complications in her pregnancy that the hospital should have easily spotted months earlier; her low platelet count had been dropping for months, which should have told doctors that a C-section was out of the question. Her partner, Bruce McIntyre III, described her blood as “water-like” as an inexperienced team cut her open after inducing labor. Because this took place in 2020 in New York City — at the height of the coronavirus pandemic — Amber Rose died alone.

The issue of poor maternal care in hospitals is not restricted to Black women, but as the film highlights, it is a product of both systemic racism and bigoted ideas among some healthcare workers. Amber Rose’s partner, Bruce McIntyre III, was subjected to hostility throughout the healthcare system, from security to the receptionists, and even to the OB treating her. He was called “Mr. Baby Daddy,” cheapening the relationship between the two, even while he did everything in his power to save her life.

Sharmony Gibson died in 2019 of medical malpractice two weeks after delivery: her partner, Omari Maynard, and mother, Shawnee Benton-Gibson, describe the chest pains and shortness of breath that made Sharmony’s last weeks painful and scary. In Aftershock, the two corroborate that the they were asked several times if Sharmony was on drugs, to which the answer was in each instance an unambiguous no. Instead of seeking the real cause of Sharmony’s pains, medical professionals focused on racist stereotypes.

While the racist ideas and perceptions of individual healthcare workers play a role, this is a systemic issue. Because Black women are far more likely to experience labor in hospitals, Dr. Neel Shah explains, they are also more likely to be pressured into having C-sections, a major surgery that has only been medically viable for a few decades. This surgery not only takes less time than vaginal birth, making it cheaper for the hospital, but it also costs more: C-sections have a high return on investment. Yet, C-sections are significantly less safe. But since profit comes before people, C-sections are imposed on low-income people, especially Black women. The general rate of C-sections in the U.S. is 32.7 percent — already a higher number. For Black women, it is 36.8 percent.

For the healthcare system, childbirth is source of profit, as are Black women. This monstrous view of other human beings is nothing new — Black women have been treated as commodities with varying degrees of openness since the first Black people were enslaved and brought to the Americas. We have come a long way — chattel slavery is over, and the civil rights movement made many gains. While there are more Black capitalists, politicians, and others in positions of power, this does is not change the underlying racist nature of the capitalist system, nor does it change the deadly mortality rate for Black women and people giving birth.

This commodification feels particularly vulgar in a hospital, where we would expect nurses and doctors to care about the suffering of those they protect. Aftershock exposes the callousness of this entire system.

Racism, misogyny, and capitalism operate in tandem to minimize Black mothers to units of labor, rather than vibrant human beings with goals and desires. As midwife Helena Grant aptly describes it, “The medical technocratic patriarchal model” pathologizes pregnancy itself and considers it a problem to be solved as quickly as possible.

Black women are more likely to be indispensable to the workforce, doing the jobs that simply make the modern economy operable, making it necessary to “treat” the pregnancy and push them back out into the labor pool as quickly as possible. As Grant explains, Black women’s ability to have their labor exploited is meticulously balanced with their ability to produce the generation whose labor will be exploited in the future.

This cannot be separated from the issue of forced pregnancy in the aftermath of the Dobbs decision. The same people who call themselves “pro-life” turn their back on the exorbitantly high rate of deaths of Black pregnant people. There will be more deaths of Black people as a result of this ruling. This decision is a direct threat to the women and AFAB people of color and those who will have no choice but to give birth in hospitals.

But pregnancy doesn’t have to be as dangerous as it is. Felicia Ellis, whose peaceful labor in a birthing center is contrasted with the havoc of birth in a hospital, reminds viewers that parenthood and birth can be beautiful, even spiritual for some. The price tag makes it clear that this is not an option open to everyone in capitalist America. Felicia Ellis, Sharmony Gibson, and Amber Rose Isaac all wanted to be mothers, but two were forever denied that right by a system that enforces birth rather than welcoming it.

Anti-choice America is doing everything it can to portray the pro-choice majority as callous and irresponsible. They pretend that they are somehow “pro-life” and that we are somehow anti-life. They tend to leave out that we are the ones fighting for the rights of parents and their children. They leave out that many of us have been protesting for Black lives.

Aftershock is punctuated by moments of community and family that anti-choice America cannot even fathom: the friendship between Omari Maynard and Bruce McIntyre III; the solidarity of the support group where men of color grieve the loss of their partners; the excitement of Sharmony’s child speaking to her mother’s portrait about an art project. When meditating on the tragedy of her daughter’s death, Shawnee imagines the relationship she might have had with Sharmony at the ages of 90 and 70: “I’m mourning growing old with my daughter … mourning what could have been.” There is no lack of love among this strong Black community, which has experienced such painful, deep racism. Reproductive rights include the rights of families to see each other safe and happy.

Watch Aftershock to learn about Black maternal mortality, but also to see how love is the backbone of systemic change. Systems of oppression create a cold, unfeeling, and brutal system of systemic racism and systemic oppression for low-income people and people of color. As the film shows, a key component of the antidote is community, and communities built on care and love create the shock waves that make people aware and active. That love is can and should drove activism, action and systemic change.