There’s a growing discontent in Brazil’s large working class that was partially expressed by two minor “national days of strikes and protests” held by most trade unions in Brazil, An upsurge in industrial unemployment comes hand in hand with austerity package bills that cut down on social security benefits and the budget of important programs as in the Federal Universities, amongst other ares. 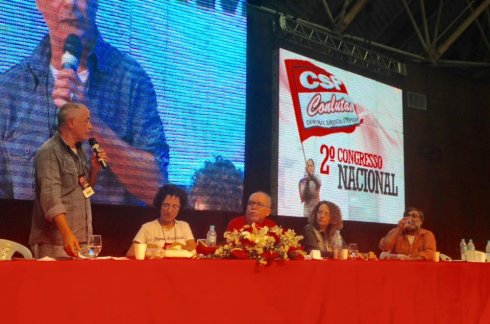 Those cuts are promoted by the Dilma government of the Partido dos Trabalhadores (PT). Such measures have sparked discontent and forced even the labor unions aligned with her PT government to respond with protests, as the ones held on April 15th and May 29th.

The official response by the major labor union in the country, CUT, has been of shy measures on the days of protest, not organizing its powerful 22million affiliates to really stop the country and face off with the government and the big business bills and measures. Nevertheless, CUT and other official labor unions are forced to respond to some degree because there’s a growing discontent in the working class, which is the traditional base for support for the PT. In that context the minority, but relevant CSP-Conlutas held its second congress.

The CSP-Conlutas is a labor and popular union, founded some years ago, that holds a very minor but relevant position in the working class, influencing some public sector workers and some industrial unions like the metalworkers of São Jose dos Campos, one of the most important automobile and airplane industrial areas of the country. It is the main left opposition union in the South American country. In that union movements to end oppression, housing movements, and other social movements also participate. The majority leadership in the union is of PSTU (a morenoist Trotskist organization) and where various PSOL groups and other socialist revolutionary groups like the MRT participate.

On the 4th of June, over 1700 workers according to official numbers descended upon the town of Sumare in the state of Sao Paulo, Brazil for its second national conference. Workers spent three days engaging in panel discussions and small group discussions about the national and international state of workers’ struggles.

Workers came from all over the country, representing a wide range of occupations- from metro workers to teachers to oil workers. Many of these workers are the protagonists of struggles in their home states. However, due to both the small numbers that came to the congress from the major Paraná and São Paulo strikes, and also, due to an organization scheme that made those protagonists barely speak in the congress, the CSP-Conlutas congress, missed the opportunity to fully express such struggles where its own militants play a role. The main debates organized by the majority leadership regarded not the actual strikes and what to learn from them, how to develop them, but a competition with PSOL as to who represents better the left in the country, all of that combined with a leftist speech in defense of an abstract general strike.

One of the major topics of the conference was sub-contracted or outsourced work. According to a new law project (PL 4330), all jobs would now be able to be sub-contracted, gutting hard won labor victories that prevent subcontract work in various sections of the working class. While the government backed unions say they are against this law, they organize simply to impose stricter rules on sub-contracted work.

At the conference, workers expressed the necessity to not only stop the expansion of subcontracted work, but to put an end to it. One of the disagreements expressed between militants of PSTU, the majority political party, and MRT, Revolutionary Movement of Workers was about this topic. MRT argued that subcontracted worker should become incorporated where they work, even as regular public workers. In Brazil, workers are hired for public jobs on the basis of an exam. MRT defended the need to incoporate workers into public positions without having to take this exam. PSTU argued that they needed more time to discuss and evaluate the proposal, despite this not being a new proposal by MRT, it is nearly a decade old, and one of the only unions affiliated to CSP-Conlutas in São Paulo, the SINTUSP that organize the USP university workers, has defended it for years.

Diana Assunção of the MRT and SINTUSP, argued that “It is not enough to fight against the law PL 4330. We must organize the 12 million subcontracted workers in this country who have a woman’s face, a black woman’s face, the face of an LGBT person… the face of a Bolivian or Hatian immigrant because the most oppressed sectors of society have the most precarious work.”

As a result of this conference, workers voted to build a general strike throughout Brazil in order to respond to government cuts, as well as the massive attack of workers that is PL4330. MRT agrees with fighting to build a general strike, but made criticisms of CSP’s role in organizing workers thus far. Throughout the country, many various sectors of workers are on stike. Teachers in particular The government based union will never play the part of coordinating a national movement because this would mean questioning the federal government. Yet, CSP has not taken up the role of coordinating a national movement by calling national or regional conferences to coordinate the struggle of categories on strike. Rather than building with a base of workers who are already mobilized in order to build a general strike, CSP is calling a general strike from nowhere, without taking into account how to develop the strikes already going one. In order to build an effective general strike, CSP must take on the role of organizing workers where they are mobilized and create a plan for national and regional struggles, mobilizing their base and calling on all workers to fight against the attacks that threaten their few hard earned rights as well as for advances for the working class.

Such differences expressed at the Conference mark some of the ongoing debates in Brazil’s socialist left on how to organize the workers given the crisis in PT government and its working class support, and what left alternative is needed.