Amy Coney Barrett appeared for her first day of confirmation hearings today. She has years of experience in attacking people’s rights, defending discrimination, and keeping the unjustly imprisoned in jail longer. The Supreme Court needs to go. 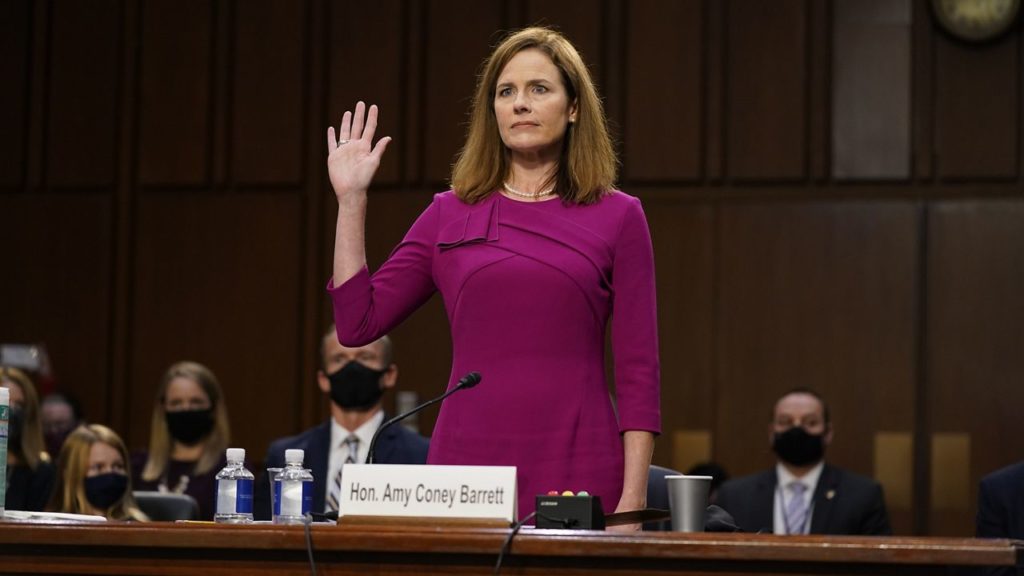 Today, Supreme Court nominee Amy Coney Barrett is appearing before the Senate for her first day of confirmation hearings. The Supreme Court is already an inherently undemocratic institution, in part because the sensibilities of nine unelected, unrecallable individuals can have an enormous impact on people’s civil rights. And Amy Coney Barrett is terrible. Really terrible.

Barrett is expected to be the deciding vote on future decisions restricting abortion rights, even though as of 2019, a study by the Pew Research Center found that more than two-thirds of Americans believe abortion should be legal in all or most cases — the highest support in more than 20 years. Only a little more than 10% believed the procedure should be illegal in all cases. Barrett has also received criticism for her membership in the strict Catholic sect People of Praise and her views on the separation (or lack thereof) of church and state.

The SCOTUS nominee has written that Catholic judges should “conform their own behavior to the Church’s standard,” although she has also argued that there are some situations when Catholic judges should recuse themselves from cases (e.g., situations involving the death penalty). However, her own actions betray her: as a legal clerk, she assisted Antonin Scalia on several such cases.

While readers might be more familiar with and concerned about Barrett’s stance toward abortion laws, she also has a history of terrible criminal justice decisions, among other issues. Here are five of the worst legal positions Barrett has taken — in no particular order.

1. Tried To Prevent Prisoners from Suing for Cruel and Unusual Punishment

In this case, which Barrett ruled on as part of the U.S. Court of Appeals for the Seventh Circuit, the prison guards were terrorizing imprisoned people by firing their guns into the air, which ended up causing injuries. The majority decision supported the prisoners’ right to file a lawsuit in this case, but Barret disagreed. She asked, “was it to maintain discipline or for the satisfaction of hurting the prisoner?” In the highly relative and subjective ruling, she argued that unless the guards were doing it with the intent of being malicious and sadistic, it was perfectly okay. “The guards may have acted with deliberate indifference to inmate safety by firing warning shots into the ceiling of a crowded cafeteria in the wake of the disturbance,” she wrote. “In the context of prison discipline, however, ‘deliberate indifference’ is not enough.”

In other words, terrorizing prisoners by shooting into the air isn’t enough to file a lawsuit, as long as the guards claim it was in the name of “discipline.” This sounds awfully similar to the police who claim deadly force is “necessary” because they felt “threatened.” And according to Barret, being “indifferent” to prisoner safety is perfectly fine. The majority opinion supported the prisoners’ right to file a lawsuit.

In 2017, Barrett refused to hear a case about segregated work environments, arguing that a “separate-but-equal arrangement is permissible.” The situation: In one area of Chicago, AutoZone was moving all of its Black employees to one store, and all of its Hispanic employees to another store, regardless of which store the employees lived nearest to or preferred to work at. The original court ruled in AutoZone’s favor, and Barrett’s Court of Appeals refused to reconsider the ruling.

The very premise of anti-segregation laws is that separate is never really equal. In this case, even if the stores and their policies are identical, employees will not have an “equal” experience at either store, because of how the location will impact their lives — in increased transportation time and costs, for example.

In late 2019, the Department of Homeland Security tried to issue a new, much broader interpretation of the “public charge rule,” which allows the federal government to deny visas, green cards, or other “residency status adjustments” to immigrants “likely to require public assistance in the future.”

The previous interpretation applied only to immigrants who were primarily reliant on the government for assistance. The new interpretation applies to anyone who receives twelve months (consecutive or nonconsecutive, over a three year period) of any kind of government assistance, regardless of how much, or anyone who the government anticipates will need government assistance. Additionally, the “months” are stackable; receiving both food stamps and Medicaid for six months would still count as twelve months. The other two justices on the Court of Appeals voted to stop the rule change in Illinois, but Barrett voted that it should go through.

The public charge rule, in both its former and newly proposed forms, essentially punishes immigrants for going through hard times — even temporary ones. Barrett wants such punishments to apply to even more people.

4. Defended a Court that Had Violated a Man’s Rights

In the case Sims v Hyatte, Sims, a Black man who was sentenced to 35 years in prison for attempted murder, found out almost two decades after he was sentenced that the victim had been hypnotized prior to the trial. Sims filed a petition accusing the prosecution of suppressing evidence, since Indiana law has provisions regarding the admissibility of evidence involving hypnosis. The Seventh Circuit Court of Appeals found that the prosecution had violated Sims’s rights, but Barrett dissented. She agreed that Sims’s rights had been violated, but said it was reasonable for the state court to conclude that they had not been violated, and therefore their decision should not be overturned.

This case is emblematic of many of Barrett’s decisions, in that she argues for a clearly harmful — and in this case especially, absurd — position using a series of legal technicalities that are irrelevant and inscrutable to the average person. A man’s rights were violated. All of the justices agreed on this point, and two of them managed to make legal arguments that that is indeed wrong. Barrett is not explicitly saying she doesn’t care about the rights of the accused — and undoubtedly any opinion she writes about Roe v. Wade will be couched in legalese — but law is always a matter of interpretation and argumentation, not objective truth. A skilled lawyer can make a legal argument for just about anything, so what they choose to argue is indicative of their politics.

5. Tried to Enforce Outdated Mandatory Minimums to Keep a Man in Jail for 25 More Years

In this case, Hector Uriarte and his co-defendants had already successfully won a remanding of their sentences. This means that because their original sentencing has been improperly calculated, their sentences would be cancelled and new sentences would be determined. In between the original sentencing and when Uriarte received his new sentence, the First Step Act was passed, which dramatically decreased the mandatory minimum sentence for one of his charges by 25 years.

While the majority ruled that the First Step Act applied to Uriarte and he should receive the new, lower minimum sentence, Barrett argued in favor of keeping him in prison for 25 additional years using the previous law. If Barrett had her way, Uriarte would have spent more than a third of the average American lifespan in prison.

An Enemy of the People

Not only is Amy Coney Barrett a threat to rights like safe, legal abortion, the Affordable Care Act, and same-sex marriage, but she also has a terrible record on criminal justice and xenophobia. The five cases described here are only some of her abhorrent rulings on these issues. The Supreme Court shouldn’t exist at all, but until that day comes, Amy Coney Barrett certainly shouldn’t be part of it.