For an Anticapitalist in Mexico City’s Constituent Assembly

Against all odds, Sergio Moissen, socialist professor and independent candidate, managed to hand in more than 80,000 signatures to the National Electoral Institute (INE). 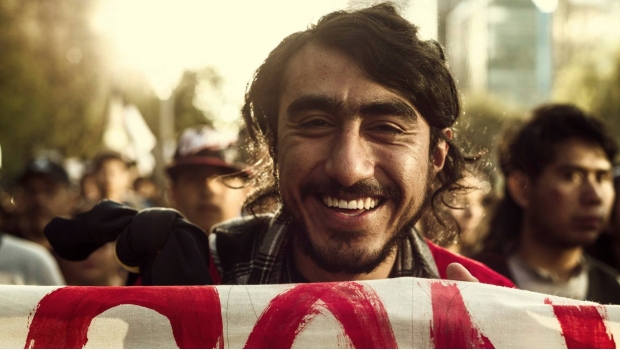 After an intense campaign, Sergio Moissen and alternate delegate Sulem Estrada delivered tens of thousands of signatures to the INE in order to meet the strict requirements of anyone seeking to participate in the Constituent Assembly as an independent candidate. The INE will now review the signatures in order to validate Moissen’s independent candidacy as he vies for a place among the 60 delegates that will form the Constituent Assembly of Mexico City.

One of the last times a constituent assembly was convened in Mexico to create a new constitution was in 1917, two years after the forces of Pancho Villa and Emiliano Zapata took the capital city during the Mexican Revolution. Almost 100 years after that historic event, the city known as the Federal District will become the last entity to have its own constitution.

What is really at stake is the future of Mexico City, contested by the following forces: one one side is the current president Enrique Peña Nieto (PRI) with the support of a sector of the PRD — party of Migual Ángel Mancera, current head of Government of the Federal District; on the other side is the emergence of the National Regeneration Movement (MORENA), a new party launched by Andrés Manual López Obrador after breaking from the PRD. This party grew exponentially in the last midterm elections in June 2015 as a result of the crisis faced by the traditional parties following the disappearance of the 43 Ayotzinapa students.

One of the last times a constituent assembly was convened in Mexico to create a new constitution was in 1917.

After the latest political reform, the Federal District will become a legal entity called Mexico City, elevating its status to that of the other states that make up the country. Its constitution will be written by a Constituent Assembly that will have 100 members; 40 of whom will be hand picked by Peña Nieto, Mancera and both chambers of Congress. The other 60 constituent delegates will be elected in June through popular vote.

However, this is yet another undemocratic measure to prevent the expression of the popular discontent with the Mexican regime that has been building since 2012. This is evidenced by the fact that almost half of the constituent delegates will be handpicked by reactionary figures like Peña Nieto and his puppet Mancera, both with a long history of repression, including the June 10, 2013 demonstration in which Sergio Moissen was apprehended and tortured by Mancera’s police.

Secondly, reducing the number of deputies elected through popular vote lowers the chances for new parties like MORENA to have a place in this Assembly and criticize (though only moderately) the lack of democracy in Mexico. MORENA gained almost 30 percent of the seats in the Legislative Assembly (Mexico City’s local Congress), but with 40 deputies chosen by the president and head of Government, MORENA could get of 20 percent of the seats, having a clear disadvantage against right-wing parties like the PRI, the PAN and the degenerated PRD.

There is also the fact that the Mexican electoral regime has very strict rules making it difficult for anyone to run as an independent candidate. Each person must have the support of an existing NGO (or create one) and gather almost 75,000 signatures (the number of seats in an average American football stadium). The aspiring candidates can not count on any resources other than their own.

The proposals of Moissen and Estrada embrace the needs of the oppressed people of Mexico City.

Through their campaign, Sergio Moissen and Sulem Estrada, who make up the “Anticapitalist Workers in the Constituent Assembly” slate, have defied the three main parties in Mexico, all of which are notorious for governing the city in favor of big business and at the cost of lowering the living standards of the majority of the city’s population.

The proposals of Moissen and Estrada embrace the needs of the oppressed people of Mexico City— demanding laws against femicides and human trafficking, for the legalization of marijuana, for unrestricted access to public higher education, and that no elected official should earn more than the average teacher and should be subject to recall at any time.

Both teachers aim to enter the Constituent Assembly to challenge the current political powers by expressing the voices of workers, women and youth. Their strength is proof of an enormous militant activity. Their students traveled through public plazas and dozens of Metro stations facing arrests in order to achieve the 75,000 signatures they needed.

Their campaign ended with a rally at the Juárez Monument in the Historic Center of Mexico City with hundreds attending to hear their speeches and the musical acts that played afterwards. It is a situation unheard of in Mexico after decades of political office being restricted to the bosses’ parties (in particular, the PRI, the PAN and the PRD) that a left, anti-capitalist candidacy has a huge chance of obtaining an independent candidacy.

Both teachers aim to enter the Constituent Assembly to challenge the current political powers by expressing the voices of workers, women and youth. Their strength is proof of an enormous militant activity.

This candidacy is backed by the Movimiento de los Trabajadores Socialistas (Socialist Workers’ Movement, MTS) a sister organization of the Partido de los Trabajadores Socialistas (Socialist Workers’ Party, PTS) in Argentina. The MTS is cautioning that the undemocratic Mexican regime may block this candidacy, and is calling for a broad mobilization of workers, women and youth in the streets to guarantee that the anti-capitalist left enters the Constituent Assembly to express the demands of the oppressed in Mexico.