Argentina Is on the Brink of Legalizing Abortion: An Interview with Socialist Feminist Andrea D’Atri

On Tuesday, the Argentinian Senate will vote on a bill to legalize abortion. Left voice interviews Andrea D’Atri, a leader of the Party of Socialist Workers (PTS) and founder of the socialist feminist group Pan y Rosas, about what this bill means, how the movement developed, and the tasks that lie ahead. 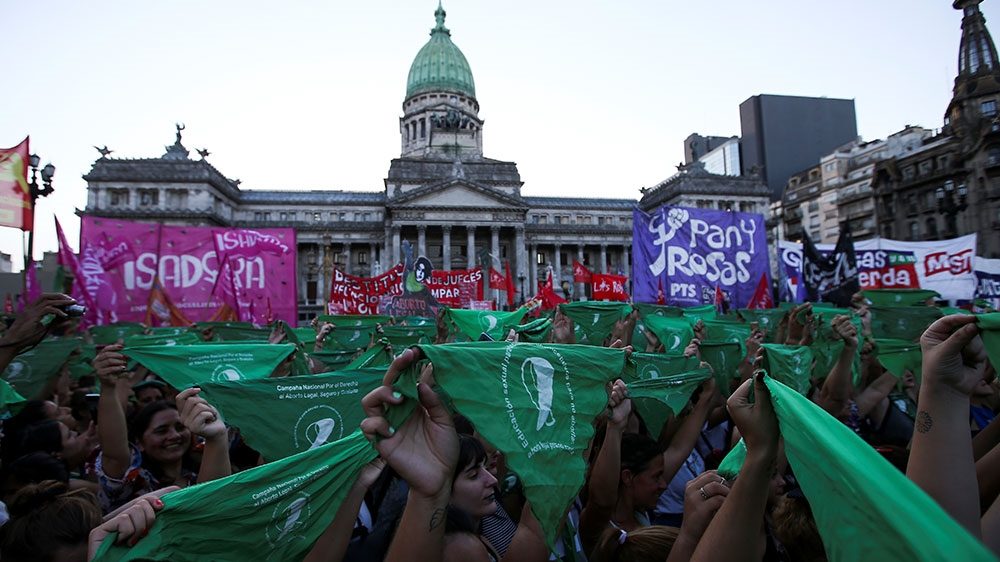 On Tuesday, the Argentinian Senate will likely pass a bill to legalize abortion. Earlier this month, the House of Representatives approved the measure, which is supported by the government of President Alberto Fernandez. This is a victory for the feminist movement and the Left in Argentina, and is an example for feminist movements around the world. If the bill passes, the right to abortion will not be not a gift from the the center-left government — it will have been won thanks to the tenacious mobilization of the feminist movement and the revolutionary Left that has fought this struggle for decades.

However, there are limits to the bill, and we must continue to organize to fight for our rights. Left Voice interviewed Andrea D’Atri, PTS member and founder of the socialist feminist organization Pan y Rosas. In this interview, Andrea explains how this right was won, the limits of the bill, and what the tasks are for revolutionary socialist feminism in Argentina.

It seems that abortion will be legalized in Argentina. What does this mean for people in Argentina? What is the significance for the feminist movement around the world?

On Tuesday December 29, the Senate will vote on an abortion bill that has already passed the lower house of Congress. It’s not yet clear if this bill will become law. And unlike previous bills that came directly out of the movement, this bill was written by the executive branch and sent to Congress.

The fight for abortion rights in Argentina has a long history and tradition. It started in the 1970s and then was brutally interrupted by the U.S.-backed military dictatorship that ruled from 1976 to 1983. And then in the 1980s, this struggle was taken up again and became massive. In 2018, the Macri government was forced to debate an abortion bill on the floors of Congress. It passed the House of Representatives, as the new bill has, but was then rejected in the Senate. We hope that doesn’t happen again this time around.

There are other differences between then and now. In 2018, the bill that was put on the floor was written by the the women’s movement organized in what was called the “Campaña Nacional Por El Derecho Al Aborto” — the national campaign for abortion. This is a coalition of organizations and activists for the right to abortion. The recent bill, on the other hand, comes from the ruling coalition in Argentina.

There are estimates that put Argentina at the top of the list of countries with the highest number of clandestine and unsafe abortions. It is estimated that there are 750,000 births a year and 500,000 abortions. Of those 500,000 abortions, there are 300 to 500 deaths every year as a result. Many of these deaths are caused by the unhygenic conditions of clandestine abortions carried out by non-medical personel. So it’s important to stop the deaths of women and other pregnant folks who are young and poor. Thus, we need legal abortion that is free at all public hospitals.

Winning abortion rights in Argentina is particularly difficult because of the strong influence of the Catholic church. Here, the state maintains the Catholic Church at the behest of the national constitution. In other words, the Church receives an economic stipend by the state, and for centuries has been a beneficiary of state donations in the form of property and land. Further, they are exempted from paying taxes. During the military dictatorship, some decrees were even implemented wherein the Catholic Church received funding equivalent to a judge for each Bishop and additional monies for priests. It also receives grants for trips to the Vatican and to subsidize private religious education.

So, in order to fight for the right to an abortion, we have to fight against this very powerful Catholic Church.

Why is this law being voted on now and what are its limits?

In this case, the government of Alberto Fernandez presented its own abortion law, not the one that reproductive justice advocates have been demanding over the years. The government’s proposal, as opposed to the one by the national campaign for abortion, includes a moral objection clause as a guarantee for doctors who don’t want to perform abortions. We think this limits our rights because the way that moral objection is written implies that an entire institution, an entire hospital, an entire city, or even an entire state can declare themselves moral objectors. If that’s the case, then the right to abortion will be severely limitated for many people.

For example, in Uruguay, where the moral objection clause also exists, there are provinces where there is no access to abortion at all even though on paper abortion is legal. We think that this should be denounced as a limit to our basic rights. And this limitation didn’t just fall from the sky — it has to do with pressure from the Catholic and Evangelical Church, as well as with the negotiation done by the Peronist government to get votes in favor of this law by some of their own members of Parliament who were against it. Peronism, after all, is a broad movement that includes various sectors but is united in backing the smallest reforms to try to buy off workers and the popular classes.

In all political parties, there are members of Congress who are for and against abortion, except for those of the Left and Workers Front who are united all in favor of abortion. Thus, the government sent this bill to be voted on while at the same time having very significant detractors within their own ranks. They must thread the needle to get the law passed while not shattering the consensus between pro- and anti-abortion congresspeople within the governing front.

The primary tool for this is the conscious objector clause. Other changes may occur in the Senate, or there may be changes when the executive branch decides how to execute the law. We think that we also need to denounce any changes that affect the right of everyone to access a safe and legal abortion in the hospital of their choosing.

At the same time that the law is discussed in the Senate, there will be a vote in the House of Representatives on pension and welfare reform. Another austerity bill has been proposed which will reduce the stipend for retirees as well the per-child stipend to impoverished mothers. 60 percent of retirees are women, and they make up the poorest sector of retirees, so they will be struck twice by this austerity plan.

So, while the Senate is legalizing abortion, in the House of Representatives, they will be passing these cuts that will affect women, and especially elderly women who have worked their whole lives, and mothers, particularly single mothers.

How did we get to this point? How has the feminist movement in Argentina developed?

For 35 years, there has been a National Women’s Conference that brings together thousands of women from all over the country to a different location each year. Working-class people come from all over — people of all ages and students.

At the Conference in 2003, they started to organize the National Campaign for Abortion Rights. In 2015, the “Ni Una Menos” (Not Even One Less [Woman]) campaign emerged because of the many femicides which had occurred. Massive mobilizations, beginning on June 3, 2015, broke out and brought a million people to the streets across the country. It was an example too at the international level which was replicated in countries across Latin America, but also in some European countries like Italy and Spain. The Ni Una Menos movement had several iterations, and there were massive marches in response to some particularly brutal femicides that shook the country.

Ni Una Menos is also a precursor to what in 2018 turned into the “green wave” for the right to an abortion.1 Many young people who had never participated in the feminist movement got into the movement through Ni Una Menos — sometimes at just 13, 14, or 15 years old. Then, in 2018, they were the undeniable protagonists of the fight for abortion rights — although it was massive in general. If we win the right to an abortion, it will not be because the “dinosaurs” in Congress — as they are popularly called — had a change of heart. It will be because of the Argentine feminist movement and these young people who mobilized for our rights.

You lead the group Pan y Rosas. What is Pan y Rosas, and how do you see the fight for abortion rights?

Pan y Rosas (Bread and Roses) is a socialist feminist group which is part of the broader Argentine women’s movement, a movement that has a long tradition of organization and struggle that is unique in the world. Pan y Rosas participates in the movement and is part of the Left and Workers Front, the only electoral bloc which doesn’t only fight in the streets for the right to an abortion, but also fights in Congress. Every member voted in favor of the right to an abortion. 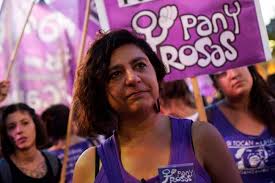 Pan y Rosas started out as a group of about 30 women who studied at university. And now, it’s a movement of well over 3,000 people — the majority of whom are working class, although there are still some students involved. There are domestic workers, women workers in factories, as well as teachers, medical workers, and young precarious workers who work for the “apps” (like Uber) and at call centers. We have workers from all sectors in our ranks — young people and not-so-young people. Additionally, Pan y Rosas organizes womens’ commissions at university, as well as in the unions and workplaces — many times having to confront the union bureaucracy. We also organize womens’ commissions in factories where the majority of workers are men because we want to organize the workers’ wives and partners, their daughters or mothers around the workplace struggles. These womens’ commissions play a role in supporting their partners’ struggles, but have also organized women so that they won’t be isolated from the struggle.

For Pan y Rosas, the right to decide about our own bodies is a basic right; a right that isn’t guaranteed in the 21st century in the degraded capitalist democracies of Argentina and other countries. It’s a problem of public health that clearly has a class element: due to unsafe and clandestine abortions, the people who die are the poorest, the daughters of the working class in Argentina, the children of the precarious and unemployed working class.

We fight against capitalism for a society that is free of all exploitation and oppression, but we also need to fight in every struggle that allows us to yank some rights from the capitalist state. We do this so that we can live in better conditions and equality, while still fighting for that better society where true equality has been reached.